HomeNewsRatings: 2019 Perodua Axia 1.0 AV - Saves on fuel, but it could be better 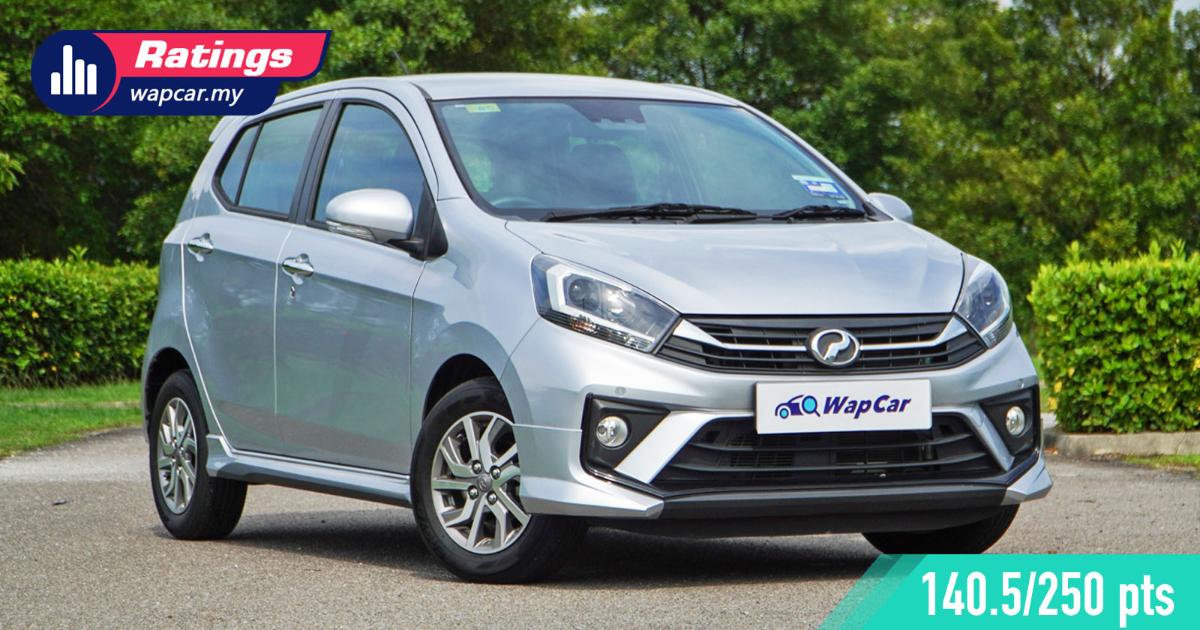 But does its low price make for a good purchase? Let's find out by putting it through our WapCar Rating system. 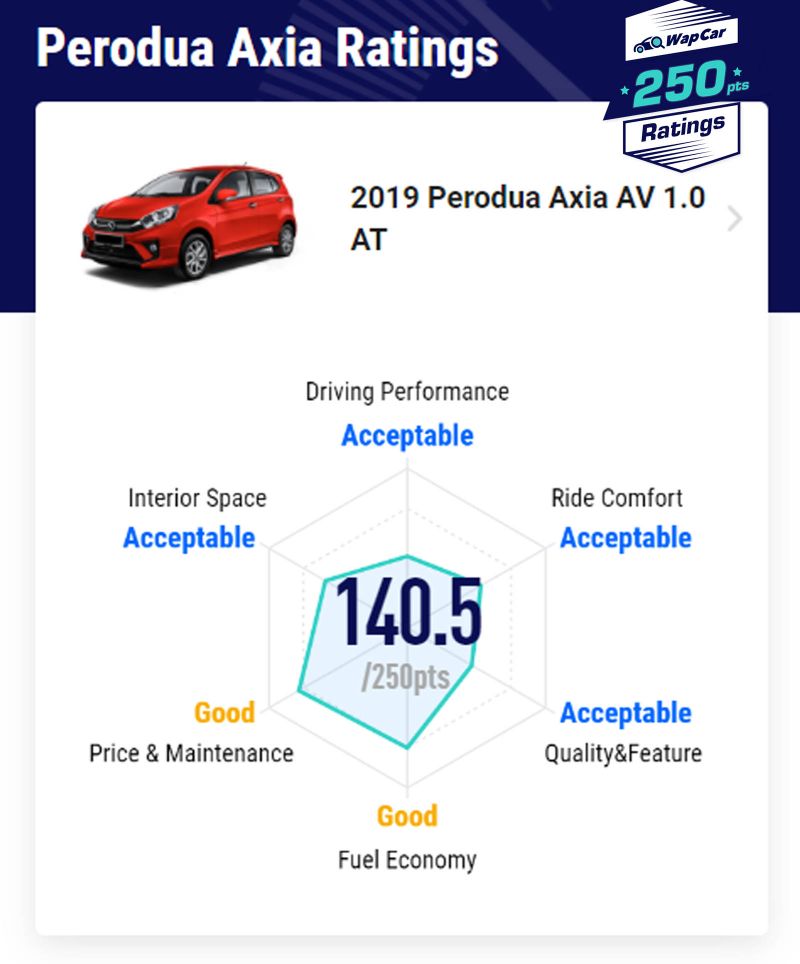 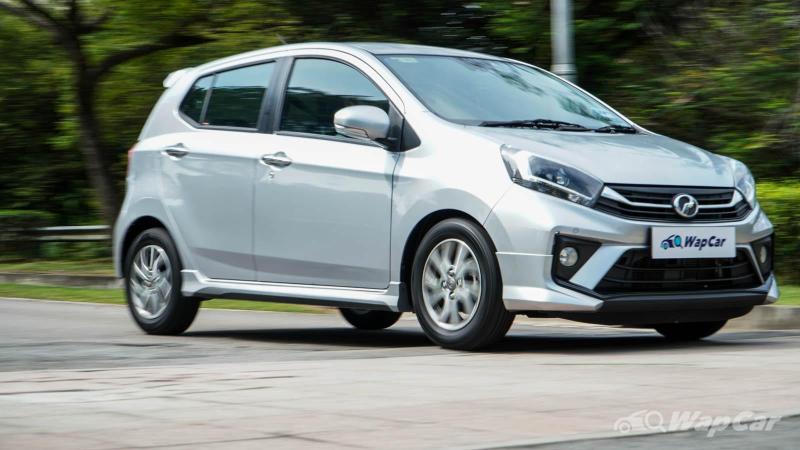 With a century sprint time of 17.2 seconds, overtaking is a tall order for the Perodua Axia (Even the larger Aruz clocked 15.7 seconds). 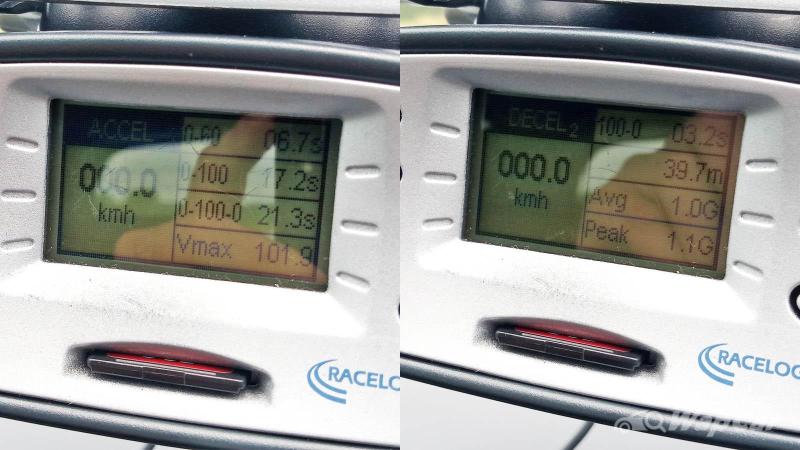 Driving uphill is not great in the automatic Axia, even with the gear override. Unfortunately, the manual transmission is only available in the Axia E since the 2019 facelift. 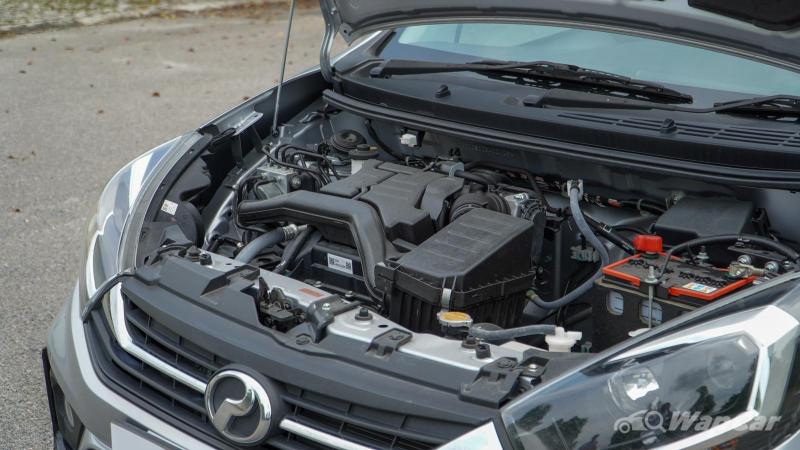 Power aside, the Axia is excellent for city driving due to its small size and small turning radius. For casual drivers looking for a budget A-to-B car, there's not much to complain about. 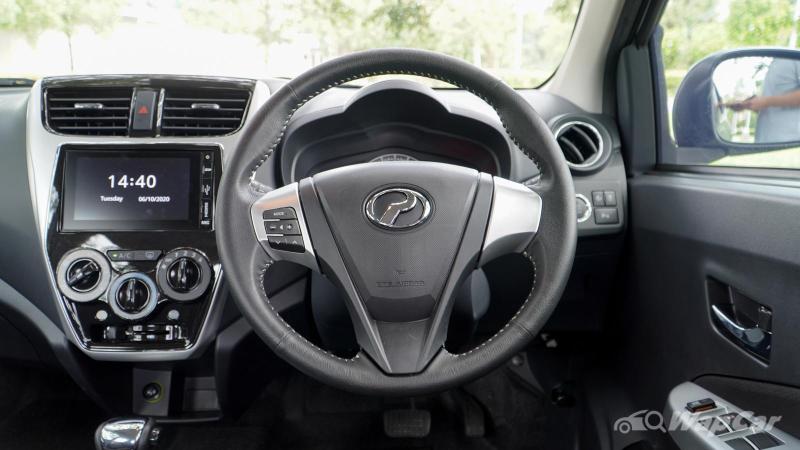 The steering feels a bit vague and the damping could be improved, but they are not big issues for normal city driving. 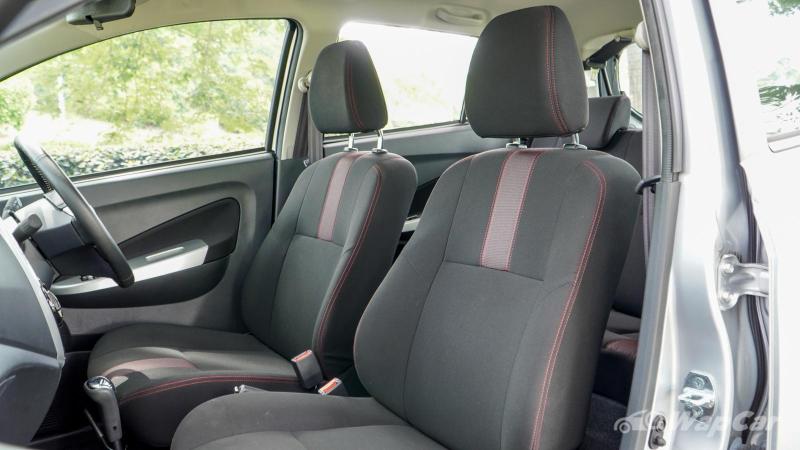 The fabric seats in the Axia AV don't offer any side support. However, they are adequately soft and comfortable. 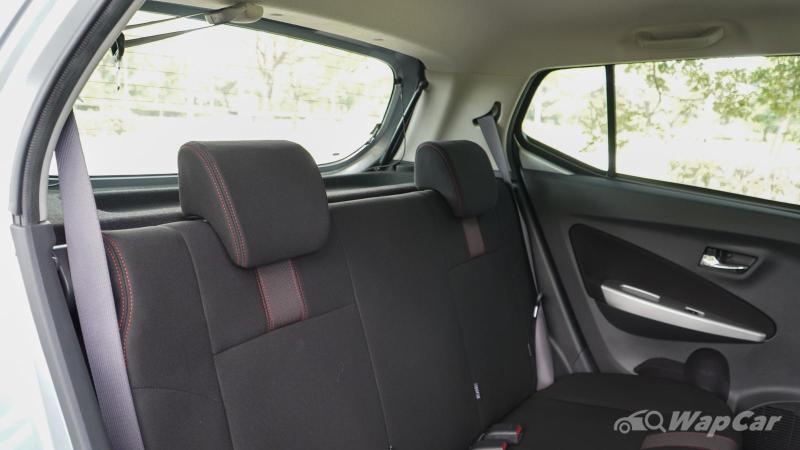 There is only one recline angle for the back seats, but the Axia compensates with adjustable headrests.

Unfortunately, the cabin gets rather loud at high speeds.

Engine refinement is one of the causes, but the main culprit here is road noise. 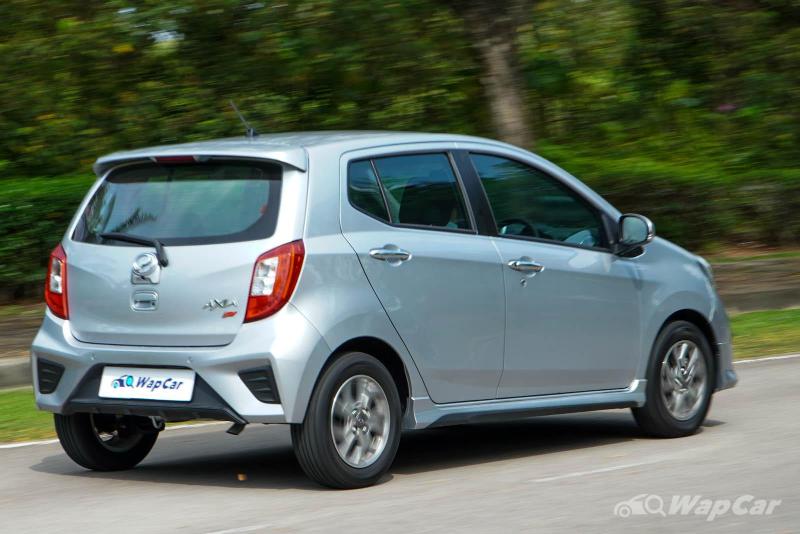 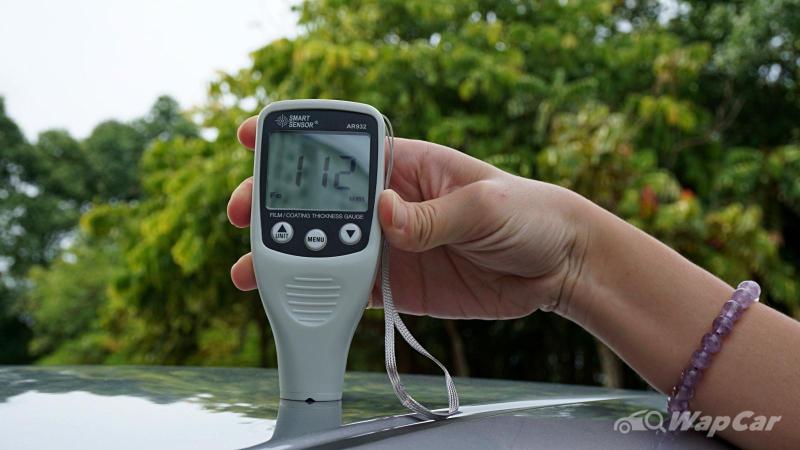 For a car of its price, the Perodua Axia's build is well done. Things are very consistent in terms of panel gaps and paint thickness. 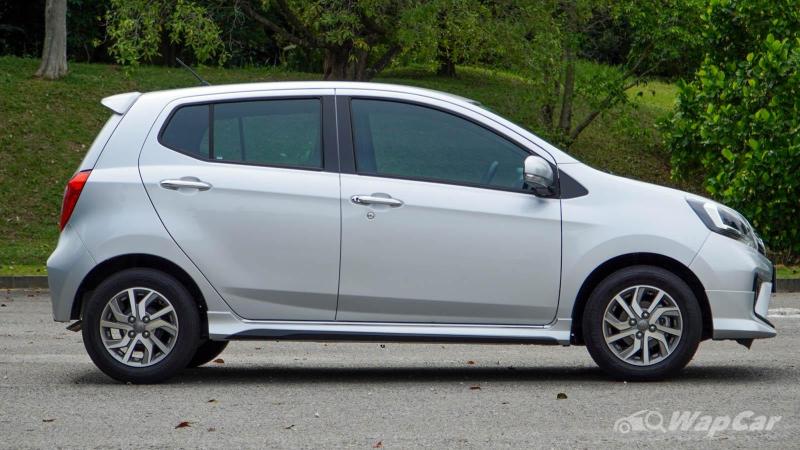 The exterior materials used are reflective of the Perodua Axia's price range.

The quality of the hard plastics used is decent and has a good finish. The build quality is good considering the car's price, and no obvious creaks and rattles were detected during our test drive. 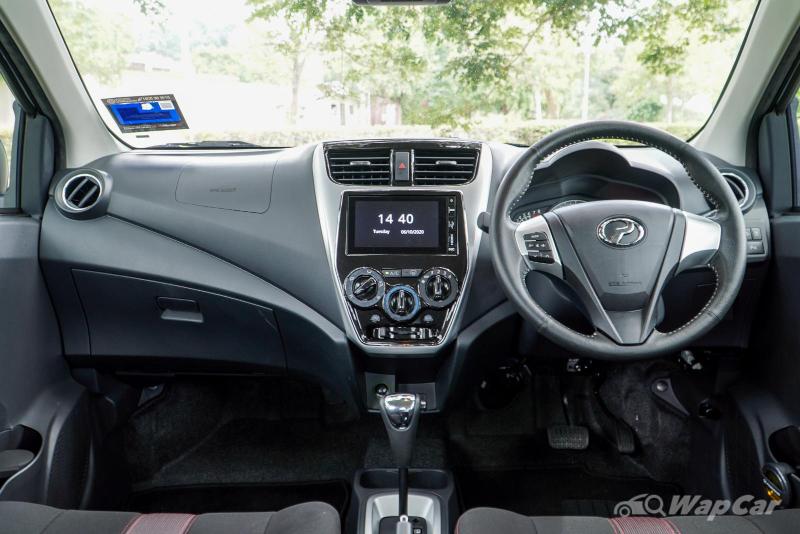 The only touch point with some "premium" feel is the leather-wrapped steering wheel with media controls.

Speaking of that, the infotainment unit could use some improvements. Having modern phone connectivity (Android Auto/Apple CarPlay) would make things a lot more convenient. Sound quality could be better too. 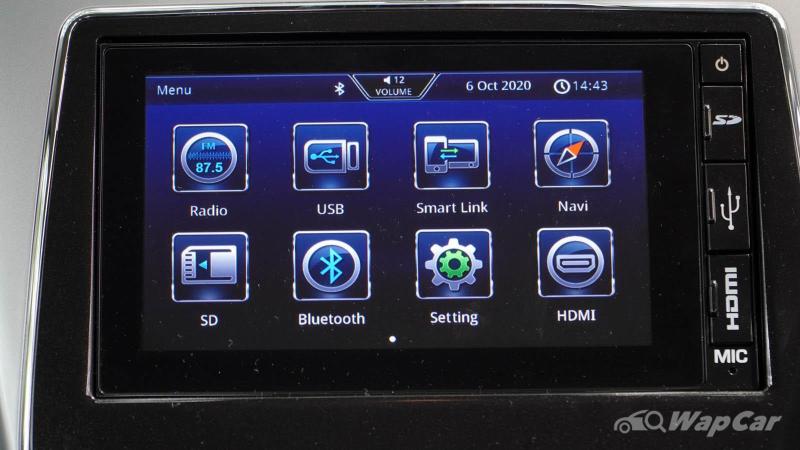 There's nothing we can really classify as a luxury feature in the Axia. What it boasts is the Perodua A.S.A. 2.0 which helps you stop the car in emergency situations. 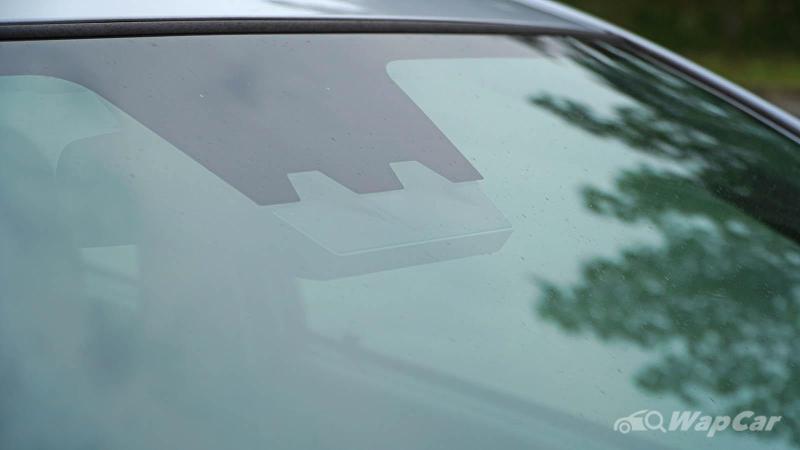 We did give this a try, and the A.S.A 2.0 acts as a supplementary system. The braking force is not that strong (unlike cars that lock the EPB) and requires you to press the brakes. Still a good feature for an entry-level car. 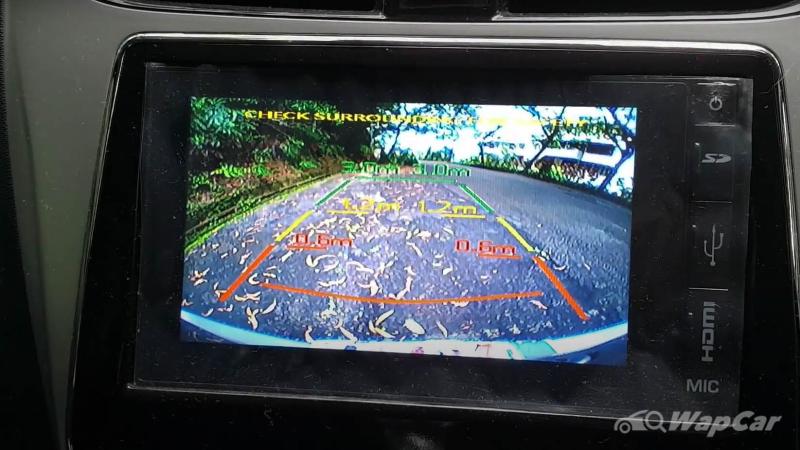 Added conveniences in the Perodua Axia 1.0 AV are the reverse camera and keyless entry. 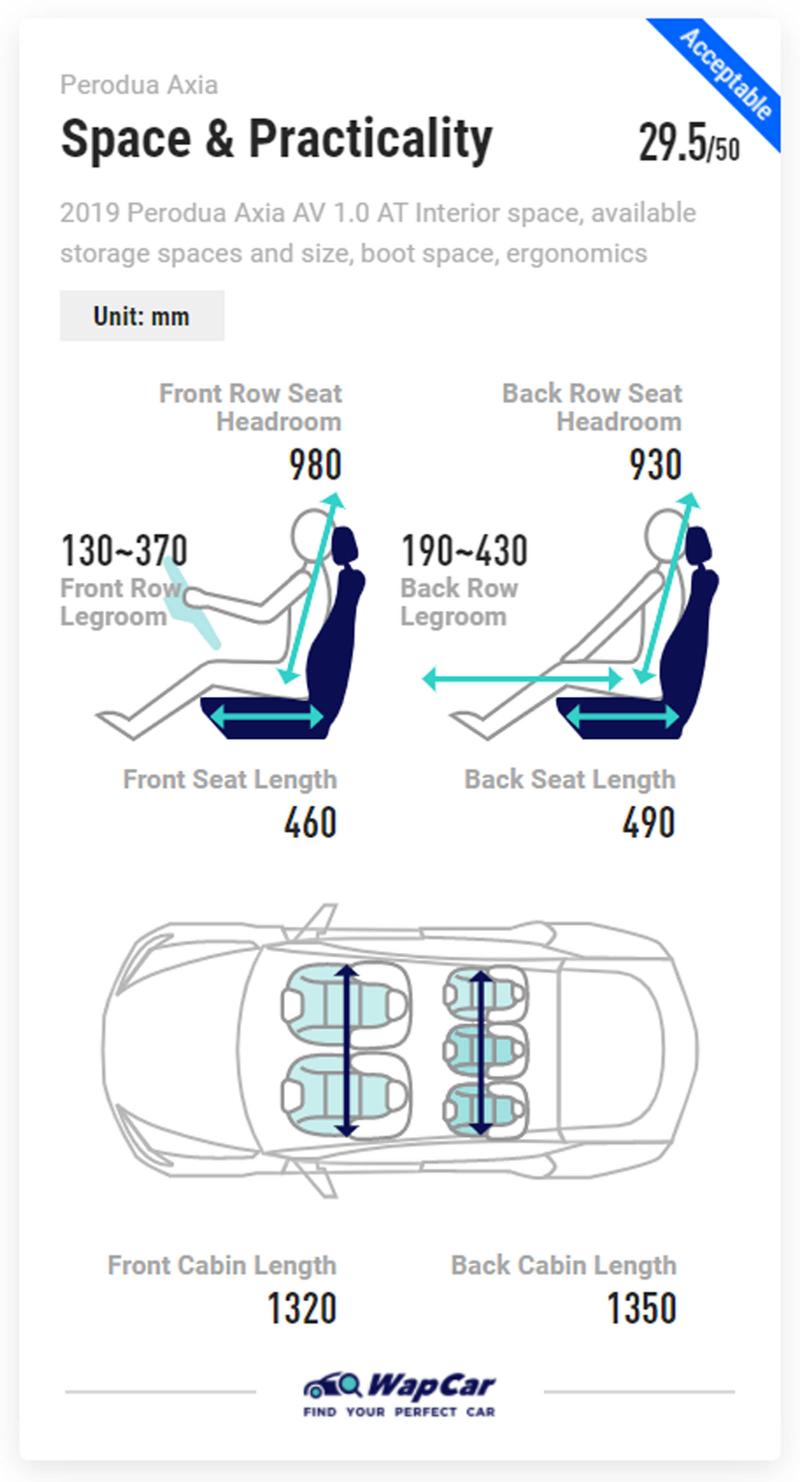 Space in the front row of the Axia is actually generous. Even a 185 cm tall adult can sit comfortably in both driver and passenger seat (Only the driver seat has height adjustment).

Second row space is impressive too with generous legroom and adequate headroom. 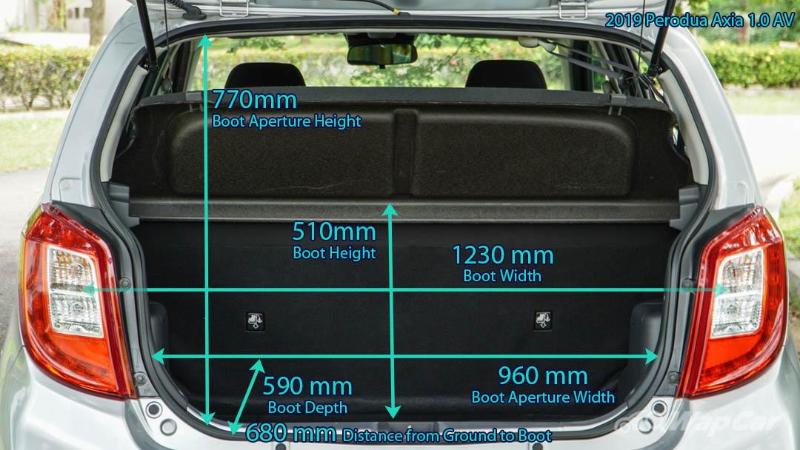 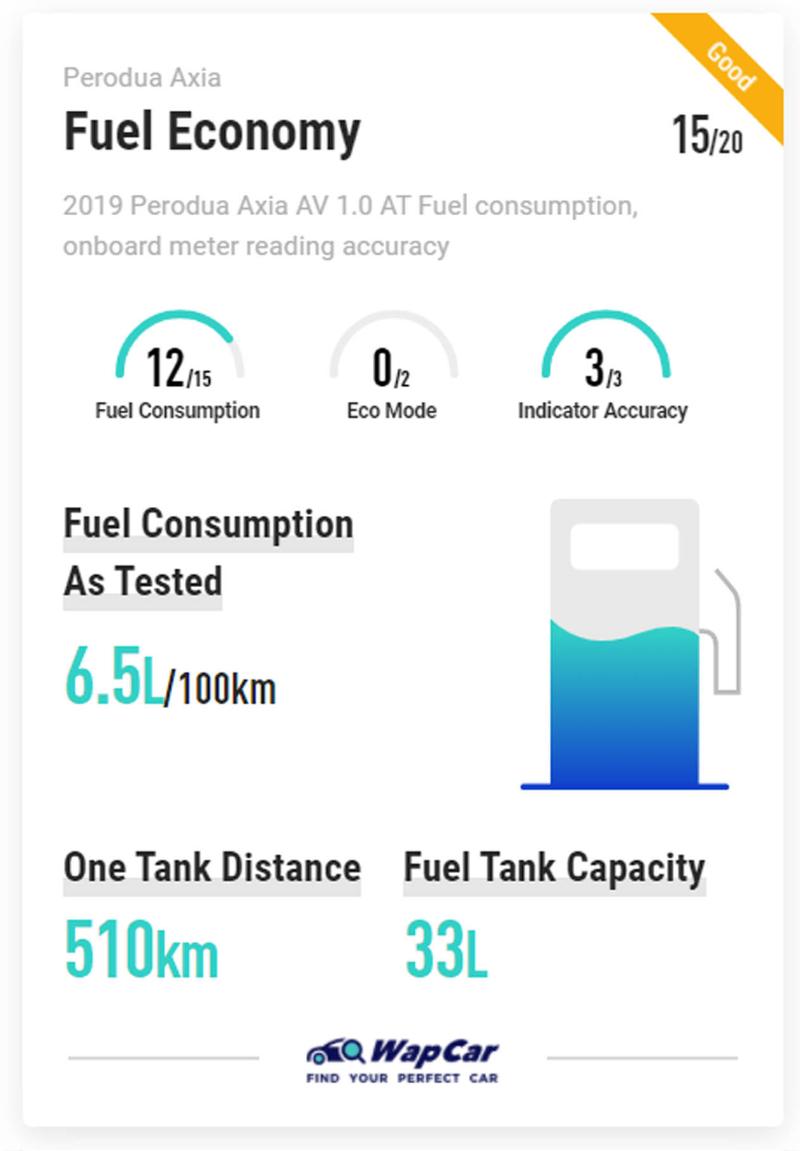 As expected from the Axia's small displacement engine, fuel consumption is low. After driving for 113.3 km and refuelling 7.323 L, a calculated fuel consumption of 6.5 l/100km was obtained. 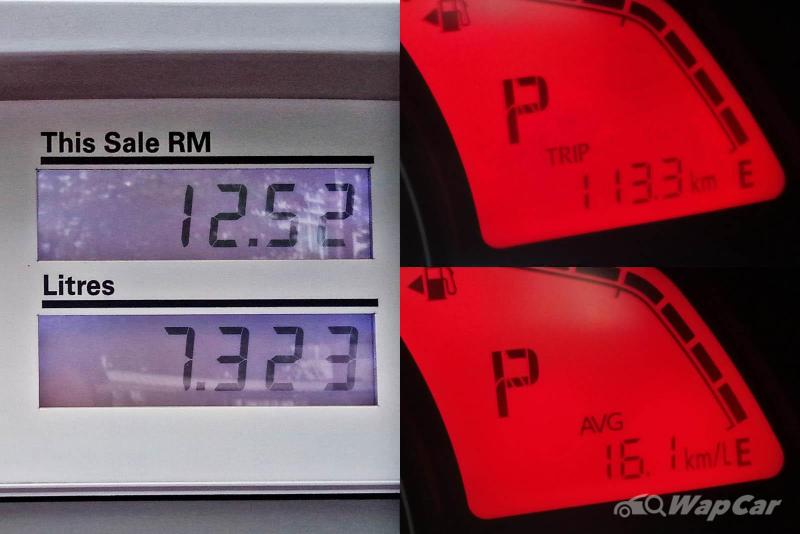 The car reported a fuel consumption of 6.2 l/100km, very close to the tested figure.

However, the Perodua Axia's fuel consumption is not very impressive since bigger cars like the new Honda City and Nissan Almera are capable of lower figures.

Perhaps with an improved powertrain, less fuel could be used in the Axia. 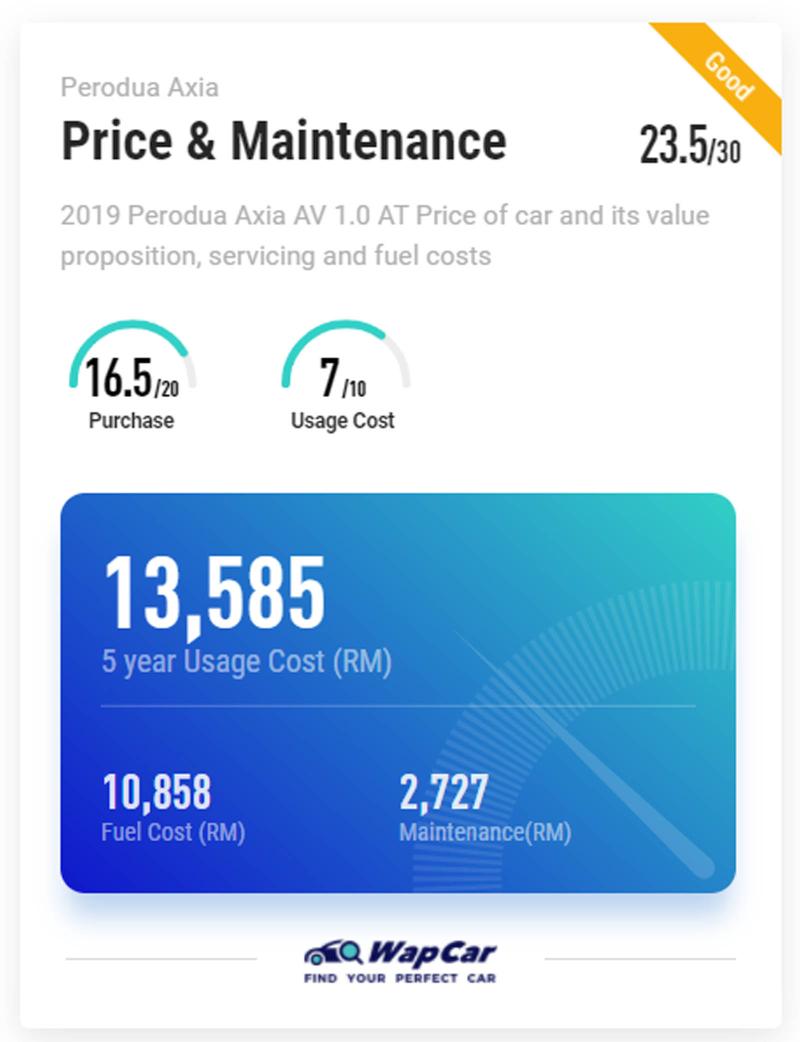 The main appeal of the Perodua Axia is its price, but it's not the same case for all of its variants.

With the SST exemption in place, the Perodua Axia AV starts at RM 41,427, which is more expensive than the RM 39,300 Proton Saga Premium.

If you want to get your money's worth, check out the GXtra variant that starts at RM 33,940 with the SST exemption.

For maintenance cost, free labour is only given for the first service at 10,000 km. 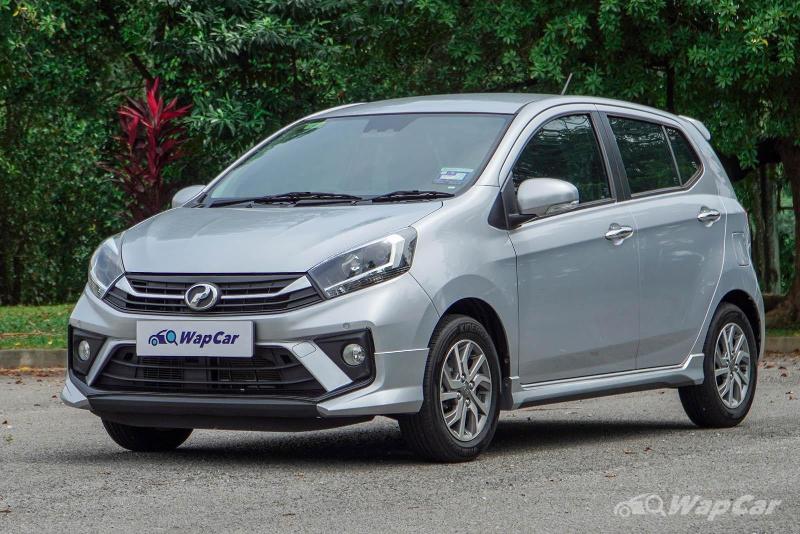 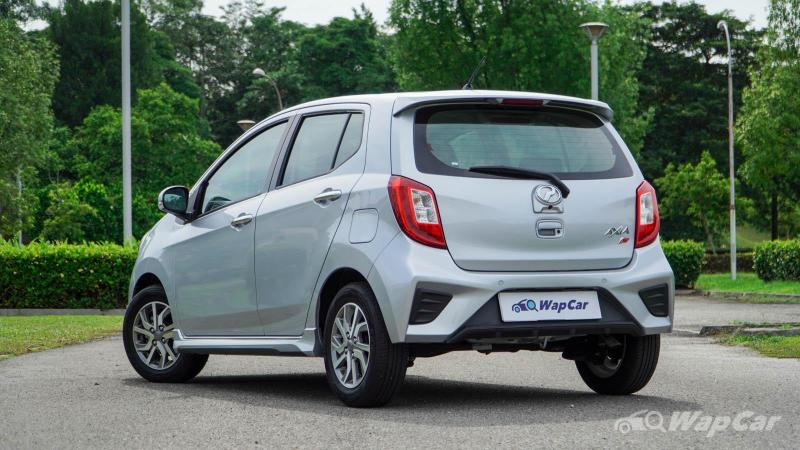 In everything but fuel consumption and costs, the Perodua Axia 1.0 AV is rather average.

In fact, its driving performance could use improvements to enable safer overtaking manoeuvres. Besides that, better sound insulation near the wheel well area would improve cabin comfort.

The price of the Perodua Axia is attractive, but not for all of its variants. We'd suggest you get the GXtra since it at least gets ABS and ESC.

With it reasonably low fuel consumption and small size, the Axia is a decent choice for a city runabout.

Let us know what you think about the Perodua Axia.