Before we start the story, allow us to clarify: No, the Proton Exora and Perodua Aruz are not in the same segment. The Exora is an MPV while the Aruz is an SUV. But the reason we’re comparing both cars together is because they’re similarly priced (the Aruz from RM 72,900, Exora from RM 5...

Two facelift models and one all-new model to launch later this year All-new 2022 Perodua Alza confirmed Are the Axia and Aruz next to be updated?During Perodua’s business review earlier today, the company has confirmed that they are capable of launching 2 facelift models and one brand-new model yearly.Perodua also confirmed that the all-new 2022 Perodua Alza will be coming later this year. Production of the outgoing Alza will be extended to the end of April.Also Read: Bye-bye Perodua Alza

Now open for bookings, the 2021 Perodua Aruz receives a few updates. Prices for the Malaysian SUV remains the same, from RM 68,526 for the 1.5X variant, and RM 73,226 for the range-topping 1.5AV.This update sees Passion Red Metallic introduced for the model, but this is only for the 1.5AV variant. Other than that, both variants now benefit from a new side step and auto-locking doors.No other changes were highlighted otherwise. Performance should stay the same, and GearUp accessory choices remain

The Perodua Aruz has just been launched in Singapore, the first overseas market to receive the 7-seater SUV. The sole variant offered there is the entry-level 1.5 X; the 1.5 AV is not sold in Singapore. The Perodua Aruz is priced at SGD 92,999.Perodua President and Chief Executive Officer Dato’ Zainal Abidin Ahmad said, “The Aruz’s arrival in Singapore marks the first seven-seater offered by Perodua in the island nation.”“With nearly 58,000 units sold in Malaysia si

Rendering onlyFollowing in the footsteps of the Toyota Rush, the Perodua Aruz will also be getting a new red colour option. Toyota RushSources close to the matter shared with WapCar.my that the colour will be named Passion Red, and it will be a metallic shade. It seems that the colour will only be offered on the range-topping AV variant. Expect it to look identical from the Rushs new Red Metallic colour that we talked about last week.The other colours availableThe new colour brings the total num

3.8
Good
Based on 5 Reviews
View More 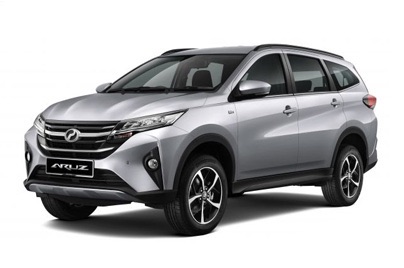