30 years ago, the Honda NSX changed the supercar world forever 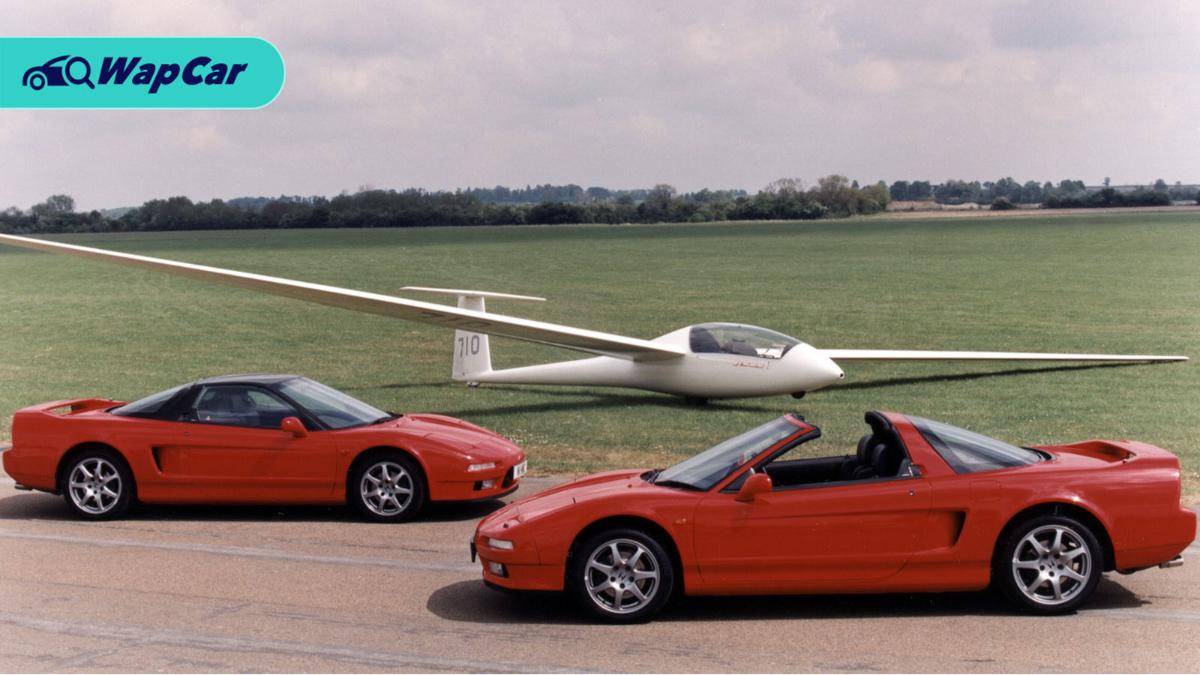 Imagine you’re transported back to the late eighties and you heard news of Honda developing its own supercar. You could be scoffing at the thought of the makers of the humble Civic and Accord jumping onto the supercar bandwagon against the likes of Ferrari and Lamborghini. 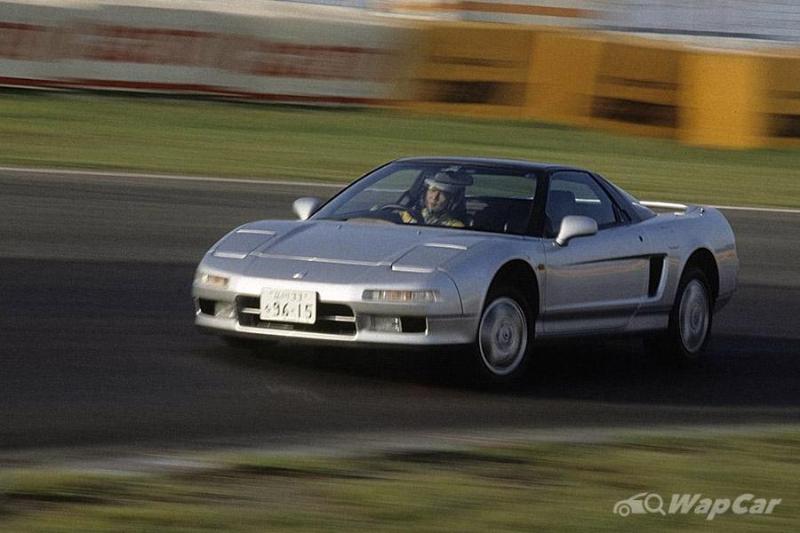 But when the Honda NSX made its debut in 1989 at the Chicago Auto Show (as an Acura) and the Tokyo Motor Show (as a Honda), the international media went into a frenzy. The NSX became an icon, a legend, and a benchmark in the supercar world. It introduced technological innovation, affordability, and reliability into a supercar. 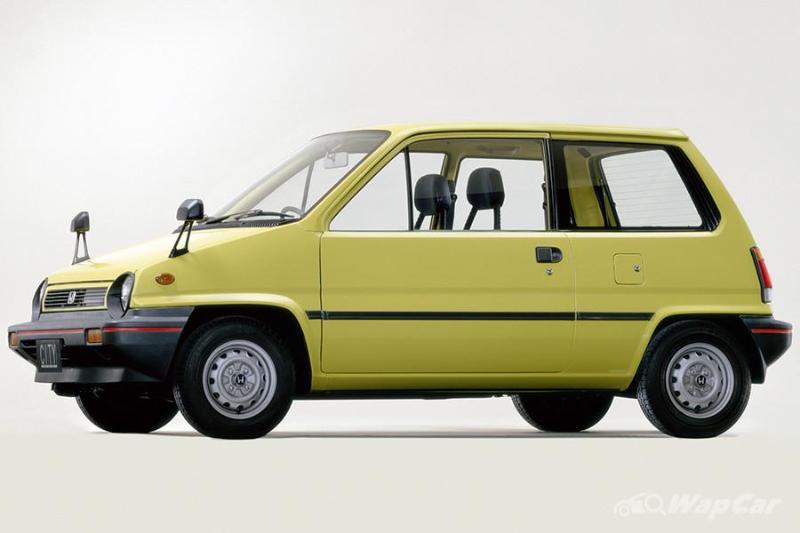 The story of the NSX actually began in 1984 when Michael Jackson’s Thriller was released as a single. Honda’s engineers were testing a half-cut City with a mid-engined, rear-wheel-drive layout around the company’s parking lot to test out the viability of future products. 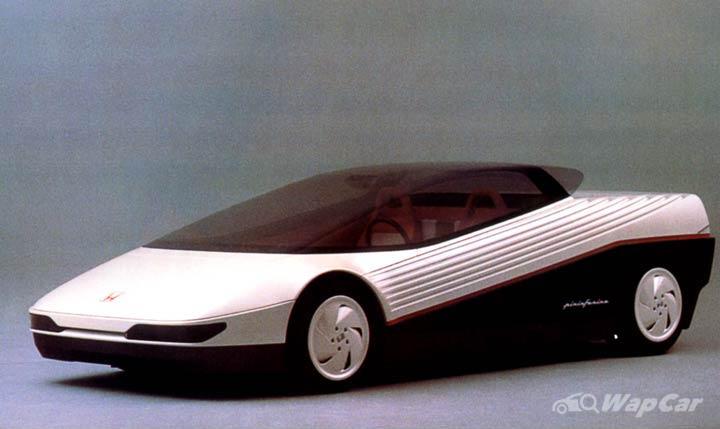 The engineers were convinced that this could be the next big thing and Honda later commissioned Italian styling house, Pininfarina (which was also closely tied to Ferrari, which we'll get back to later) to design the HP-X (Honda Pininfarina eXperimental) concept car. The HP-X was powered by a 2.0-litre CA20A V6 engine, which was one of the first V6 engines produced by Honda. 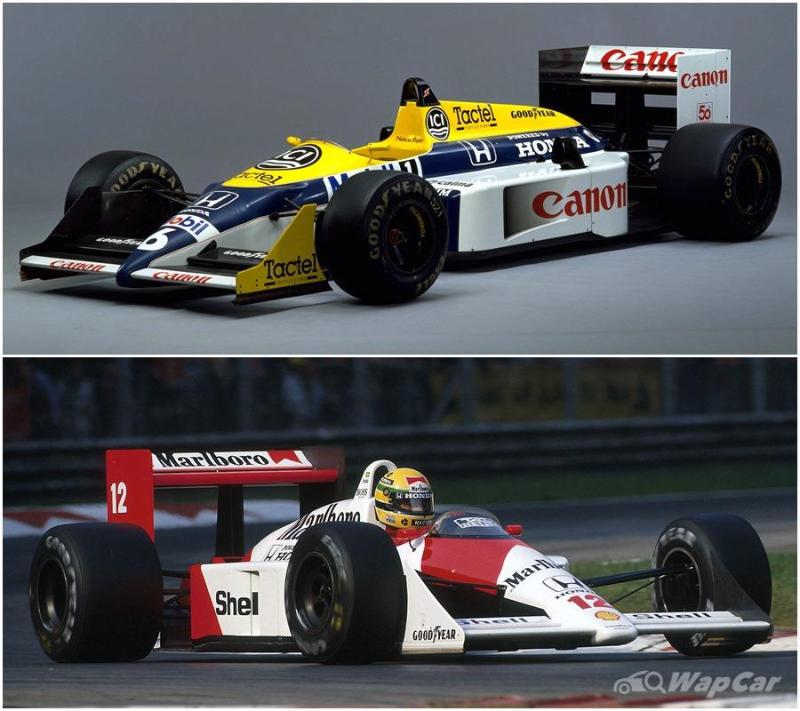 Around this time, Honda had already proven themselves as being almost unbeatable at Formula One. Its engines supplied the successful Williams and McLaren Formula One teams from 1986 to 1991.

Despite its success on and off the track, Honda’s line-up was mostly confined to regular cars. Seeing that the American market was ripe for a new luxury carmaker with better reliability than the Germans, Honda launched the Acura brand in 1986 which turned out to be a success.

Still, Honda was convinced that it needed a supercar for a new generation of buyers that cared about reliability. 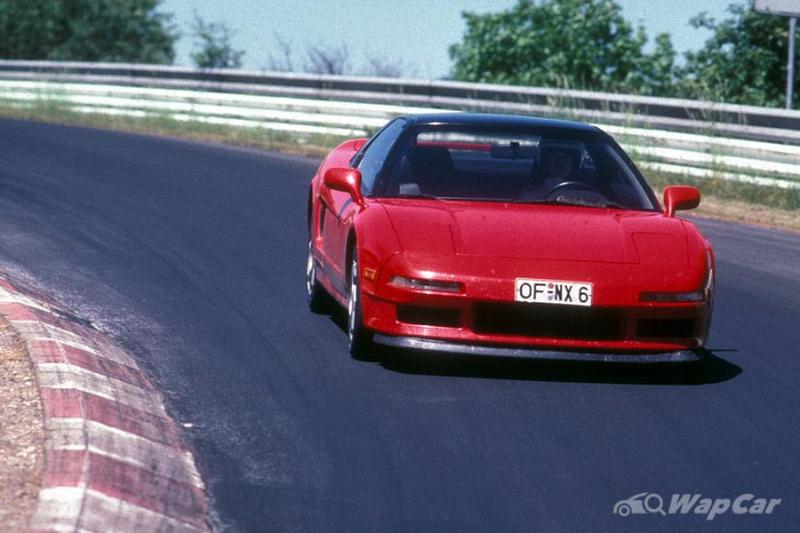 Following the HP-X, Honda decided that it should develop its supercar project from the ground up. This was completely unheard of even in today’s era where partnerships are mostly done to build something as niche and costly as a supercar. But remember, this was 1980s Japan, one of the richest countries in the world at the time.

Honda gathered a group of its best engineers and designers which included Nobuhiko Kawamoto who was involved in Honda’s first F1 project in the 1960s and was the head of Honda’s R&D, Shigeru Uehara who was later in charge of the S2000 project, Ken Okuyama who later designed the Enzo Ferrari and Masahito Nakano who was Honda’s Chief Designer at the time. 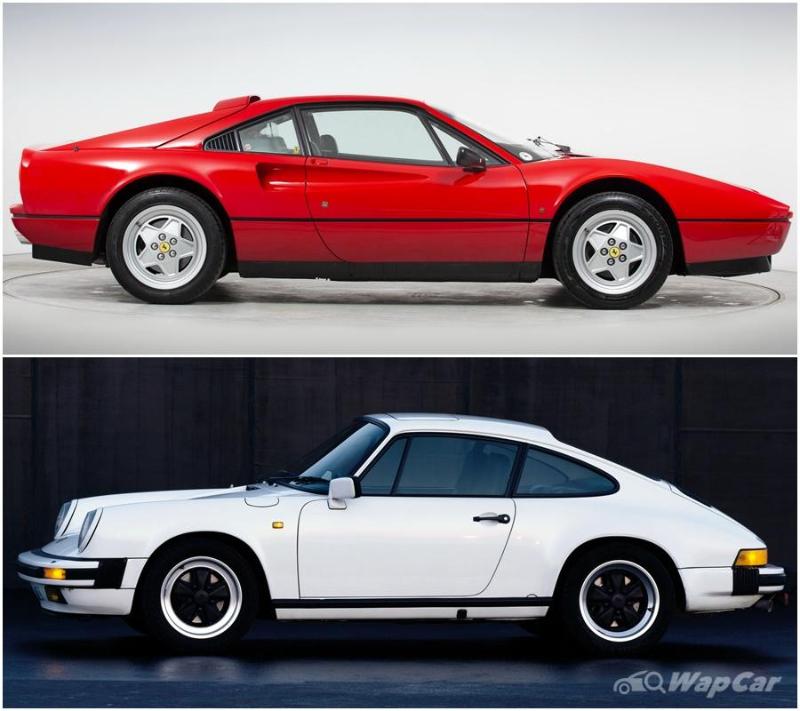 The original benchmark for Honda’s supercar was the Ferrari 328 and the Porsche 911. Honda intended its supercar to meet or exceed the performance of a Ferrari while at the same time offering better reliability and a cheaper price. The original 2.0-litre V6 in the HP-X was scrapped in favour of a more powerful 3.0-litre C30A VTEC V6. The name was also changed to NSX which stood for New Sports eXperimental. 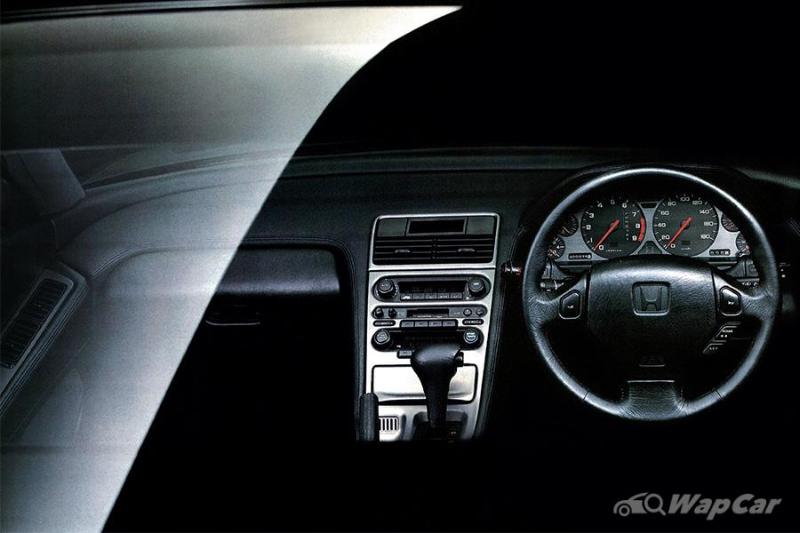 The design of the NSX itself was revolutionary on its own. It offered better visibility than any supercar at the time, making the NSX a true everyman’s supercar. Uehara the designer was inspired by the F-16 fighter jet’s cockpit and opted for a cab-forward design which was a trend in the late-eighties to give optimum visibility.

An F1 car for the streets 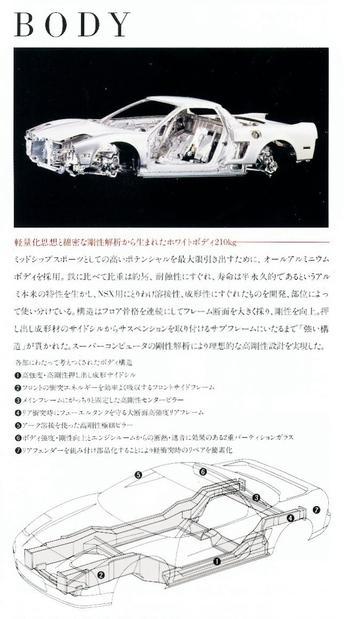 With Honda’s successes in Formula 1, the NSX was a way for Honda to showcase some innovative technologies taken from that program. It was the first production car to feature an all-aluminium semi-monocoque structure. The use of aluminium helped to save nearly 200 kg of weight over the use of steel and the car weighed only 1,350 kg. 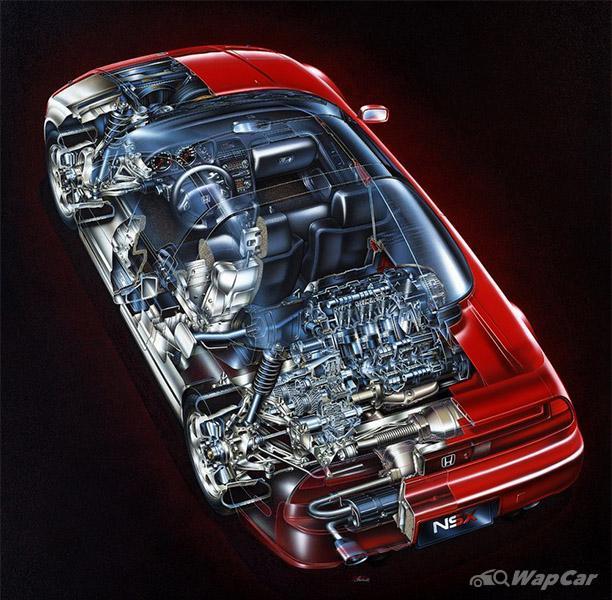 The NSX also came with an independent, 4-channel ABS system, electric power steering and from 1995, electronic throttle control. Because of its involvement with Formula 1 and other motorsports divisions, the NSX was developed with the help of professional racing drivers, most notably the late, great Ayrton Senna. 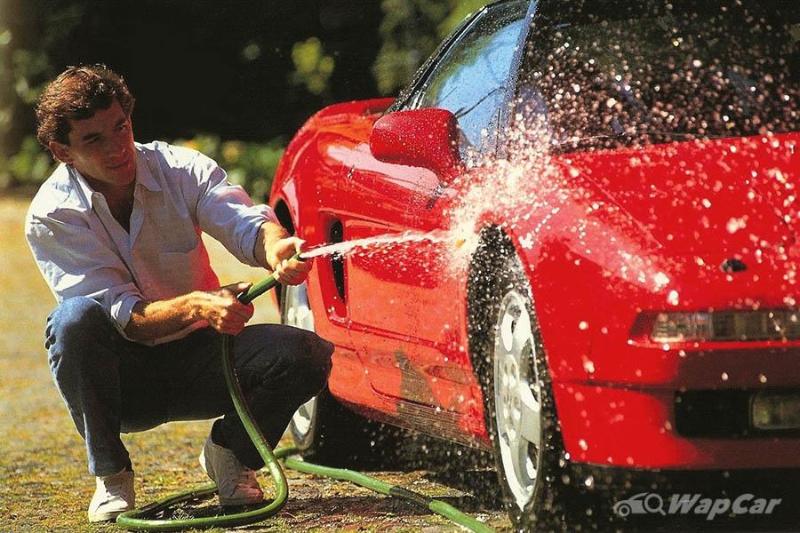 Senna was considered as the main innovator in convincing the NSX to have a stiffer chassis and to help refine the supercar’s suspension tuning and handling. Senna being the committed hard-working driver he was, would spend a whole day driving prototypes and reported his findings to the engineers. He would even take one of the prototypes to Nurburgring to fine-tune the chassis stiffness. 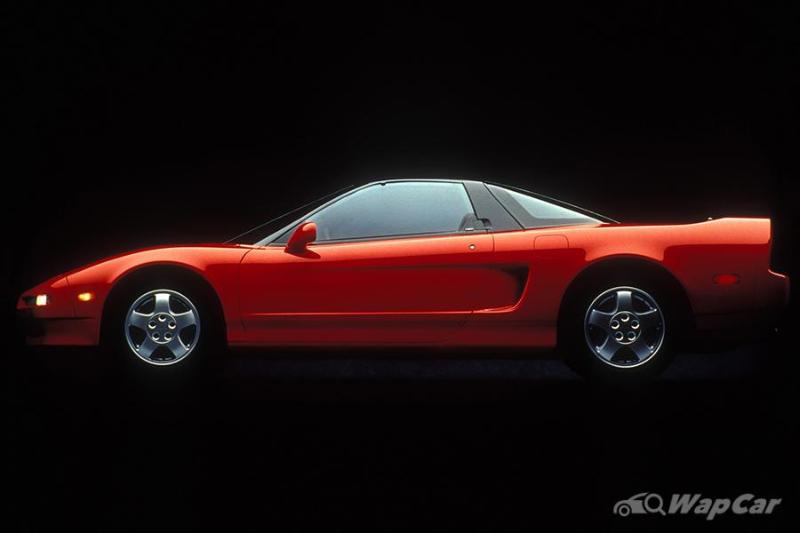 The Honda NSX was first shown publicly at the Chicago Motor Show in 1989 but sales would only commence in August 1990 in Japan. Apart from Hong Kong and North America where it became an Acura, the NSX was sold as a Honda.

In Japan, the NSX was sold through Honda Verno dealers which specialised in performance Honda models which included the Prelude. The NSX was Honda's flagship car. 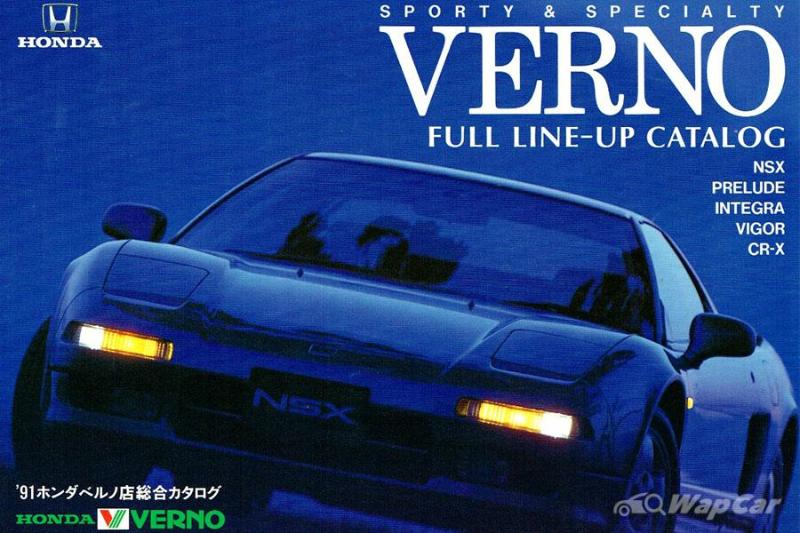 The NSX was available with either a 5-speed manual transmission or a 4-speed automatic. In the manual, the rev counter redlined at 8,300 rpm with the 3.0-litre VTEC V6 providing just enough grunt at 280 PS and 294 Nm. 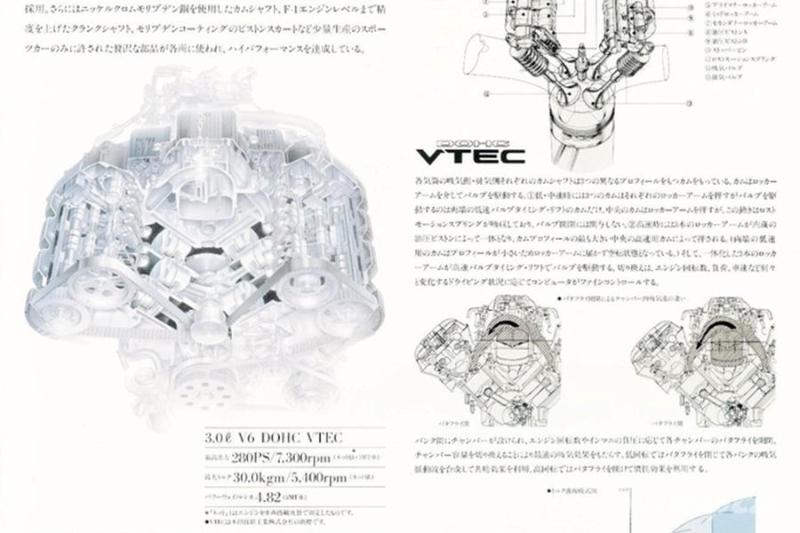 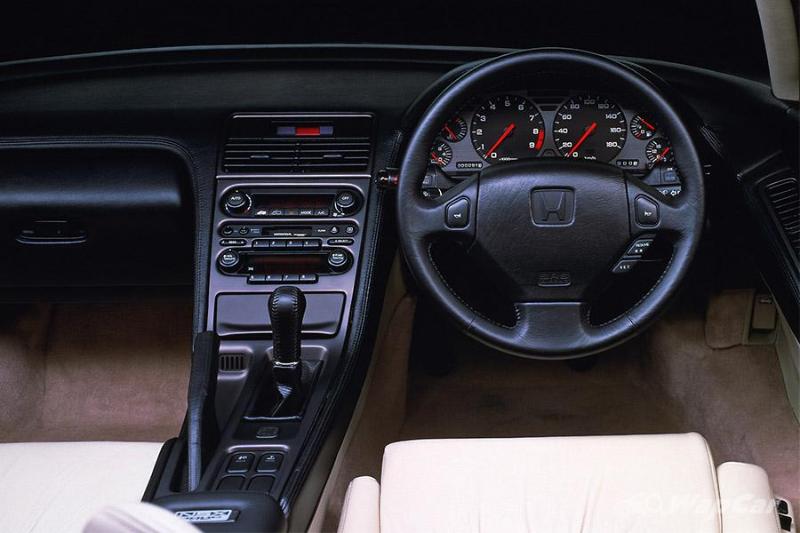 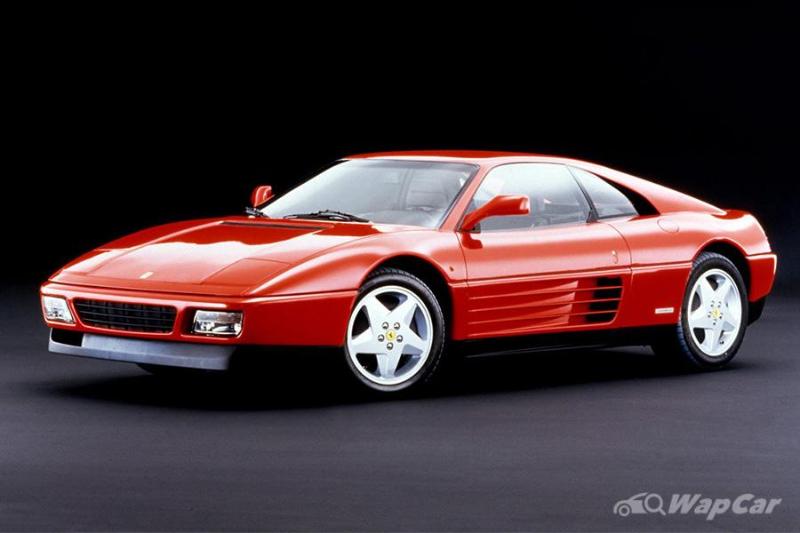 But what made the NSX truly legendary was how it not only became a budget supercar, it even bested them at their own game. While the NSX was initially developed to beat the 328, when it was launched, Ferrari introduced its replacement, the 348.

The Ferrari 348 as it turned out, was deeply flawed. Reviewers noted that the Ferrari was just exotic to look at but felt older than the futuristic NSX. In a 5-way test in 1990 that included the 348 and NSX, Car and Driver ranked the NSX at number 1, while the 348 got 4th place. 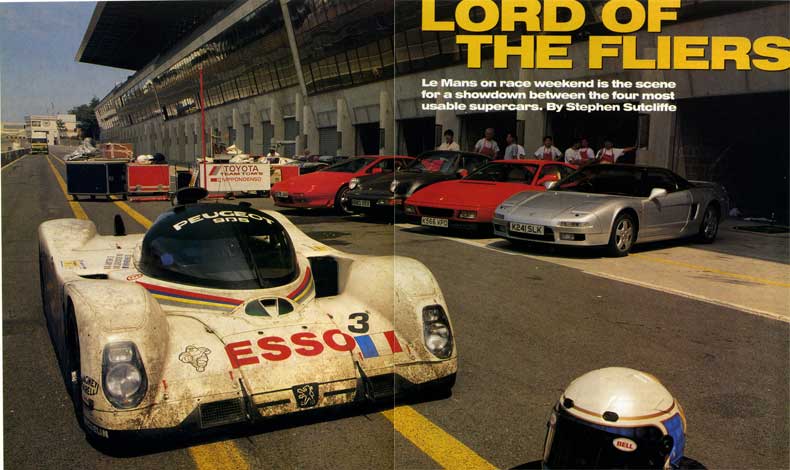 UK’s Autocar in 1993 also thought the NSX was better as an all-rounder but the 348 could get more stares. Even Wheels Australia admired the NSX and called it “by almost any rational measure, is the best, most perfect (car)”.

The R in NSX-R stands for raw, racing renegade 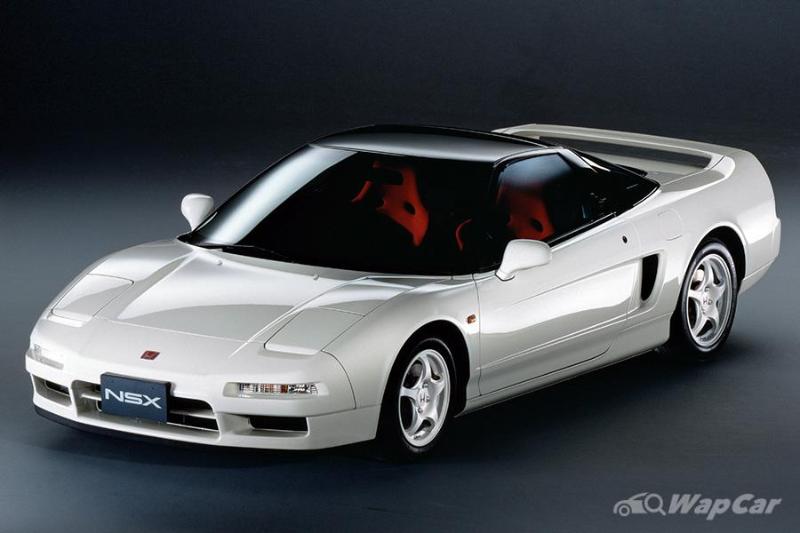 If the original NSX already set out a benchmark for what a perfect supercar could be, then the NSX-R would be the ultimate expression of speed. When Honda launched the Type R, it was all about showing off the superior lightweight performance of its cars. The NSX was the first model to have the coveted red 'R' badge. 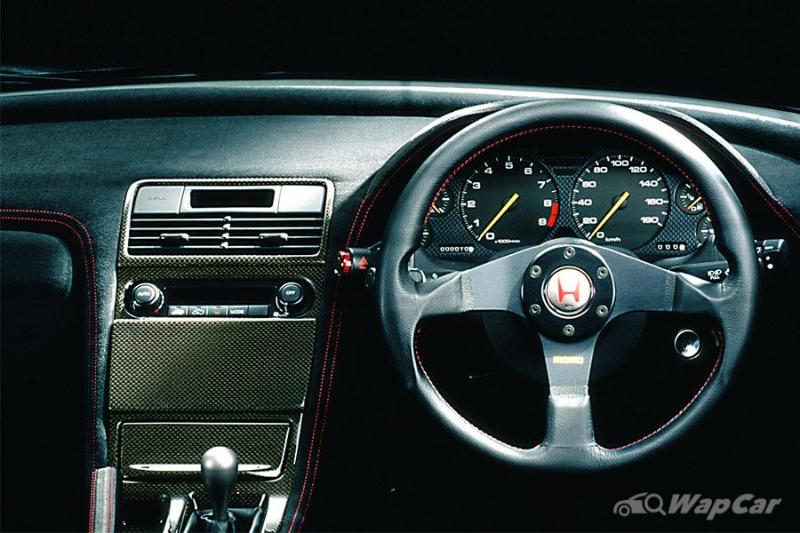 So, the NSX-R had an extensive diet which included the removal of the sound deadening, the audio system, spare tire, air conditioning system, traction control, and some electrical equipment. The power leather seats were also replaced with Recaro racing seats made out of lightweight carbon-kevlar materials. Lightweight forged Enkei aluminium wheels were also standard on the NSX-R. 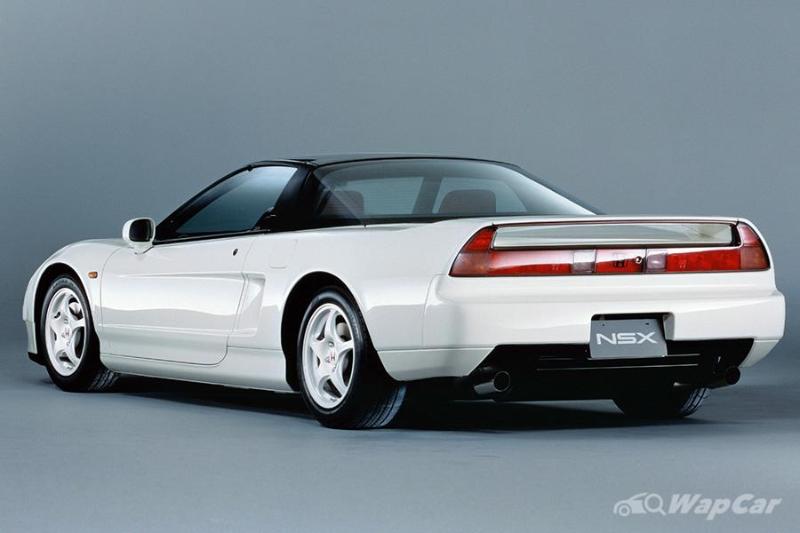 All of this reduced the weight of the car by 120 kg. The NSX-R was launched at the end of 1992 and ended in 1995. A total of 483 units of the NSX-R were built, exclusively for the Japanese domestic market (JDM) in Championship White. 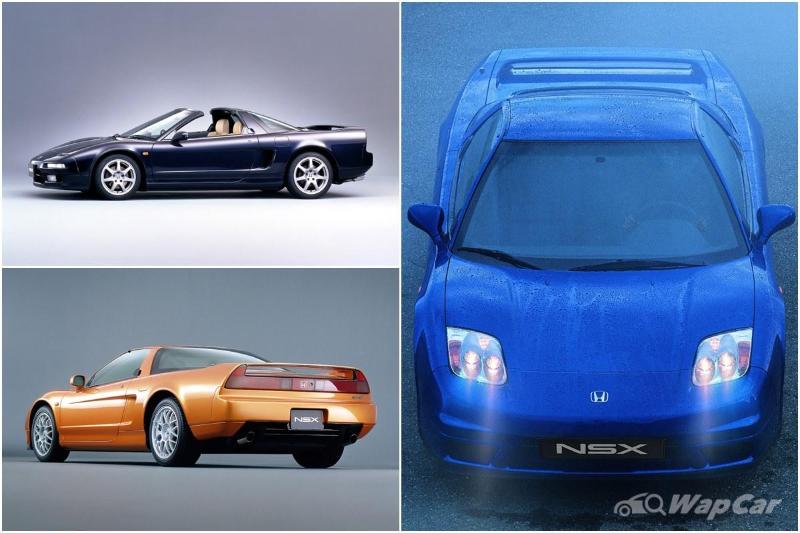 Throughout its 15 years of production, the NSX had added a targa-top variant known as the NSX-T, a Type-S variant with the 3.2-litre V6, and got a facelift by replacing the pop-up headlights for fixed ones, which felt like a step back in terms of design. 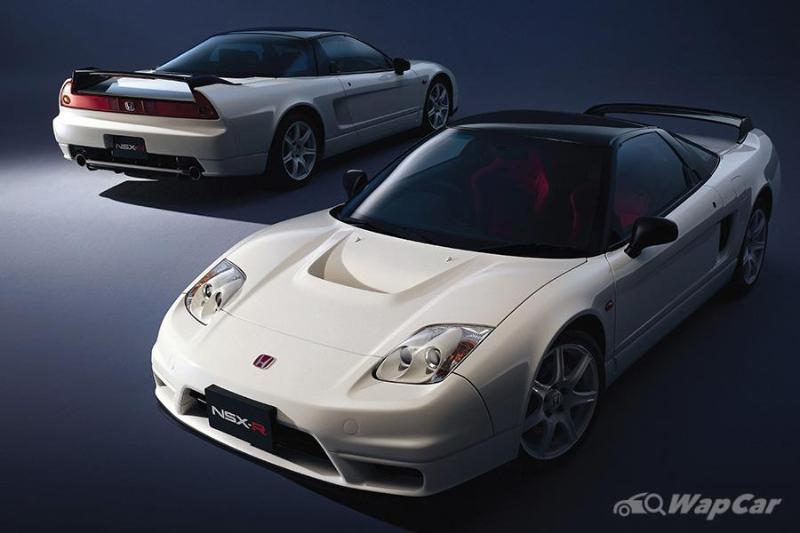 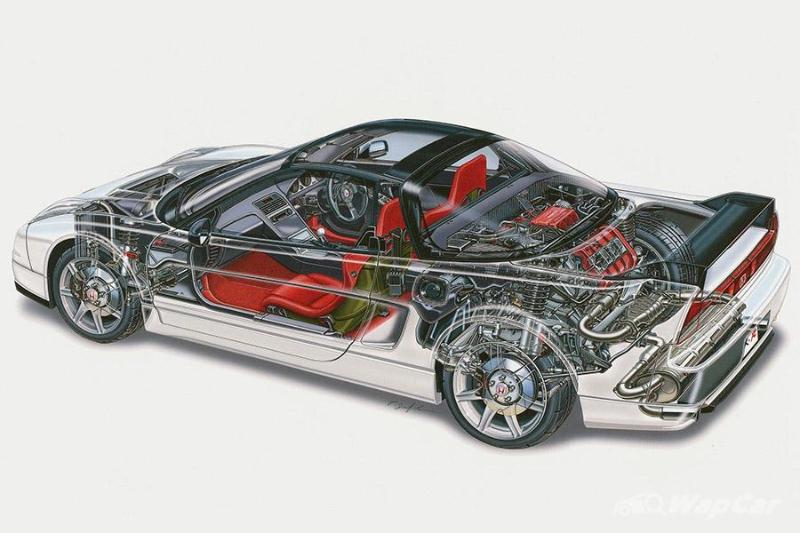 This gave the total weight of the second-gen NSX-R to only 1,270 kg. The power output of the 3.2-litre V6 remained at 294 PS. At this point, the NSX was 15 years old but age is nothing but a number here as Japanese race driver, Motoharu Kurosawa took the second-gen NSX-R around the Nurburgring in 7:56 – equalling the Ferrari 360 Challenge Stradale. 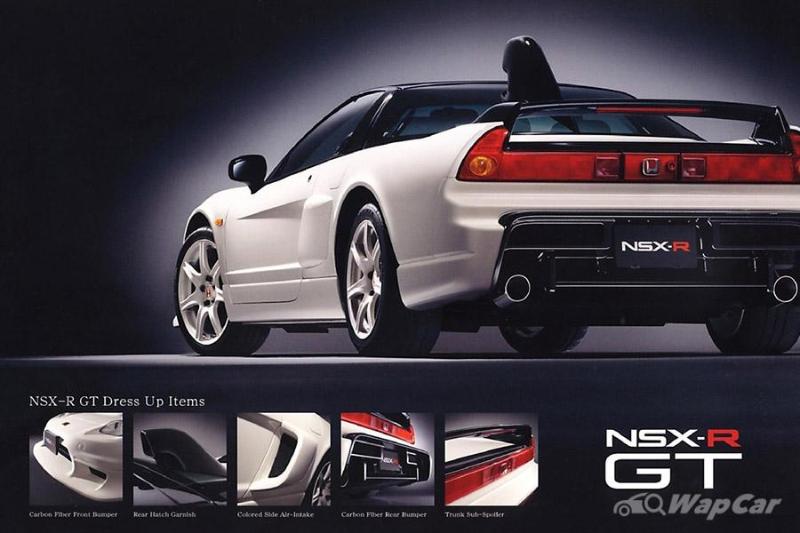 Production of the NSX ended on 30-November 2005 but it continued on in motorsports, in particular the Japanese Super GT where the NSX-GT was used until 2009. Between 1997 and 2009, the NSX-GT won 36 races, 45 pole positions, 3 constructors’ and 2 drivers’ championship, making it one of the most successful race cars of the series.

As for the successor, it took Honda 11 years and numerous concept cars before the second-generation finally arrived in 2016 but that’s a story for another time. 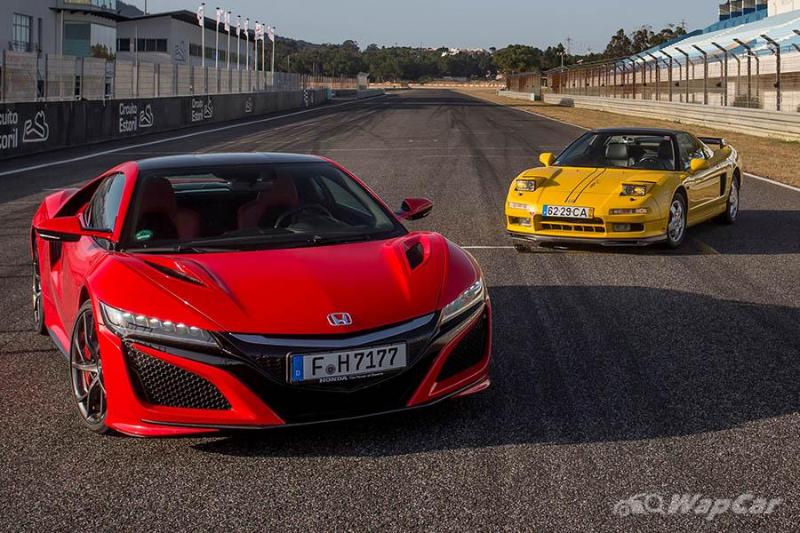 The Honda NSX is truly one of the all-time legends and its technological advancements still make it pretty commendable by today’s standards. It shook the automotive world off-balance, combining both the speed of a supercar and the everyday reliability of a regular car – something very few manufacturers are able to do even today.