Just RM 10k difference between Proton X50 and X70, which is a better buy? 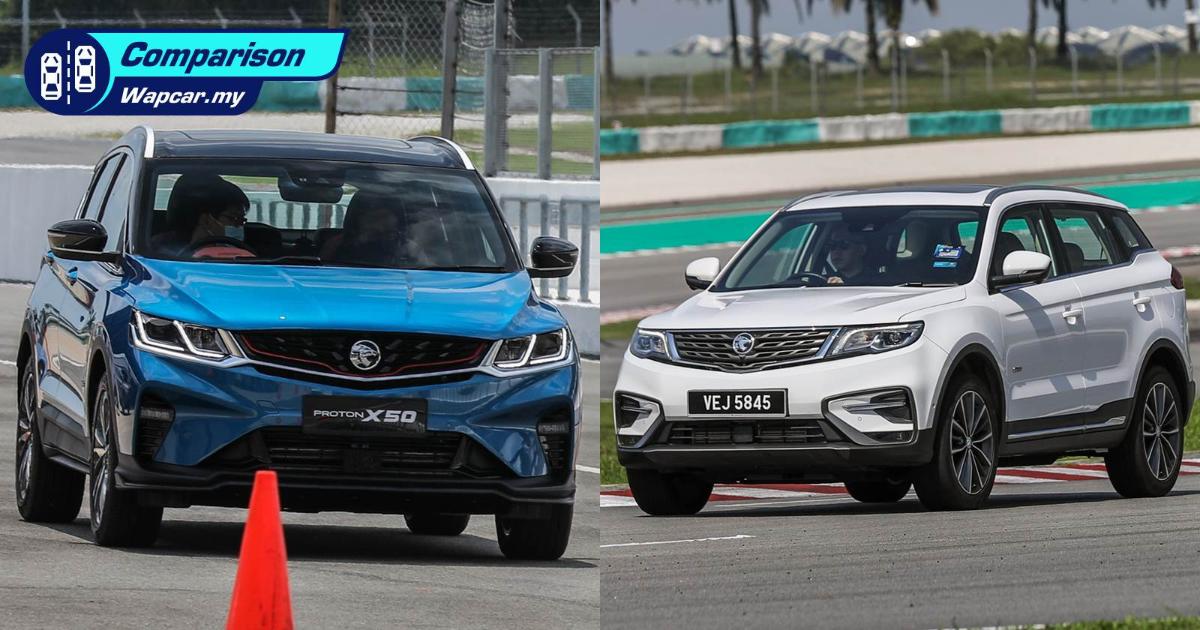 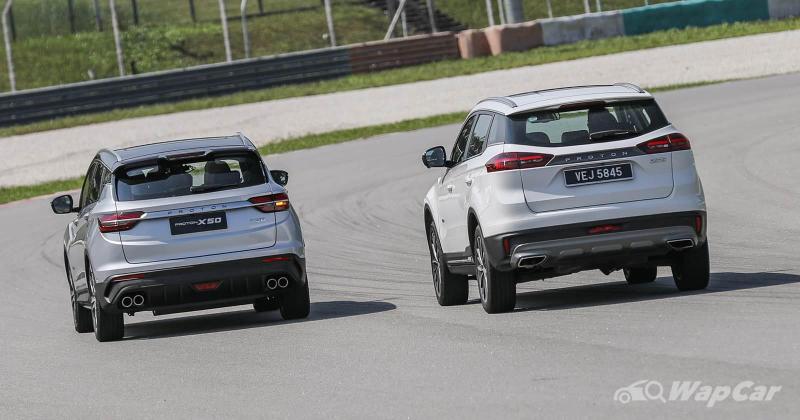 Put aside for a moment semantics that both the X50 and X70 are from different segments. At the end of the day, both cars do more or less the same thing, have five seats, are similarly equipped, and are priced almost the same – the latter is what matter most to consumers. 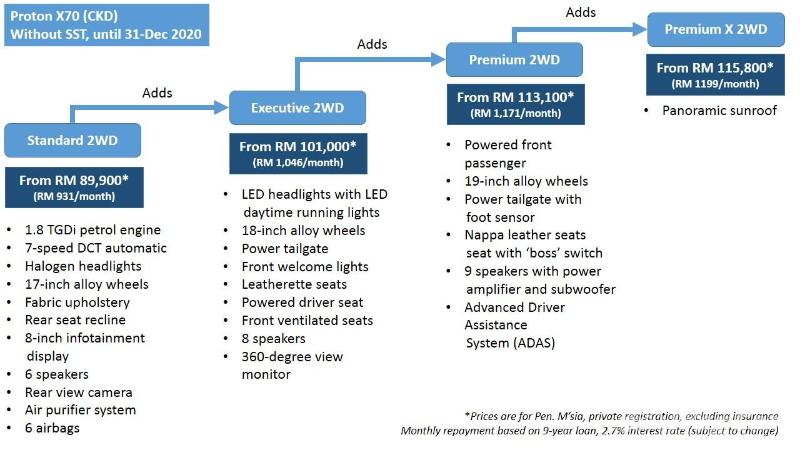 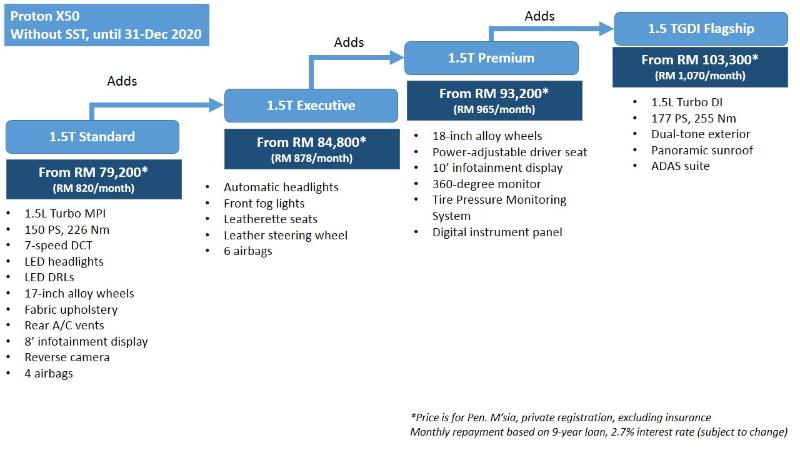 In other words, not only is the price gap between the two models small, but some variants overlap each other as well. 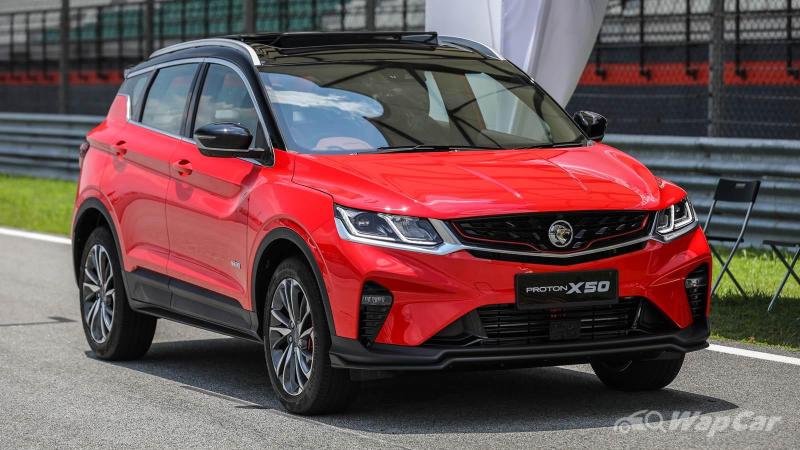 There are of course differences in engine, interior space, as well as the corresponding trade-off between a bigger, heavier car and poorer fuel consumption as well as ease of parking, so these will be the deciding factor.

Even by the standards of a B-segment SUV, the X50’s 330-litre boot is still too small, especially when compared to the Honda HR-V’s 437-litre boot. Hybrid variants of the HR-V fit 404 litres, on account of having to accommodate the additional high voltage battery. 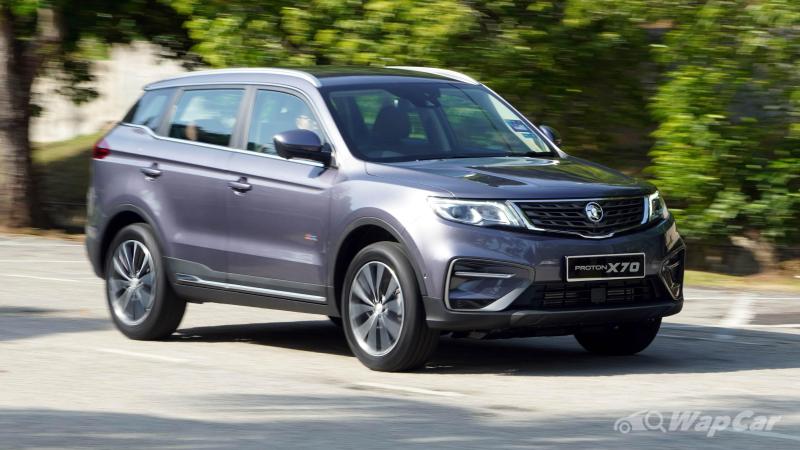 Between the Proton X70 and the Proton X50, it is the latter that is better car to drive, at least based on our brief driving impressions. 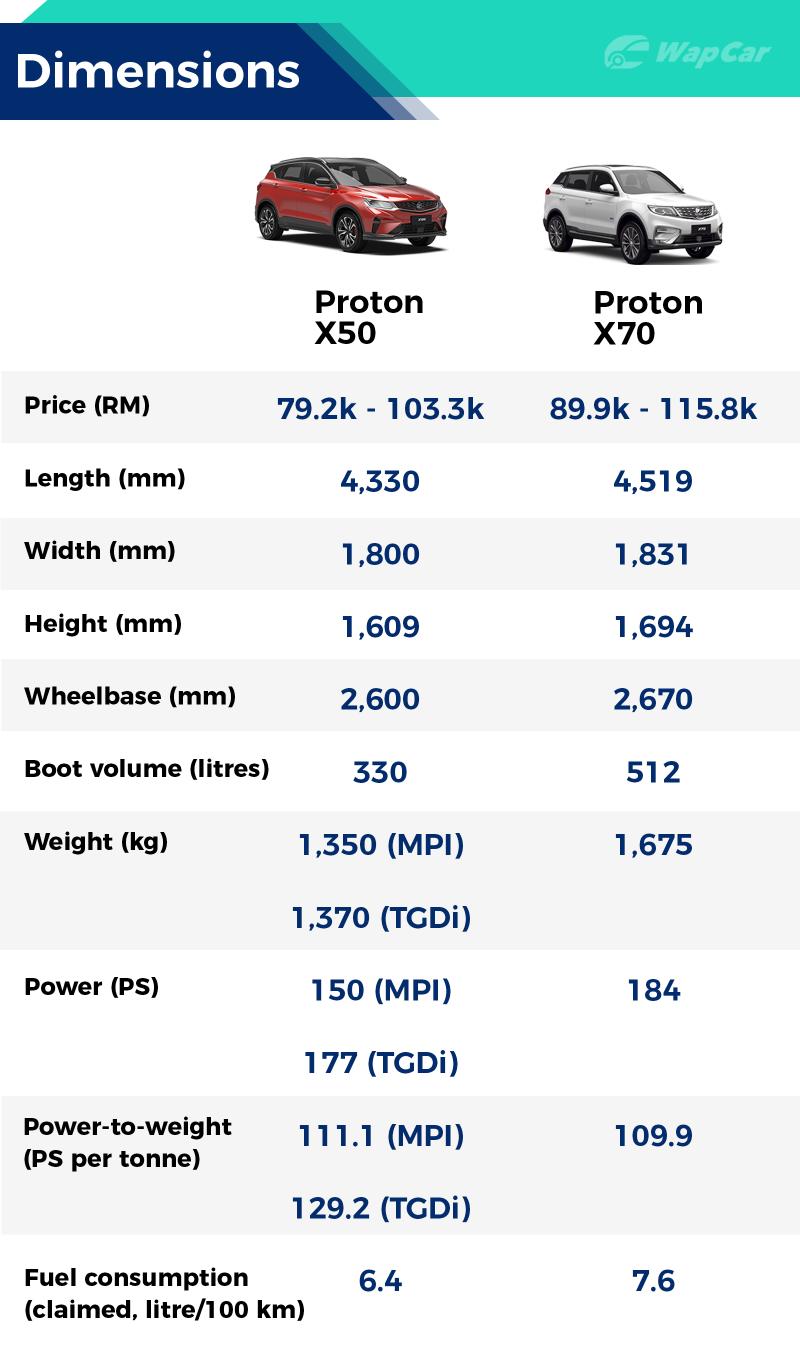 The X50 is smaller, feels lighter on its feet, and is not as cumbersome as the nearly 1.7 ton X70. The X50 is also more agile, and is nearly as comfortable as the X70. Of course, the X70, being a higher range car, is of course quieter and rides in a suppler manner.

We have not yet had the chance to put the X50 through our comprehensive assessment yet, but initial impressions are very good.

Prices for the X50 start from RM 79,200, for the 1.5T Standard variant but this is only a crowd pulling base variant as it has just 4 airbags, because for just RM 5,000 more, you can get a better equipped 1.5T Executive variant, with 6 airbags and leather seats – this should be the cheapest X50 variant you should settle for. 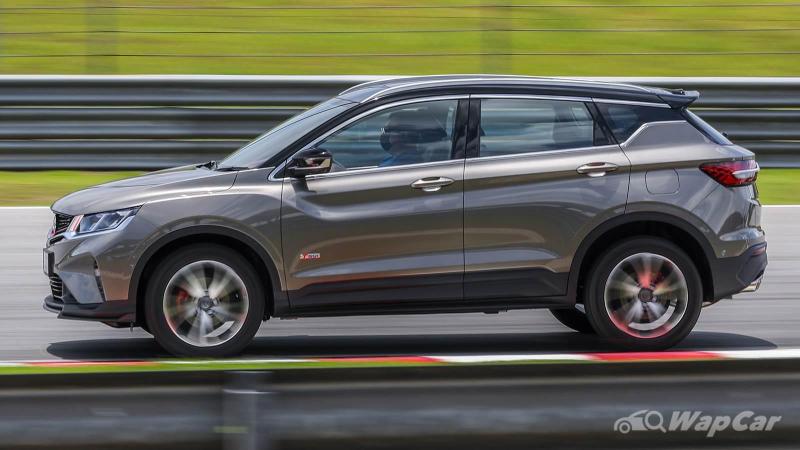 But if you start thinking further, paying another RM 5,000 more will get you a bigger X70 Standard. If you are not convinced with the X50’s three-cylinder engine, the X70 offers a more conventional 4-cylinder unit, both paired to the same 7-speed dual-clutch automatic transmission. 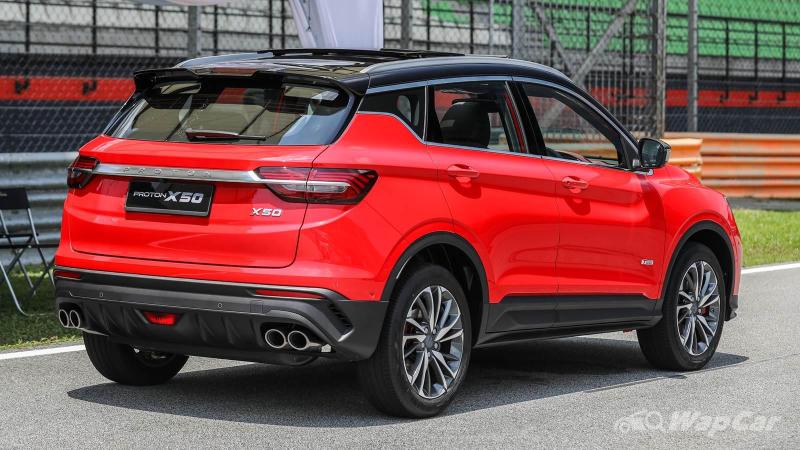 Neither omissions on either cars are deal breakers though, so it’s a question whether you prefer better fuel economy, ease of parking and better handling versus having more cabin space and slightly better comfort.

However once you move to the upper two variants of the X70, the balance tilts in favour of the X50.

If you are buying the highest specifications variant, you will naturally expect the car to have everything there is on offer, and this is where the X70 falls short. 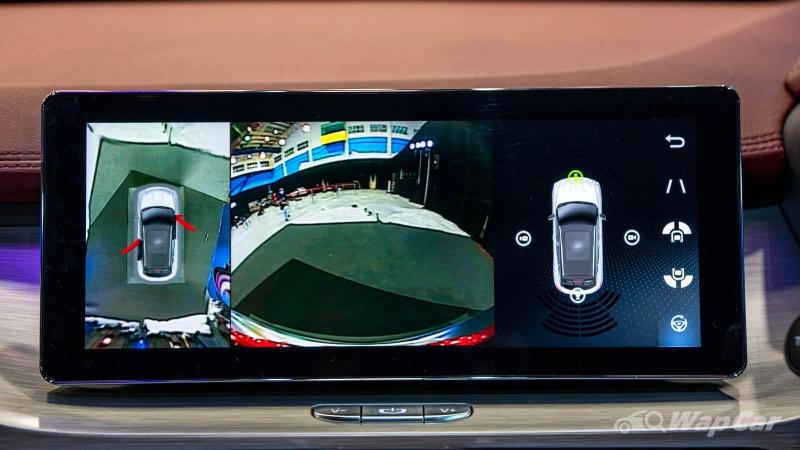 Both the X50 Premium and Flagship variants have a bigger 10.25-inch touch screen infotainment, versus the X70’s smaller 8-inch unit. Remember that the X70 is a bigger car, but has a smaller screen.

Once your eyes are tuned to the differences, it’s very hard to unsee the shortcomings in the X70’s infotainment screen.

The only consolation here is that the X70 has a more sophisticated 9-speaker setup, with a sub-woofer, plus it also has Nappa leather seats.

But what really tips the scale to the X50’s favour is its more advanced suite of advanced driving assistance (ADAS) features.

The X50’s adaptive cruise control now adds Stop&Go function, which means that the car is able to come to a complete stop, and accelerate away once traffic gets moving again – this is not available in the X70. 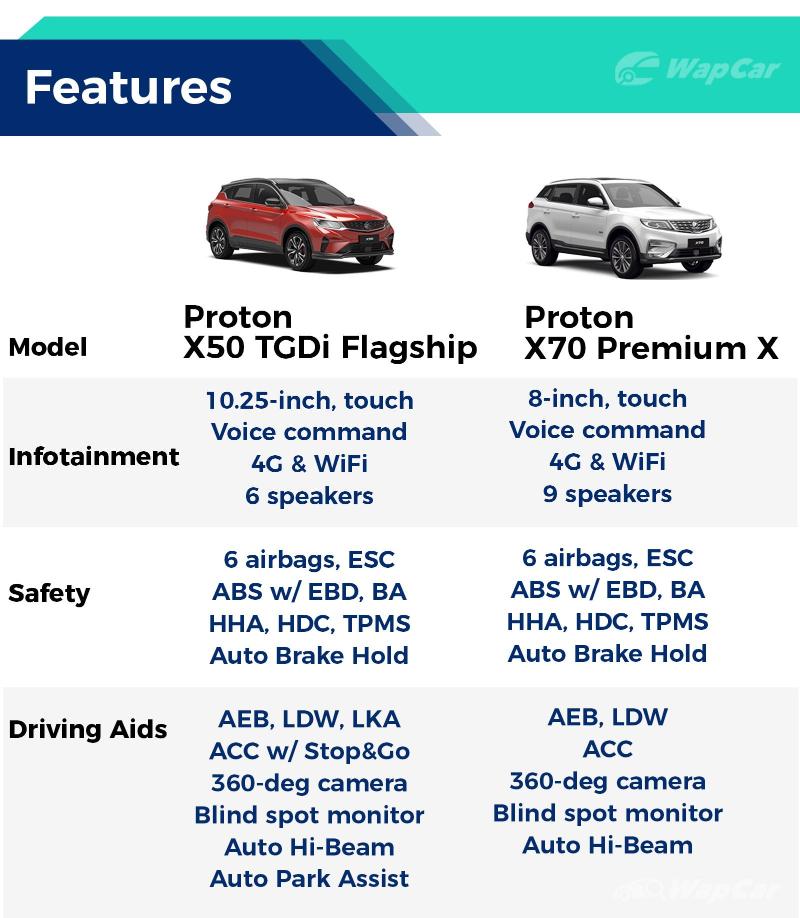 The steering assistance now adds Lane Keeping Assist, while the X70 is only able to give audible alerts.

Lastly, Auto Park Assist, which is capable of semi-automatic parallel and perpendicular parking. The driver is still in control of braking and acceleration, as well as shifting between Reverse and Drive, but steering action is done automatically.

All these new features are not available in the X70. If you are a gadget person, the RM 10k cheaper X50 TGDi Flagship is a better bargain than the X70 Premium and Premium X. 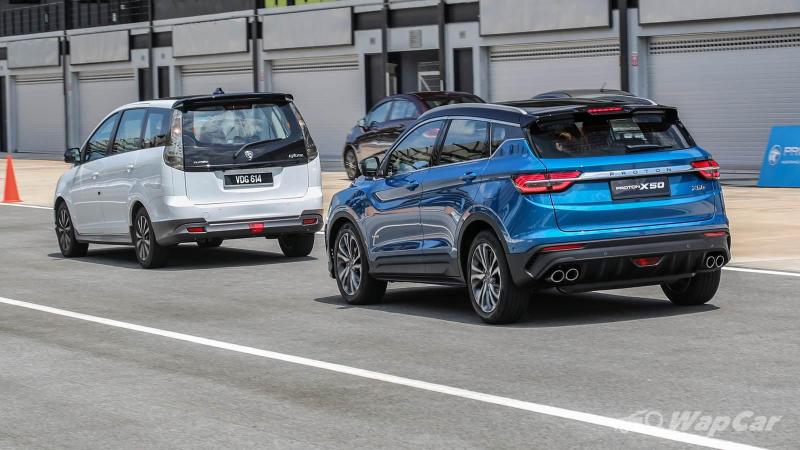 The X50’s 18-inch wheels are also cheaper to replace than the X70 Premium and Premium X’s 19-inch ones, which is one size bigger than necessary. It’s better to spend money on smaller, but higher quality and safer tyres instead of bigger but mediocre ones, just for the sake of aesthetics. 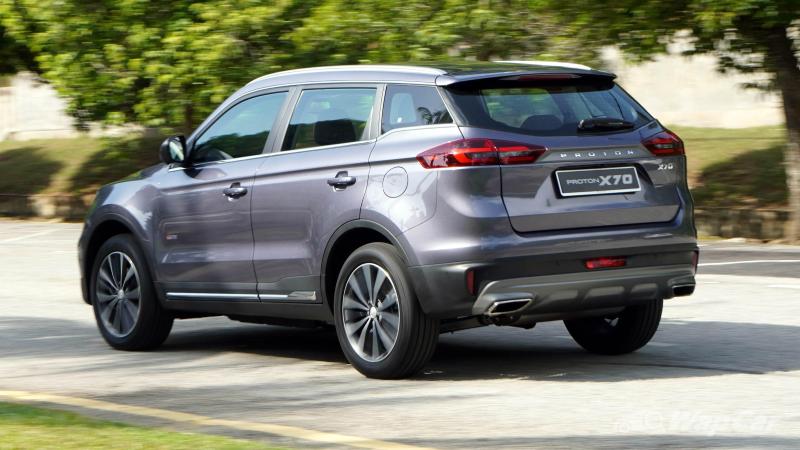 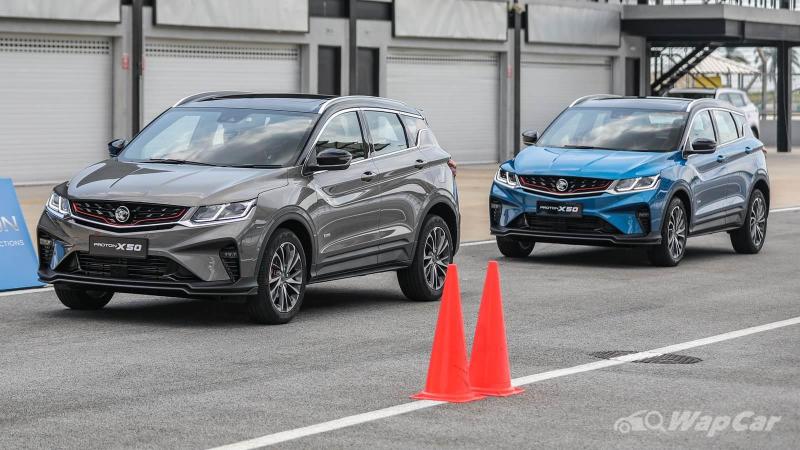 So which is your preferred choice? Let us know in the comments below.