Home > News > Review: Proton X70 Premium X - Is there a better SUV for the money?

Review: Proton X70 Premium X - Is there a better SUV for the money? 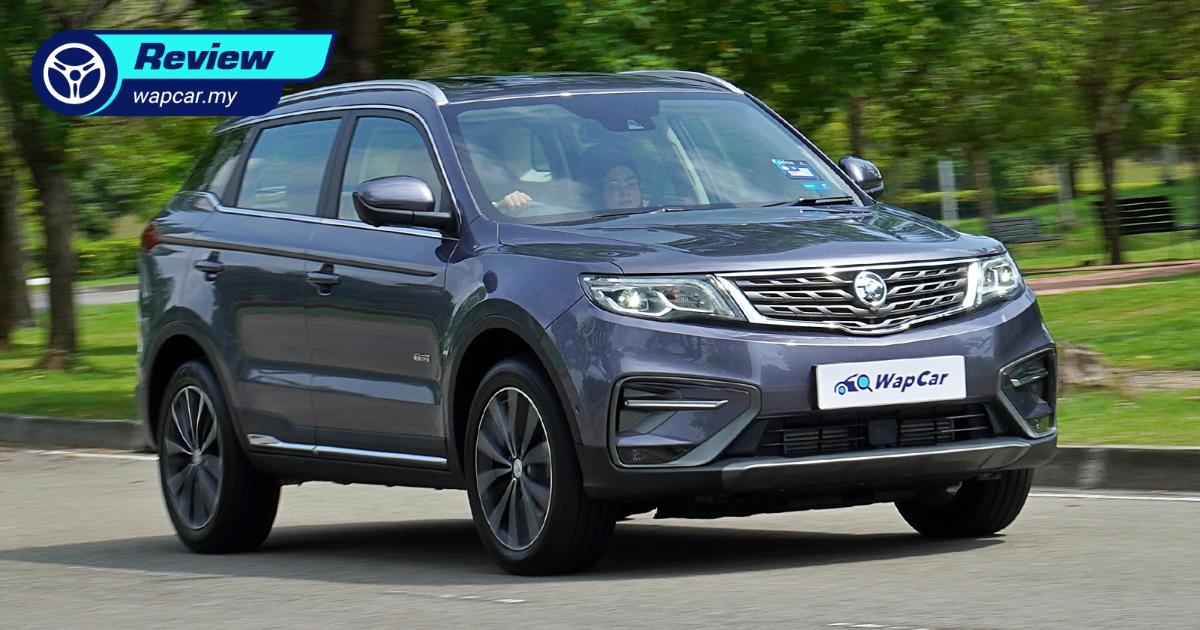 Most Malaysians are no strangers to the Proton X70. There’s a reasonable number of Proton X70s on the road and with good reasons, of which we’ll dive into a little later. 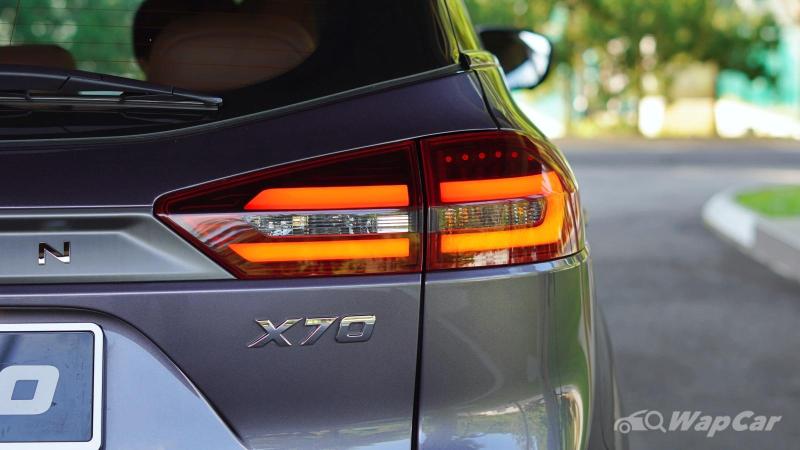 Let’s begin with a recap of the Proton X70. The locally-assembled (CKD) Proton X70 was introduced early last year in 2020 with a host of updates such as powered tailgate, ventilated seats, new transmission, etc. Prices have gone down across the board as well compared to the fully-imported (CBU) versions. 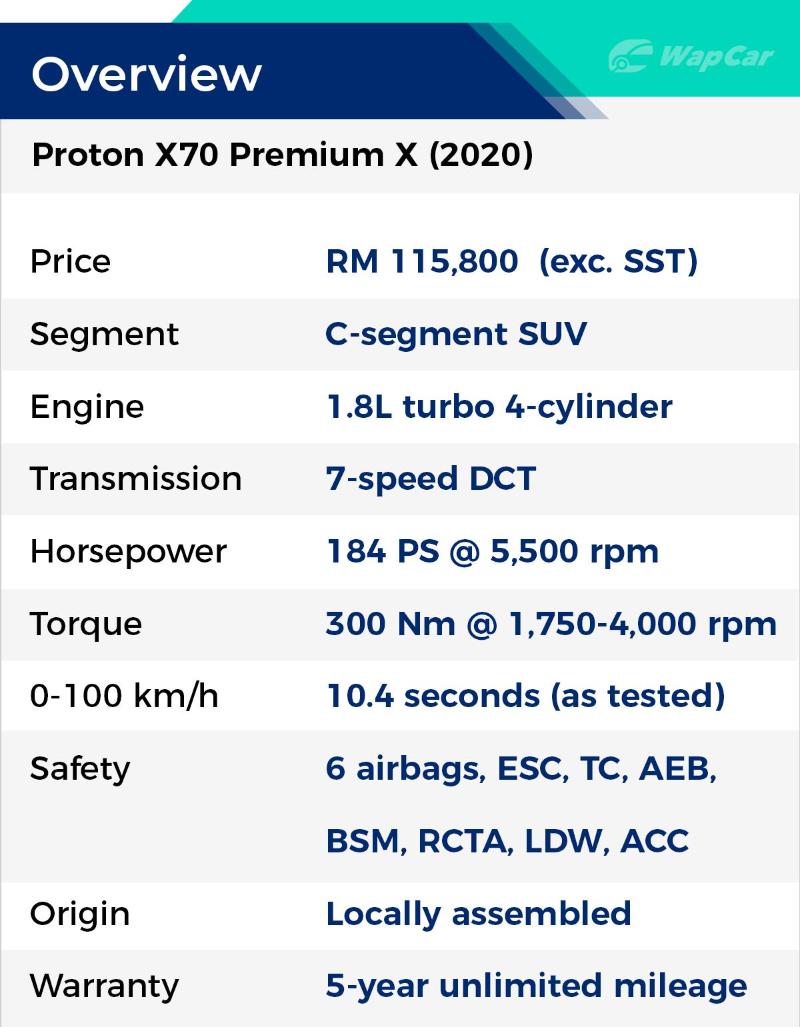 Since the Proton X50 has taken some of the limelight – with some variants overlapping one another in terms of price – is the Proton X70 still relevant to Malaysian buyers? Let’s find out. 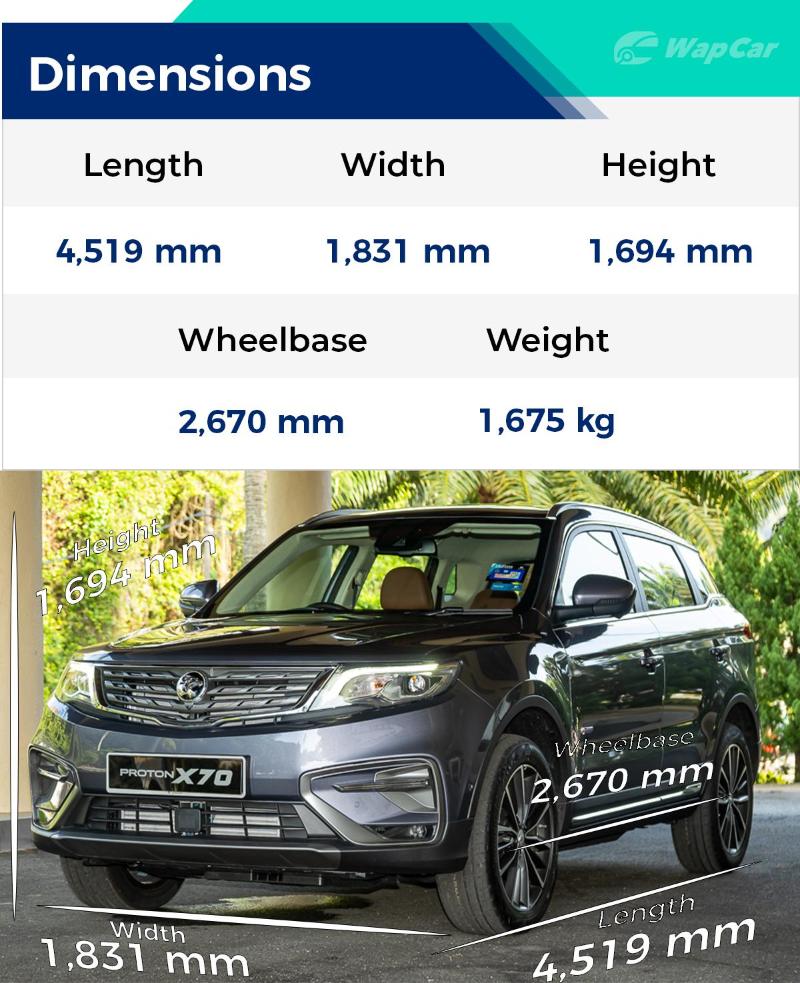 Where the Proton X50 looks sharper, sportier, and all the adjectives you would associate with being youthful, the Proton X70 is pretty much the opposite – mature and elegant. Personally, I would describe the Proton X70 as handsome. 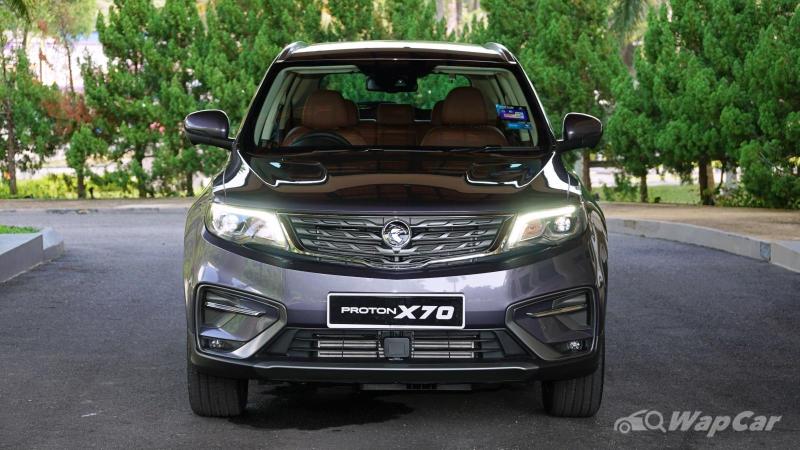 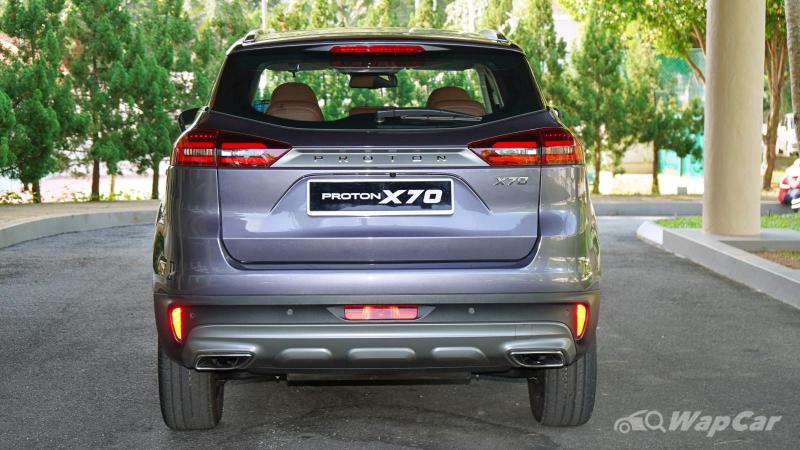 The range-topping Premium variants wear 19-inch wheels, which I think looks just right for the Proton X70. Although the lower rung variants with smaller wheels do improve the ride quality by a tad and reduces tyre replacement costs. 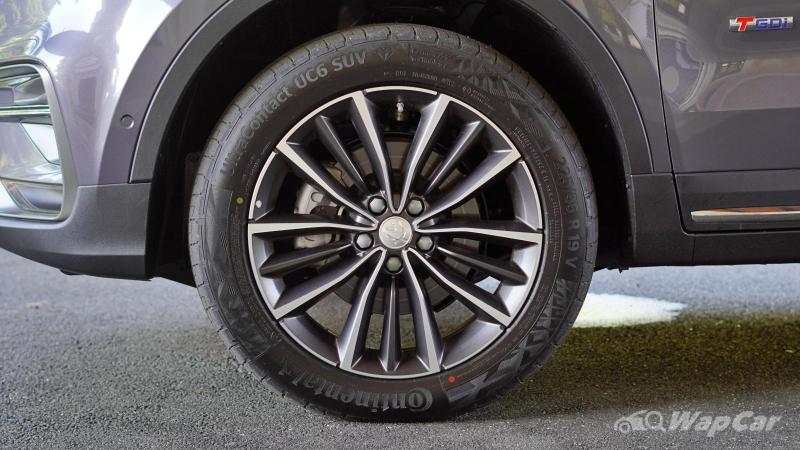 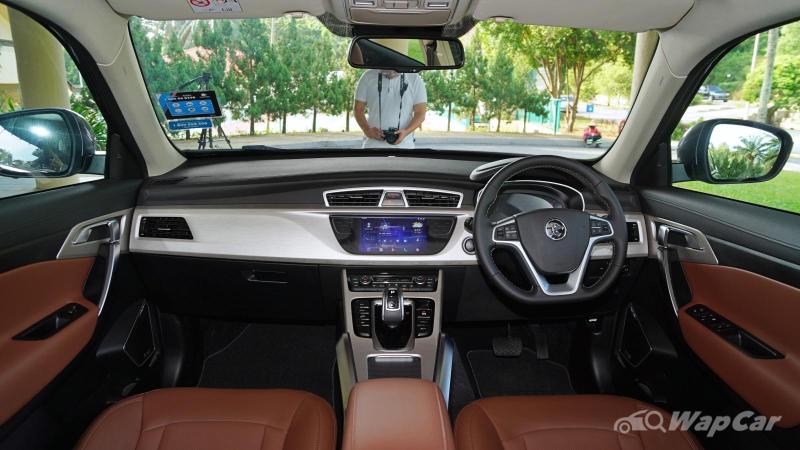 When the Proton X70 first came out a little over 2 years ago, I was rather impressed with its build and material quality. The fact that the Proton X70 is now locally assembled has not changed my impression of it. 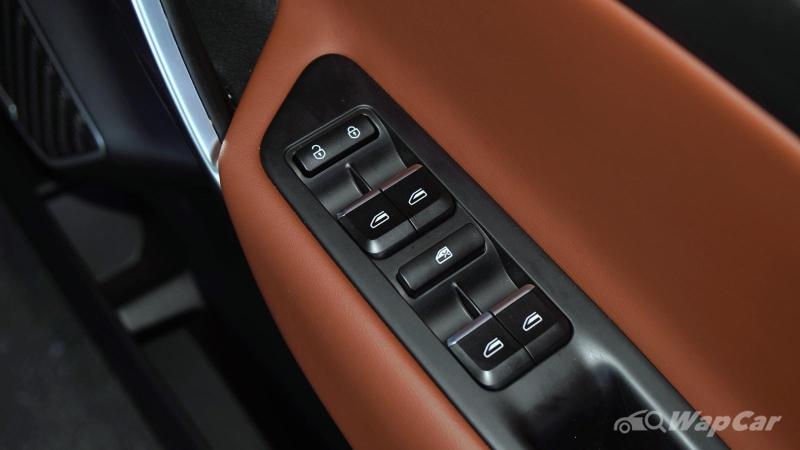 There are nice and squidgy soft plastics on the top section of the cabin, supple Nappa leather seats, trim pieces that feel cool to the touch, and sturdy handles on the centre console. At this price point, nothing else comes close to it in build and material quality. Not even the Proton X50. 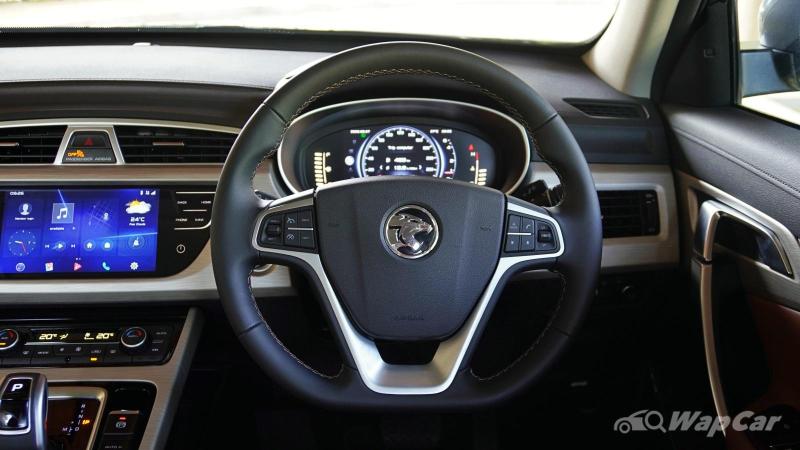 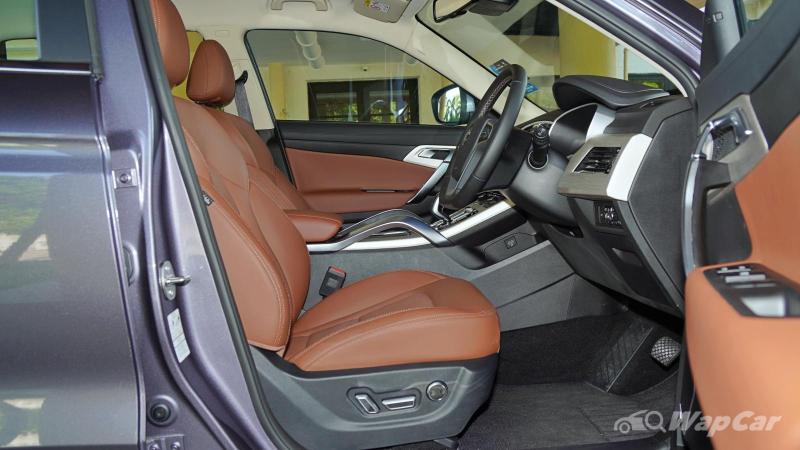 Also, the sport button only changes the throttle and transmission mapping, while steering is unaffected. To alter the steering characteristics, you'd need fiddle about with the infotainment system to access the settings, which I personally find a hassle.

So, my preference would be to integrate the steering setting with the sport button on the centre console. 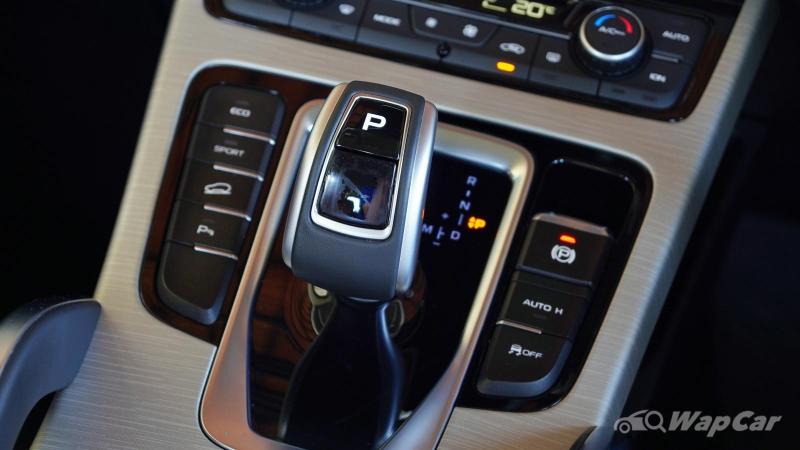 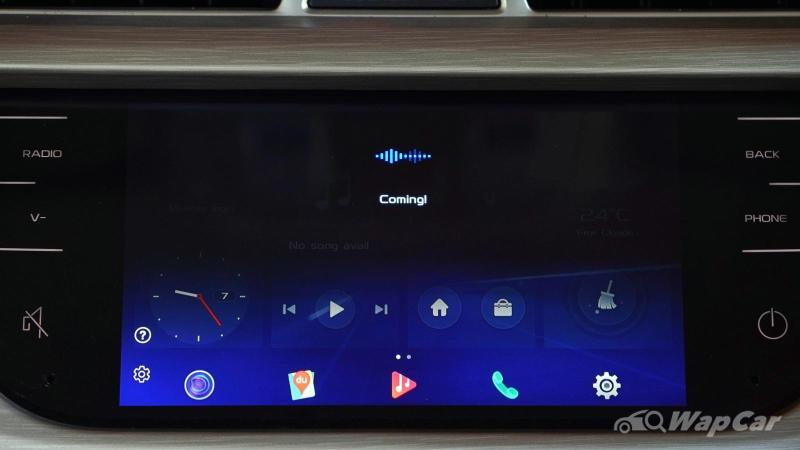 As brilliant as GKUI is, you are still forced to control your Spotify playlist from your phone, and it can’t read/reply your WhatsApp messages. 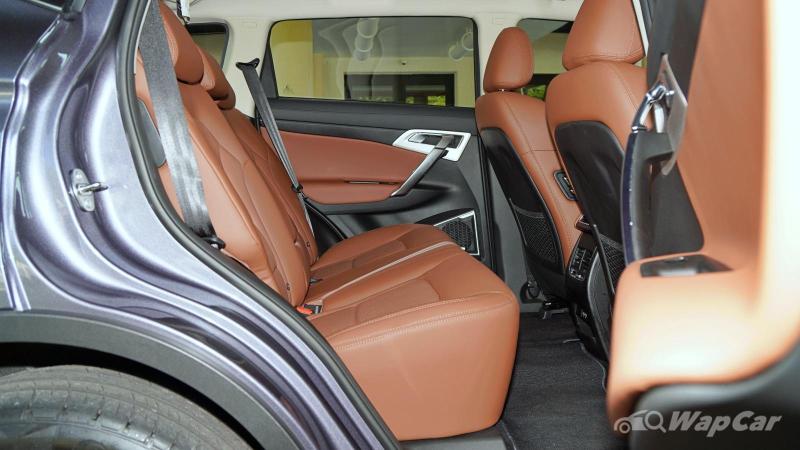 Space in the rear isn't quite as cavernous as in the Honda CR-V, but still respectable. There's about 3 tennis balls of kneeroom and 2 tennis balls of headroom for a 160 cm tall individual. 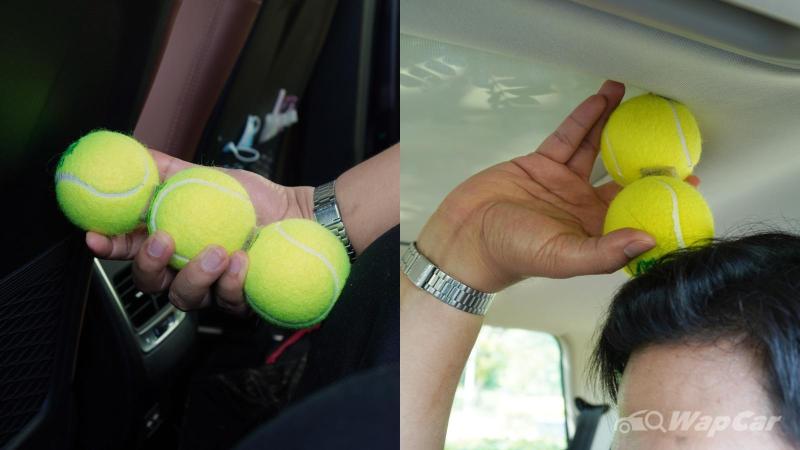 One last thing that’s not-so-good and it pertains to the practicality. The boot floor is relatively high and the opening is on the smaller side. The Proton X70’s boot height measures at 83 cm. In comparison, the Honda CR-V’s boot height is 62 cm. 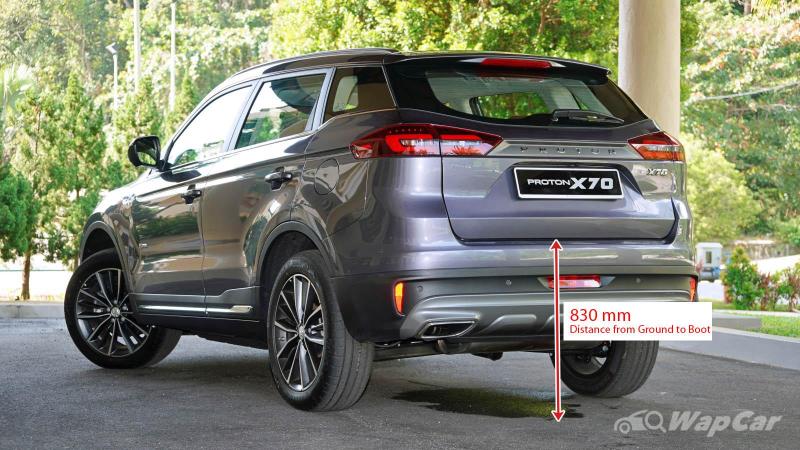 This makes loading and unloading heavy items more difficult in the Proton X70 than the lower boot floor and wider opening Honda CR-V. 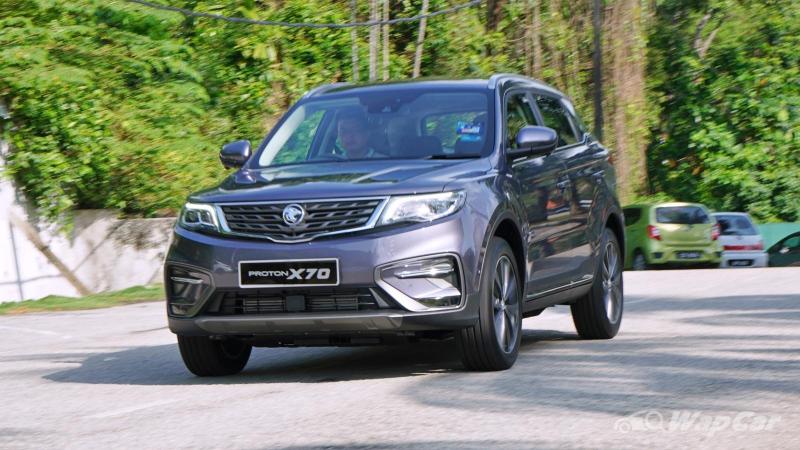 This may sound like a cliché but if I were to summarise the driving experience of the Proton X70 in one word – it’s refined. 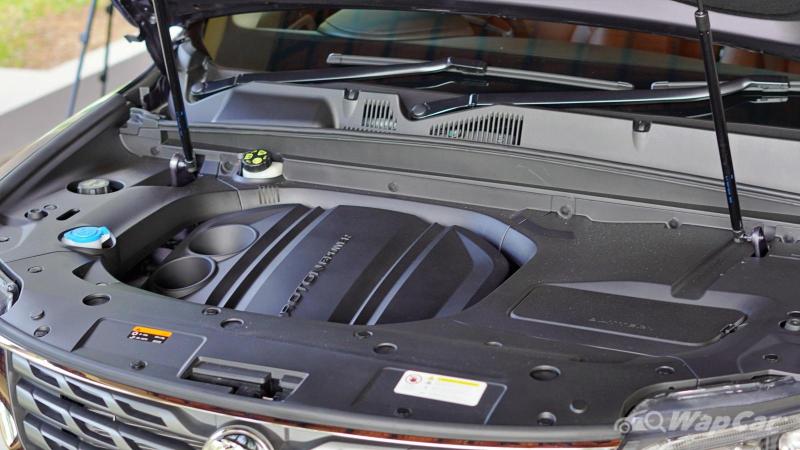 The only telltale sign it’s a dual-clutch is when the car is setting off. The revs climb up higher than usual, around 1,500 rpm or so, depending on road incline. And the sensation is akin to balancing the clutch and throttle in manual transmissions, if you still recall those.

If you’re expecting the kind of snappiness of DSG in Volkswagens for example, then you might be disappointed. But the leisurely shift speed is said to help with durability and for that, I think it’s a fair tradeoff. 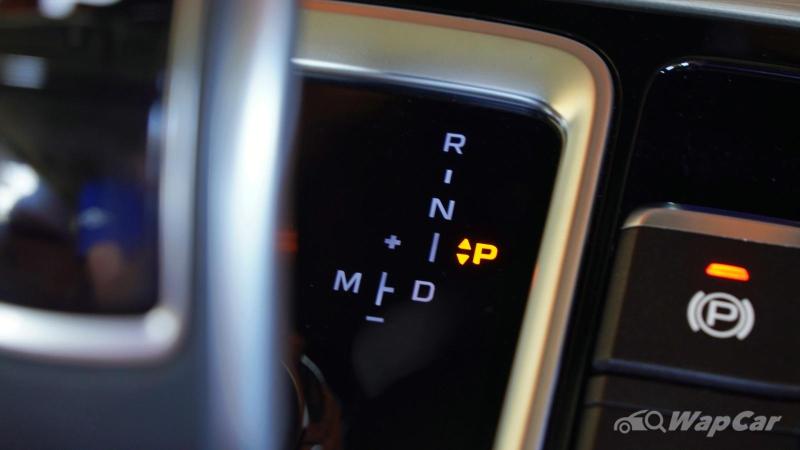 Steering in normal mode is light, while sport mode merely introduces additional resistance without any increase in feedback. The pedals have this nicely dampened feeling that adds to the refinement.

Straight-line performance is adequate considering its size and weight. 0-100 km/h sprint time is tested at 10.4 seconds. The healthy serving of torque makes daily and highway driving a more relaxing affair. And what a cruiser this is, it just munches the kilometres effortlessly. 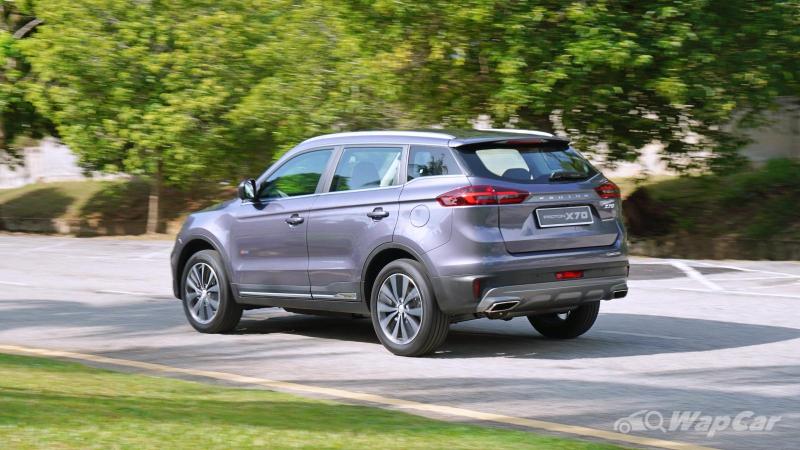 In terms of handling, the Proton X70 is not as sharp as the Mazda CX-5 nor does it possess the capability of the Subaru Forester. Steering isn’t the most accurate and you do feel the Proton X70’s high centre of gravity as well as the weight transfer in corners. But then again, this is a comfort-oriented SUV with that in mind, the Proton X70 performs admirably. 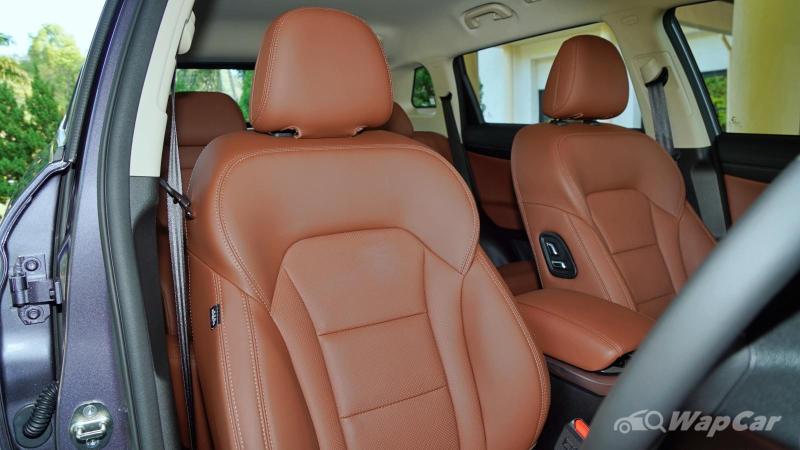 Ride comfort is the Proton X70’s strongest point. Despite having introduced stiffer springs and dampers for the locally-assembled Proton X70, the supple character of the fully-imported version is retained. 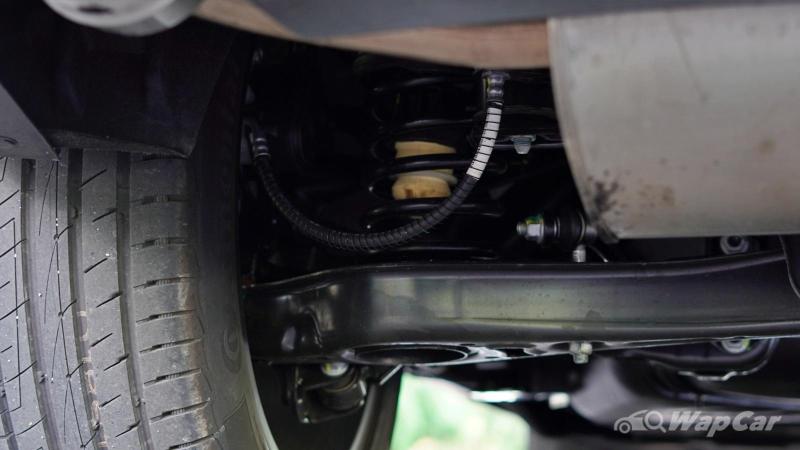 Lumps and bumps on the roads are rounded off with minimal suspension noises. Only abnormally large potholes or sharp edges can disrupt the otherwise serene cabin. At highway speeds, it flows along nicely with undulations. Overall, it’s a well-balanced suspension setup for an SUV. 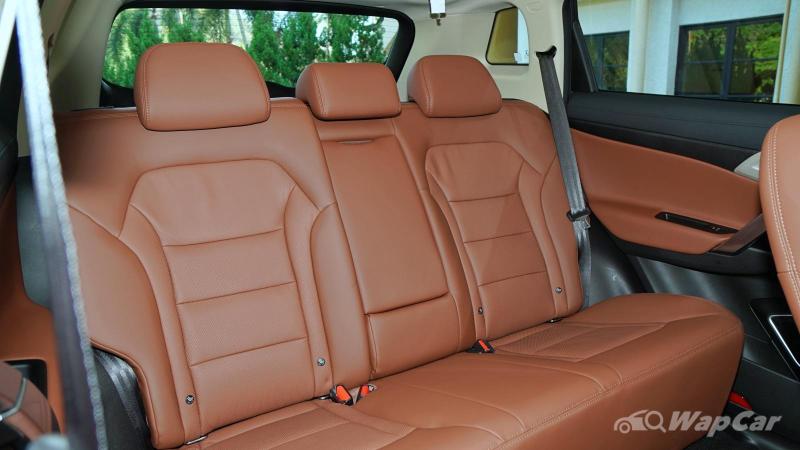 The seats are comfortable and supportive, both front and the nicely sculptured rear seats. There is lumbar adjustment for the driver seat, which was a godsend for myself during the media drive to the east coast as I was recovering from a lower back injury. It’s why I can attest to the comfort of the seats on longer journeys. 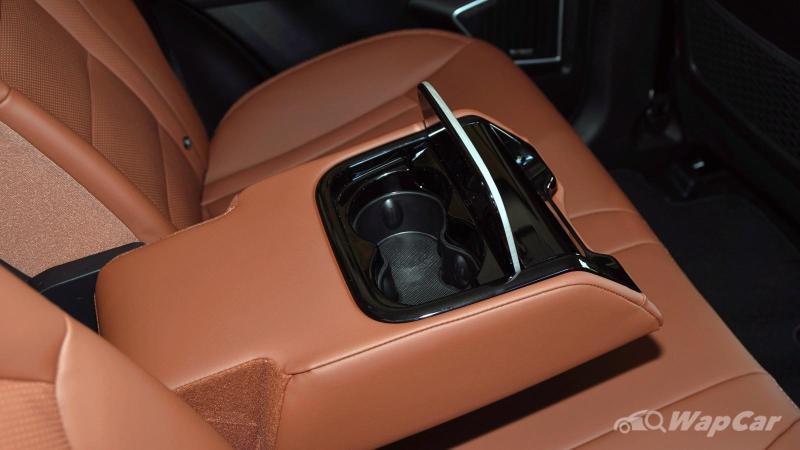 Cabin insulation remains one of the best in class with minimal rolling noise, be it engine or tyre noise. Wind noise however, does become apparent at triple-digit speeds. But that’s due to aerodynamics and shape of the car.

At 110 km/h, the sound level meter recorded an average of 68 dB, which is identical to the tectonically insulated Volkswagen Tiguan.

Fuel consumption - On the thirsty side 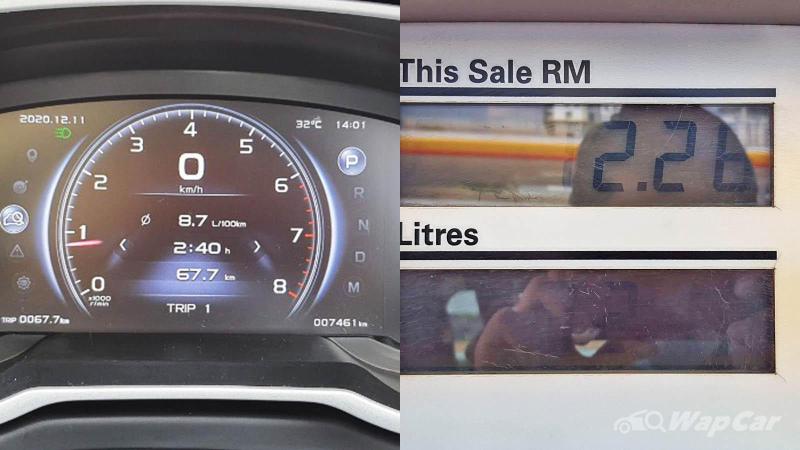 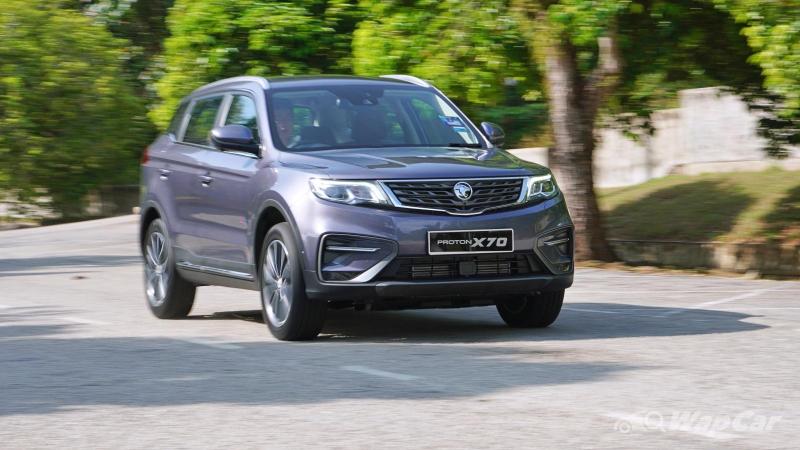 However, back when the fully-imported (CBU) Proton X70 was tested, it achieved 7.5-litre/100 km on a clear Sunday afternoon traffic with mostly highway driving.

Which means if your daily commute involves mostly city driving, you’re looking at an average fuel consumption of 10-litre/100 km. But on highways, an average of 7-litre/100 km is possible. 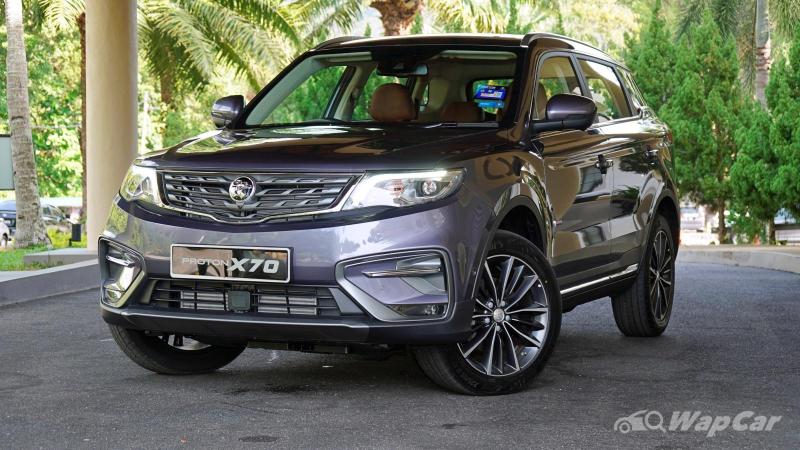 The Proton X70 does have a few flaws – fuel consumption is on the higher side, the infotainment system lacks Apple CarPlay/Android Auto connectivity, and the high boot floor somewhat affects practicality.

But at its price, the Proton X70 is still the most comfortable and well-equipped SUV for the money, not to mention the relatively upmarket interior. In fact, it’s even more comfortable than established rivals such as the Honda CR-V or Mazda CX-5. 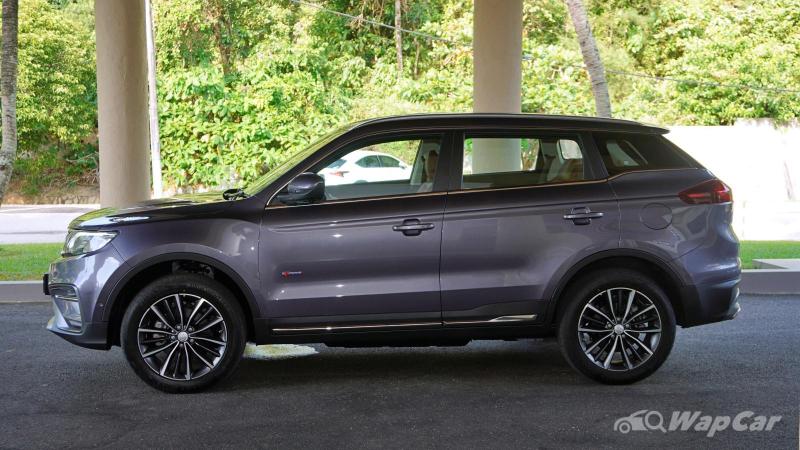 If you’re contemplating between the Proton X50 and X70, the Proton X70 would be the better choice for those who have higher priority on space and comfort. The Proton X50 has a nimbler driving experience and will appeal to those who prefer a smaller car to manoeuvre around town. 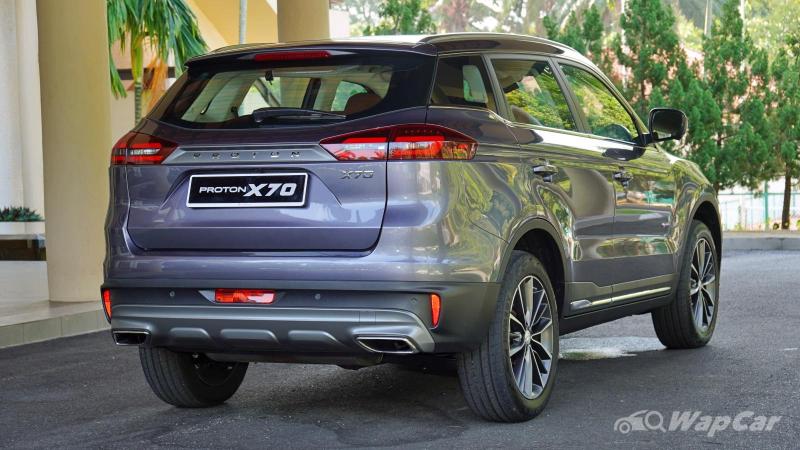 All in all, the Proton X70 offers the most value for money when it comes to comfort, space and features. And with this formula, it will continue to be one of the best-selling SUVs in our market. Would I buy one? If I were looking for a family SUV, yes.