Home > News > From foggy roads to congested cities, Honda Civic’s Sensing is one of the best

From foggy roads to congested cities, Honda Civic’s Sensing is one of the best 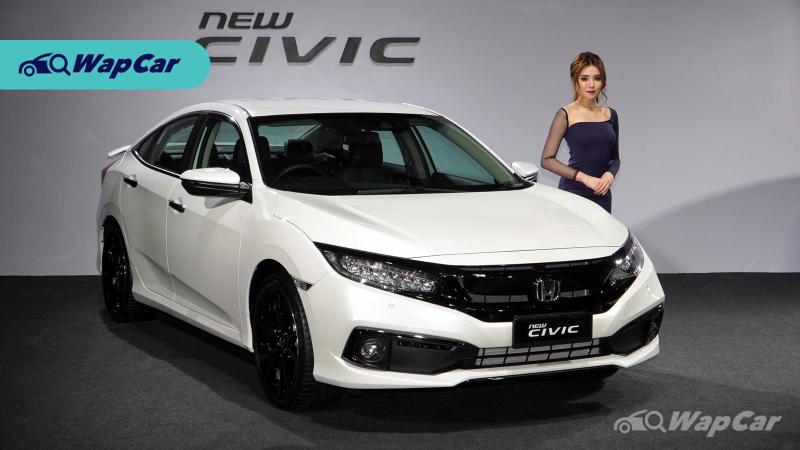 Last week, our driving instructor colleague Jason shared his thoughts on Advanced Driver Assistance Systems (ADAS), that driver assistance features are as its name implies, merely an assistive feature. It is not a be-all and end-all for car safety, because ultimately it is the behaviour of the idiot behind the wheel that matters the most.

Yes ADAS has its benefits, but it is important to remember that not all ADAS are the same. In our typical KL traffic, some ADAS are more annoying than they are helpful.

Some Lane Keep Assist functions for example, will fight against your steering input if you gently swerve out of your lane slightly to avoid a motorcycle or a pothole. 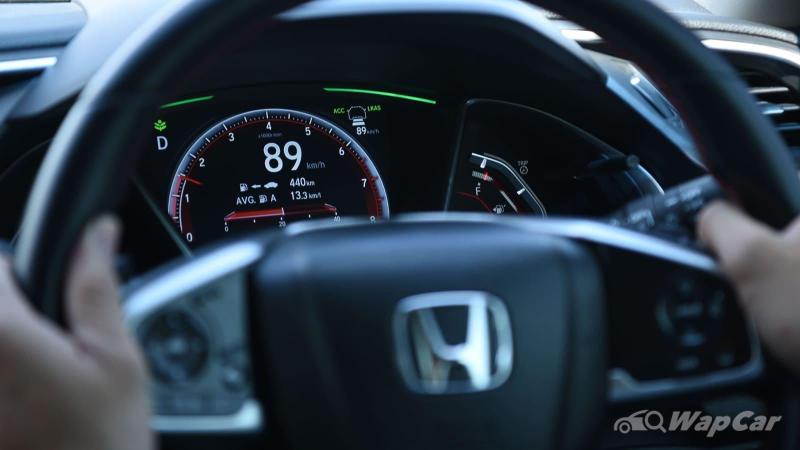 Others beep incessantly every time a motorcycle gets too close and sets off the car’s proximity alerts. In most cars, you can’t permanently shut these nonsense alerts off either!

Once, I had a poorly-calibrated Mercedes-Benz CLS 450’s AEB triggering prematurely (good thing I wasn’t rear-ended) in an otherwise typical Klang Valley messy rush-hour traffic scenario. Another time I had a Hyundai Ioniq's steering arguing with me about whether I can swerve to avoid potholes on a bad stretch of road in Sg. Buloh.

Which explains why I don't trust ADAS a lot. Yes, I believe ADAS is necessary for today’s cars, but only if it works well enough in our local traffic and I don’t have to turn it off. 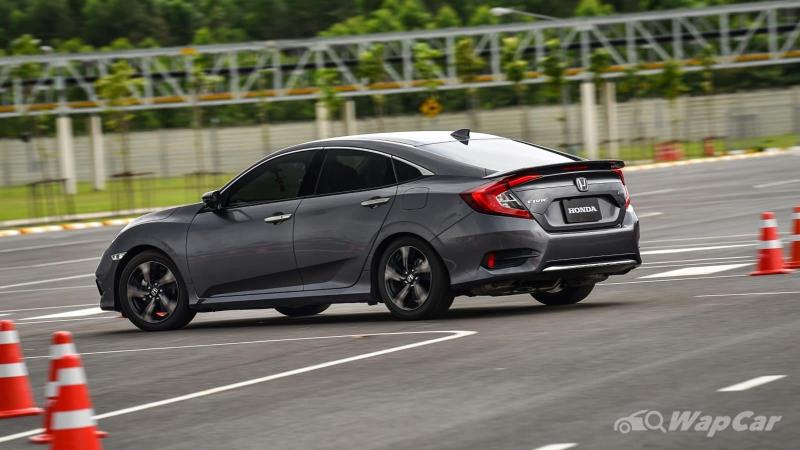 Having experienced so many different execution of ADAS in different cars, my own verdict is that the best ADAS, at least in our Malaysian context, are the ones made by Toyota and Honda. Specifically, Toyota Safety Sense and Honda Sensing. Interventions are subtle and it’s well calibrated for our local driving conditions.

Between the two, only Honda offered us the opportunity to gain a deeper understanding into its ADAS feature Honda Sensing, thanks to arrangements by Honda Malaysia.

Generally, it is safe to say that all ADAS can’t work in the rain or in bad weather conditions. If the ‘eyes’ of the car (the camera) can’t have a clear vision, the system won’t work. Honda’s Sensing is no different, or so we thought.

We’ve recently learned that actually, Honda Sensing’s AEB, which Honda refers to as Collision Mitigation Brake System (CMBS) has its development history traced to back to testing done in heavy rain and foggy conditions, then developed as City-Brake Active System, a predecessor to today’s CMBS.

City-Brake Assist System was first introduced in 2013 in the Japanese market Honda Jazz. Prior to that, Honda had already introduced CMBS (let’s call it version 1.0), but that version of CMBS is different from the one currently used in the Honda Sensing suite, and was designed to reduce the severity of impact rather than braking the car to a complete stop.

Japan is home to many hot springs and in certain months of the year, the roads surrounding hot springs can get very foggy. Honda didn't want to create a system that wouldn't work in a typical Japanese driving scenario.

The goal of City-Brake Assist System was not just to brake the car, but to brake at the last moment, right before the object. To be specific, it’s 50 cm away from the object, even in heavy fog. Such demanding development work is not common in other manufacturers.

However since it’s difficult to guarantee its performance in bad weather conditions – which can vary by a lot - Honda prefers to err on the side of caution and if you were to ask them if Honda Sensing works in bad weather, the official answer is no – which is the only correct answer but it’s good to know that the system is developed under standards that are much more demanding than those used by even manufacturers of German luxury cars.

Today, the functions of City-Brake Assist has been integrated into a new CMBS, which is now capable of full braking.

Apart from bad weather, CMBS was also developed to detect not just other vehicles but also children. However like the bad weather capability in CMBS, Honda prefers not to market it as such because they are rather conservative with their claims. Like weather, few can predict children’s behaviour.

When asked if Sensing can detect children, Honda says Sensing is capable of detecting human-like figures taller than 1 metre. Whether is a 1-metre tall human defined as a child or not is up to your interpretation of the law.

Part of the reason why Honda Sensing works much better than other manufacturer’s ADAS is that the entire system is developed in-house. Most manufacturers, typically German ones, would simply buy the solution from a supplier.

Honda’s in-house approach is of course a lot more costly but it allows Honda to fine-tune and improve upon its design in ways would not be possible if they had to rely on a third-party supplier. 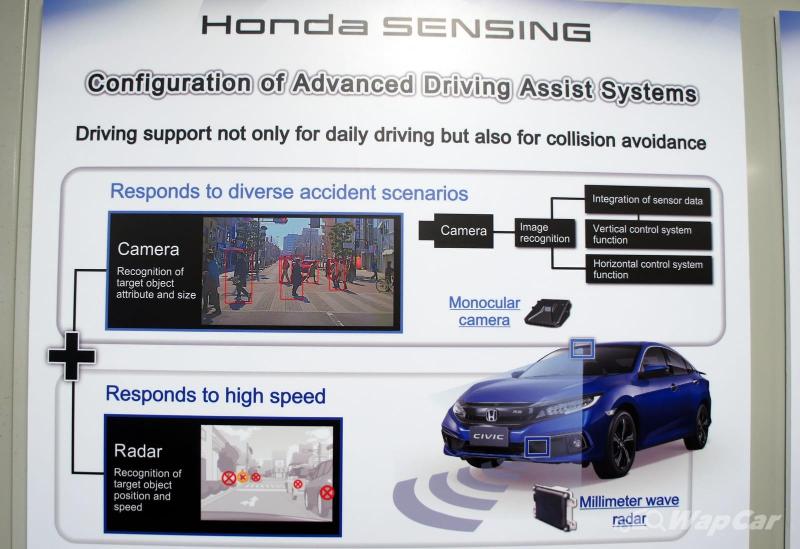 The core of Honda Sensing hardware is the monocular camera mounted behind the rear-view mirror and the milimetre wave rader mounted the lower section of the front bumper – both items’ hardware and software are developed by Honda (but manufactured under contract by another company).

Yoji Sasabuchi, an engineer at Honda R&D’s Automobile R&D Center who developed the controls for the CMBS function for Honda Sensing said, “The camera by itself can’t identify a pedestrian until it detects its shape. Paired with millimeter-wave radar, however, it detects that something is there. That gives the camera time to focus on the area and extract sufficient information to judge whether it’s a pedestrian or not. The same goes when rain is falling and the camera has difficulty identifying objects. We leveraged these two sensors to full advantage, and created new capabilities.” 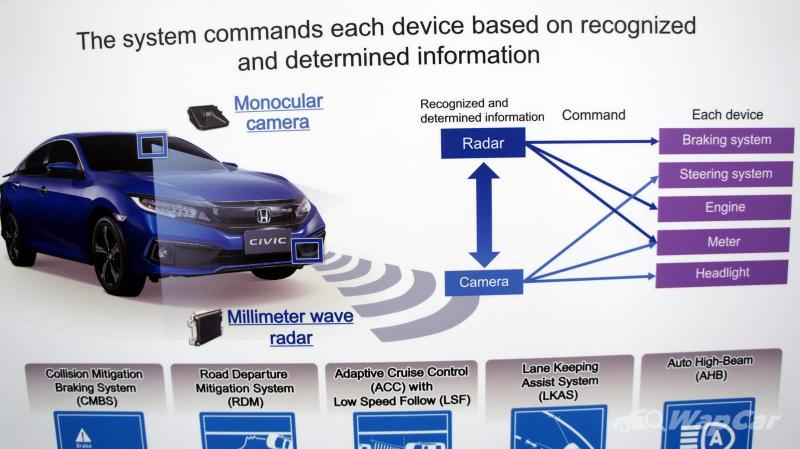 “Developing a technology ourselves instead of simply relying on buying it from another company will help us to judge its strengths and weaknesses and to know how to make it better when the manufacturer gives us a technical proposal. This is true even for something as seemingly trivial as one small camera. And when it’s difficult to achieve a certain target, we can find out what the problem is,” explained Sasabuchi.

“World-first or world-leading technologies aren’t built on something you go out and buy. They’re something you make yourself, and that’s what we want to do,” he added.

Because Honda owns the rights the hardware and software used in Sensing, it can tweak it in any way they want, refining it for different models. For example, a Honda CR-V drives differently from a Honda Civic, likewise for a Honda Accord.

Not just that, they can also adapt it to different driving conditions in different markets. Prior to launching Sensing in Malaysia, engineers from Honda R&D spent many hours driving in Malaysia, gathering data on our road markings and driving conditions, to fine-tune the Lane Keeping Assist, Road Departure Mitigation and CMBS function in Sensing. Again, this is only possible if they hold full control over the technology.

Two Honda models were imported into Malaysia for this purpose – a Honda Odyssey and a Honda Legend, both equipped with Japanese specs Sensing. To our knowledge, Honda Malaysia is the only company to do such a highly detailed level of ADAS technology localization.

Daisuke Hanzawa, the engineer at Honda R&D responsible for fine-tuning Honda Sensing for Malaysia said, “We didn’t want to develop a system where the driver will end up turning it off most of the time.”

Naoto Sen, chief engineer for Honda Sensing explained to us that because lane markings on Malaysian roads are not consistent, and prevalence of motorcyclists splitting lanes and weaving between lanes mean that settings used for European or Japanese markets are not suitable for Malaysia, and adjustments are required.

“The system needs to be precise, but at the same time, it shouldn’t give the driver a false sense of security. We are not building a system to replace the driver so intervention has to be precise, triggering only at the very last moment. Maintaining this fine balance is tricky,” explained Sen.

The result is a Lane Keeping Assist that we will happily leave it on in the background, CMBS that won't slam the brakes just because a car is inching its way into your lane, and an Adaptive Cruise Control with Stop-Go (Honda calls it Low Speed Follow) that works fine enough on Federal Highway.

The Low Speed Follow function is still not perfect though. You still need to watch out for cars filtering in from extreme angles, angles that are beyond the camera and radar’s coverage. Like we said earlier, these are merely assistive functions. You as the driver is responsible for the car’s operation. In any case, I trust Sensing more than any other brands.

The same Honda Sensing is currently available on the new Civic, CR-V, all-new Accord, and Odyssey. Meanwhile, archrival Toyota Safety Sense is available in Corolla Altis, Camry, and RAV4, is also equally smooth. 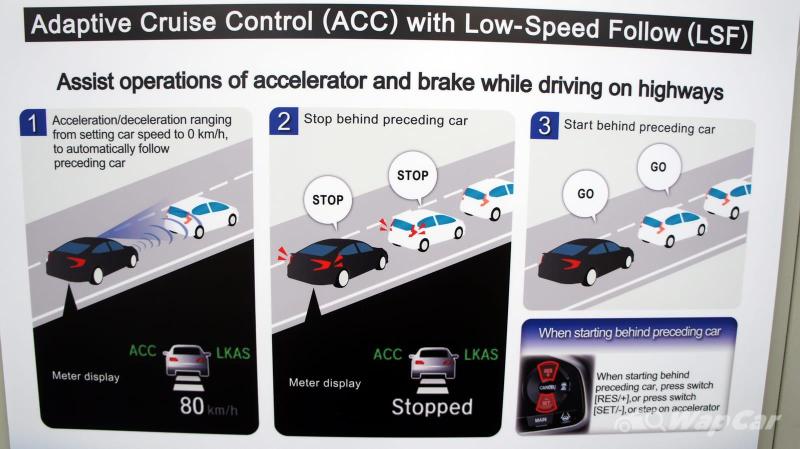 Another company that develops its own ADAS is Subaru. Fine-tuning work for our Malaysian-spec EyeSight was done in Singapore, which as you can imagine, is still not quite a good representation of our local driving conditions but we have no complaints with how well it works, at least in clear weather.

Subaru’s EyeSight relies only on a pair of cameras (no radar). It’s a simpler setup but somehow Subaru has managed to make it work nearly as well (bad weather will compromise accuracy of camera-only systems more than others), despite using less sophisticated hardware.