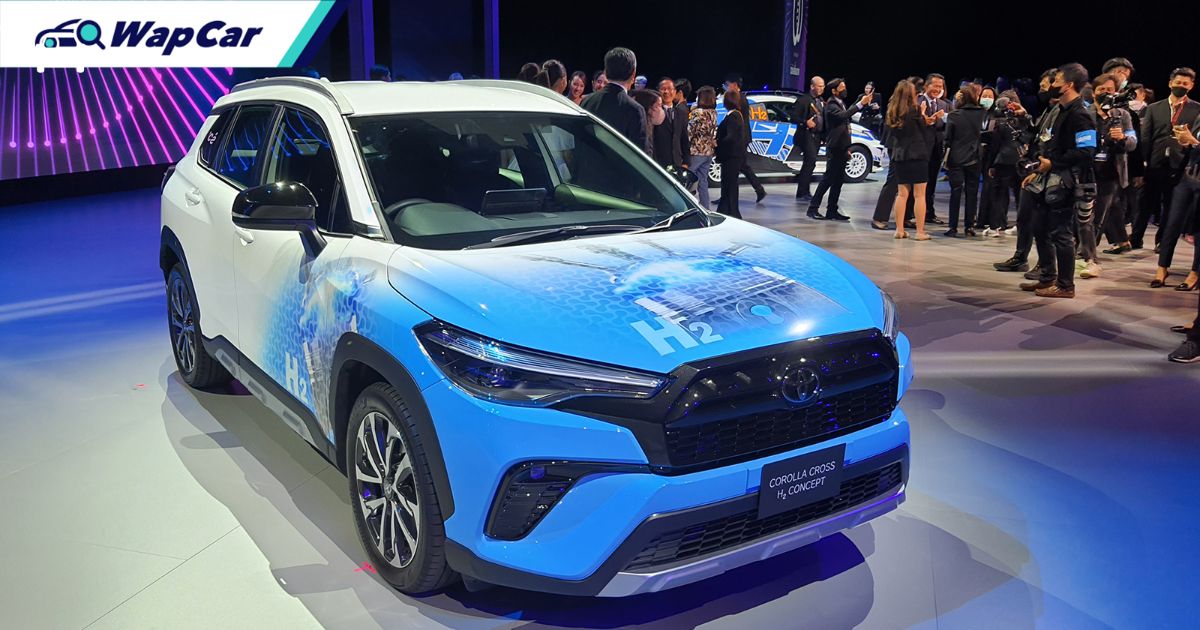 Enthusiasts have been increasingly lamenting the greenification of our cars and roads. Many are worried that the rise of electric vehicles, and the concern of emissions over everything else, will wipe out the joys of a sonorous engine.

The manual gearbox? Don't even mention it.

Toyota's engineers are confident that won't be the case. "We think sound is essential. We are developing the hydrogen engine to preserve the fun-to-drive engine, and the sound for the future," says Keisuke Fujikura, a member of the Toyota Corolla Cross Hydrogen (H2) Concept.

Having experienced the very prototype in Thailand recently, we left thinking that hey, this SUV might just be the one that keeps the recipe we know and love around for longer. 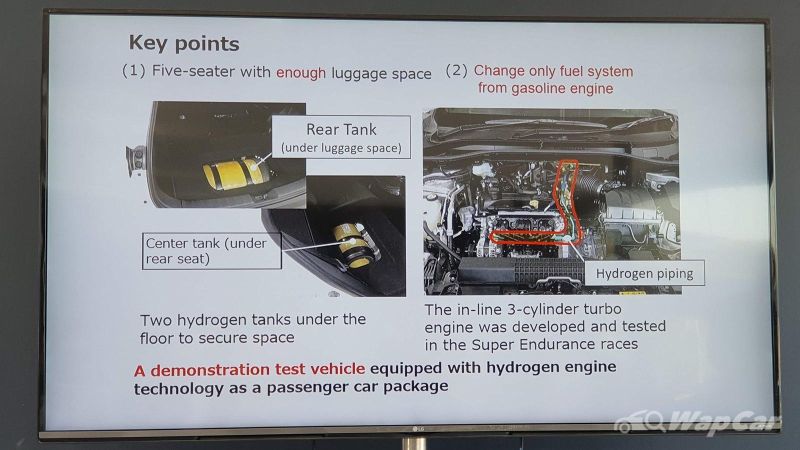 It's fair to ask how the Corolla Cross is suddenly the last bastion of all things good and fun. Don't get us wrong, it's less about the car itself, but more on the leaps of technology that makes things possible.

Because if you ask Toyota, they too want to keep your classics running, just cleaner.

The motley crew of people working on the project speaks for themselves. A lot of the knowhow that goes under the hood – we'll get to that in a bit – comes from their time on the track with ORC Rookie Racing, and plenty of staffers are engineers with Gazoo Racing (GR), Fujikura-san included.

GR's current crop of products no longer require expository paragraphs. 'Fun to drive' is a promise, not a catchphrase.

Part of that means there needs to be a way to make current internal combustion engines use carbon-neutral fuels. The G16E-GTS in this Corolla Cross H2 Concept previews just that, with the only changes done are the swapping of the petrol tank with a pair of hydrogen canisters, new injectors, and spark plugs. 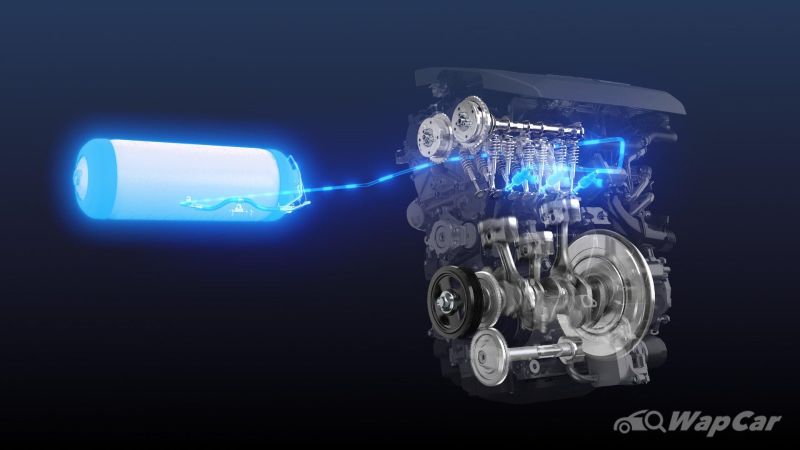 "Hydrogen engines only change the fuel system from the petrol engine. In other words, we can utilise engine technologies that we've developed up to now," explained Fujikura-san.

A similar setup is in the GR Corolla race car and the GR Yaris rally car prototypes. Both 1.6-litre turbocharged engines have found some measure of success on the track (off it too), and have proven to be generally quite reliable.

Not to be confused with hydrogen fuel cell Toyota Mirai, which is an electric vehicle that makes its own electricity on-the-go by mixing hydrogen and oxygen in its fuel stacks, this Corolla Cross is a combustion engine car, except that you fuel it with hydrogen.

Speaking of which, Toyota's forays into motorsports deserve more than a passing mention. The results are tangible – refueling the GR Corolla with hydrogen has improved to just under 90 seconds.

It's an eternity on track we'll admit, but nothing out of the ordinary when it comes to filling up your family SUV, no?

Plus, as they race further, there's always new discoveries to be made; whether it's in the powertrain, or the packaging, transport, and utilisation of hydrogen.

Also read: EV is not the only future; Thailand launches its first prototype hydrogen station for FCEV 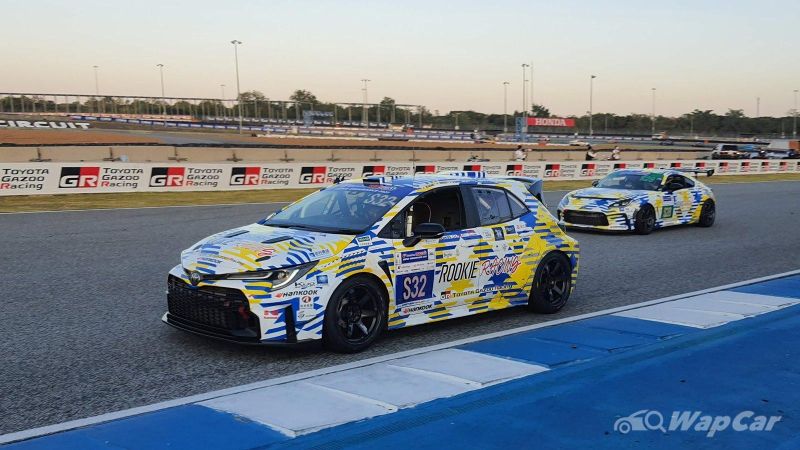 One such gain is in power, where Toyota says they've been able to increase hydrogen combustion power by 24%, torque by 33%, and range by 30%, acheiving about the same level of performance like regular, petrol-engined cars do.

Powertrain's one half the battle. With all other internal combustion hydrogen-fuelled cars are two seaters, where then does knowhow come in making the Corolla Cross suitable for families?

How to get seating for five? 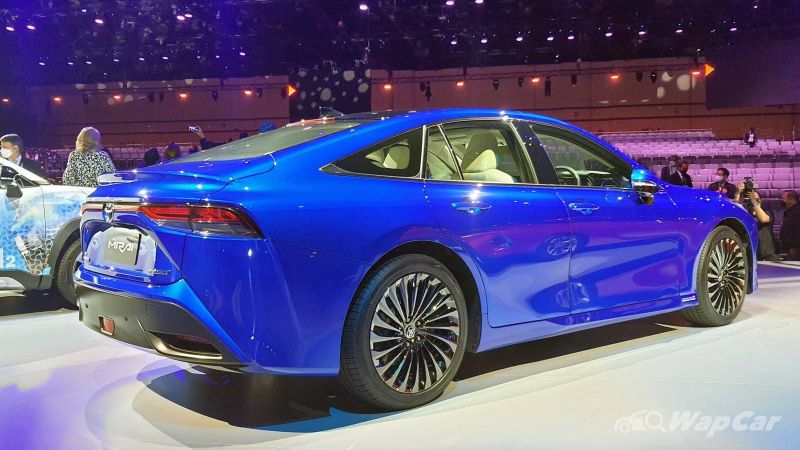 That knowledge comes from the low-slung and sleek fuel-cell EV that seats five, the Toyota Mirai. 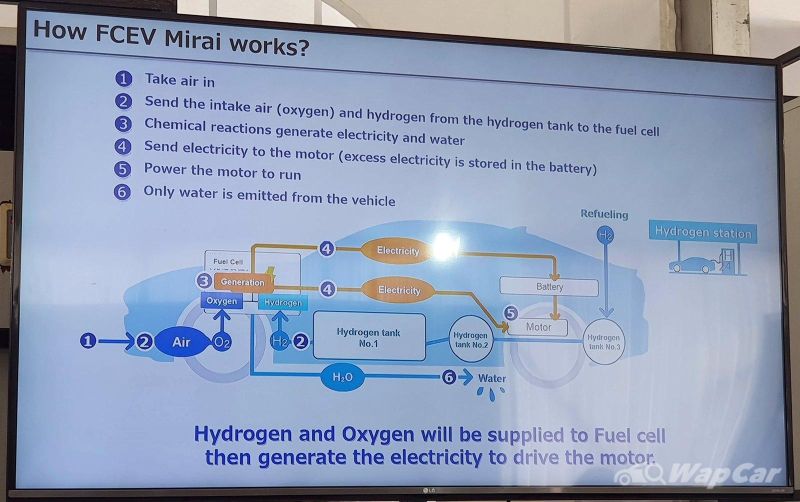 Packaging the Mirai is an exercise in creativity in itself. There's two, high-pressure hydrogen tanks to stuff by the chassis, along with the entire electric powertrain. 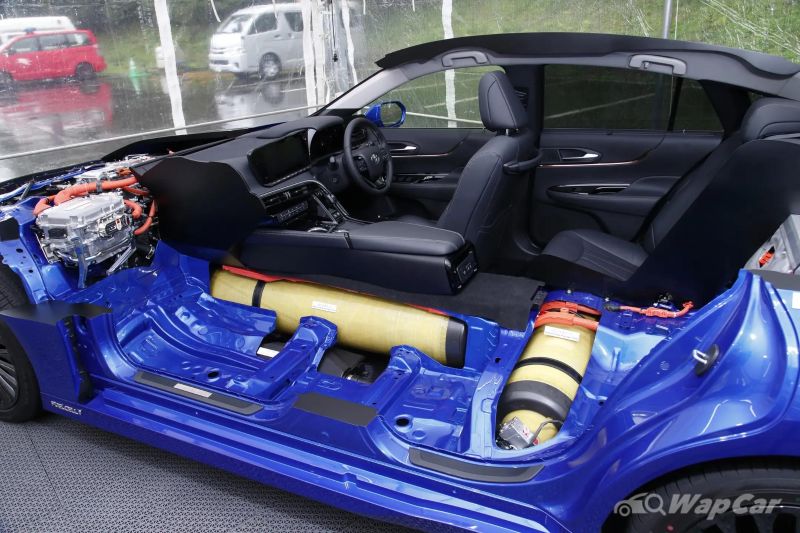 The same concept learnt there is applied to the Corolla Cross, where the tanks are placed below the rear seats, and one right under the boot floor. This translates to more than enough space to seat five passengers, as well as a majorly useable bootspace. 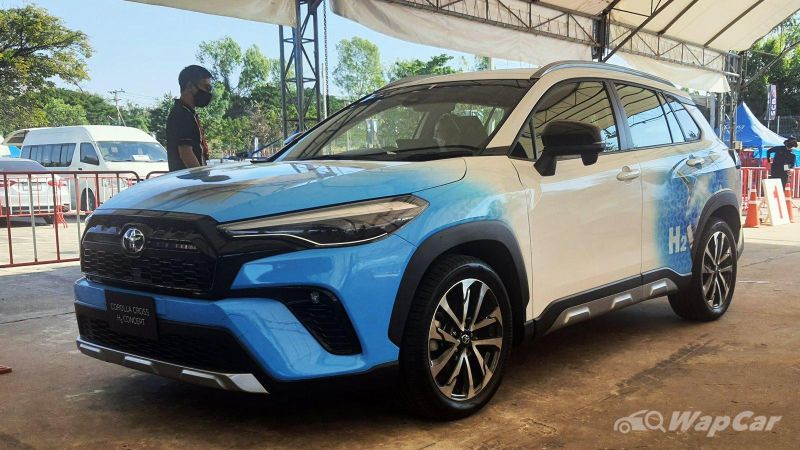 In any case, the proof of pudding is in the eating. The standard is high – I've experienced the GR Yaris before, so having hydrogen power neutering it would be an immense buzzkill.

First impressions? Cheeky. Hearing the Corolla Cross burble to life was tickling, because you just don't expect something so pedestrian to sound like that. More so when the driver hurtled it around the short test track, punctuated by the chirps and chitters of the turbo. 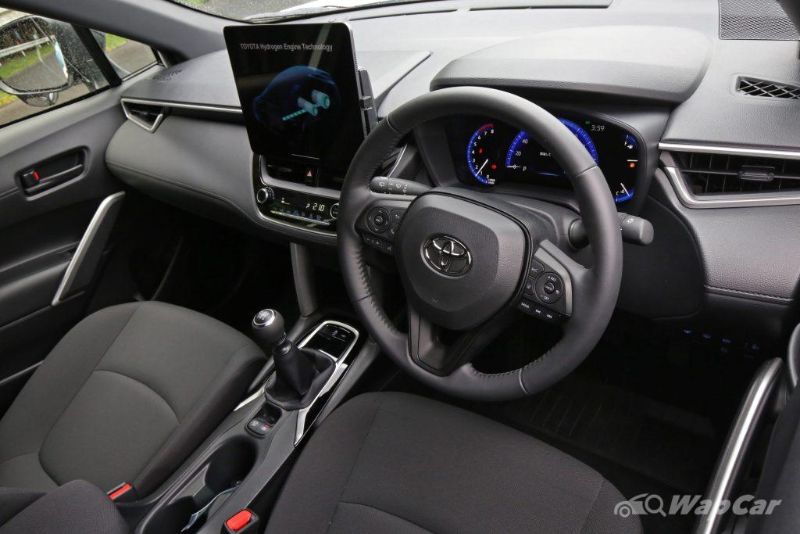 Entertaining it was too, as the Corolla Cross healthily built up speed along the straights. Power figures were still coded in secrecy (slightly lesser than the base 272 PS the G16E-GTS makes, for initial tests and reliability studies), yet it seems perfectly adequate for a family SUV. 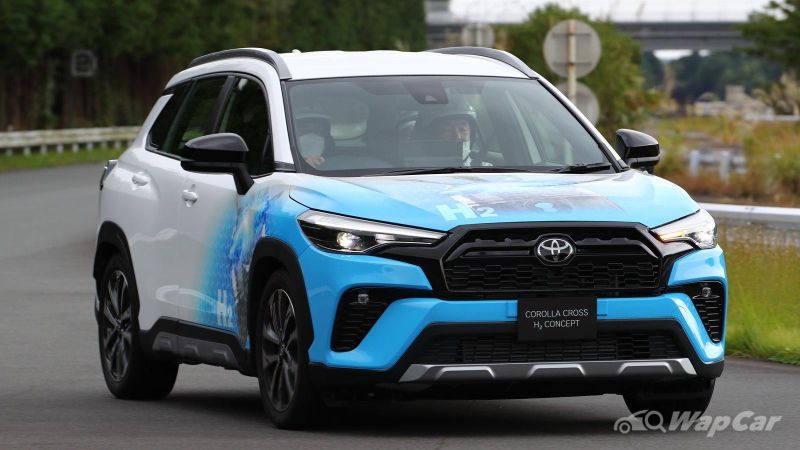 In the comfort test and slalom zones, it did OK. Sitting at the back, weight didn't feel like too much of an issue. The twin carbon-fibre reinforced tanks weigh a combined 83 kgs in the Mirai, thereabouts here – added to its lumbering feeling, but nothing where the inertia is too great. 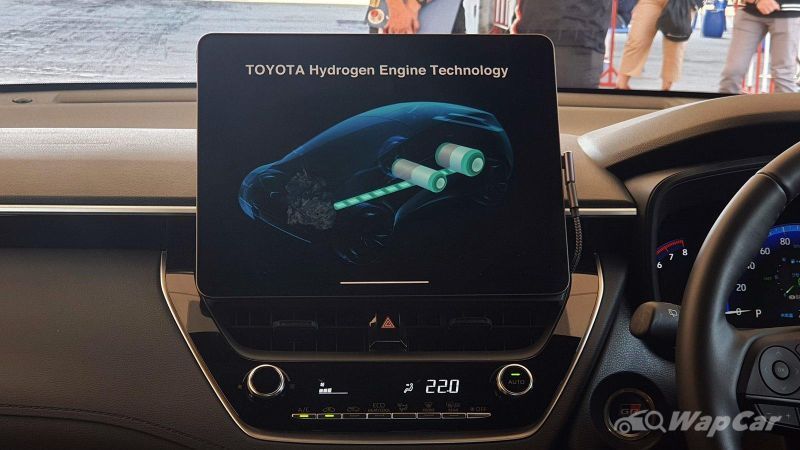 Overall, it's special. Not just as a product on its own, but what it stands for – at least someone is doing something to keep the recipe we know and love alive for us to enjoy, well into a petrol-less future.

The journey ahead is arduous; Toyota says they're only about 40% on the path to commercialisation with products like these.

Yet, it's a journey worth waiting on, if only to be more hopeful of the future. If you're one of those who's pacing nervously, waiting for the death knell of sweet-sounding petrol engines, then Toyota's efforts are one worthy of support.

Also read: To continue his teacher's dream, Akio Toyoda is racing in Thailand to show 5 solutions are better than 1 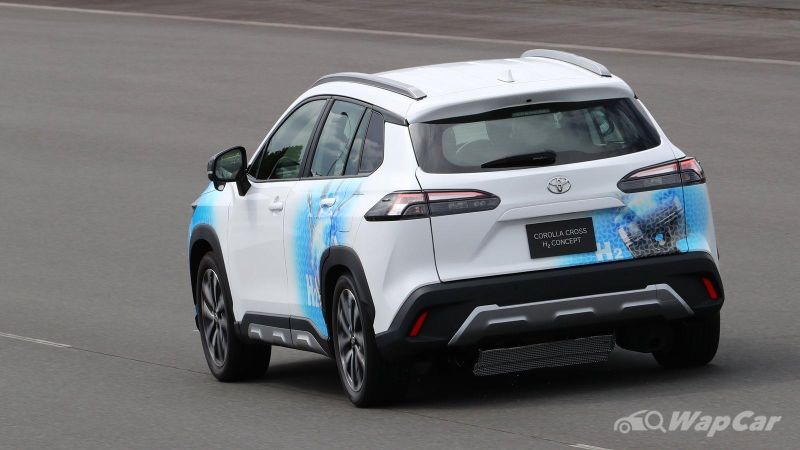 Work naturally doesn't end here, as WapCar.my was made privy that development work of automatic transmisison variants are underway, alongside different engines to take this technology further.

But first, it's back to Japan with the Corolla Cross Hydrogen Concept, where it'll soon brave the winter.