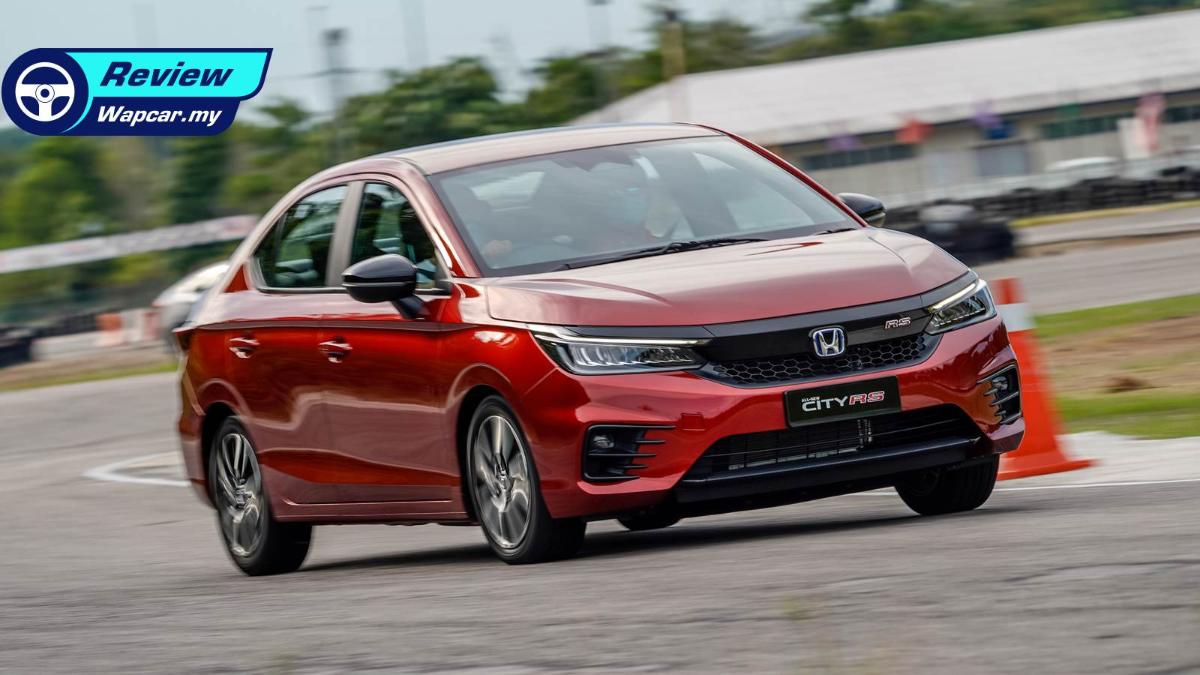 Before we go any further, we need to establish two things. First, the all-new fifth generation 2020 Honda City RS e:HEV hybrid (GN series) is yet to be launched in Malaysia. Second, prices have not been announced.

However, we were given an early preview drive in the all-new 2020 City, in its range topping RS guise, on the condition that we don't mention anything about City's interior – that will have to wait until the car is launched. 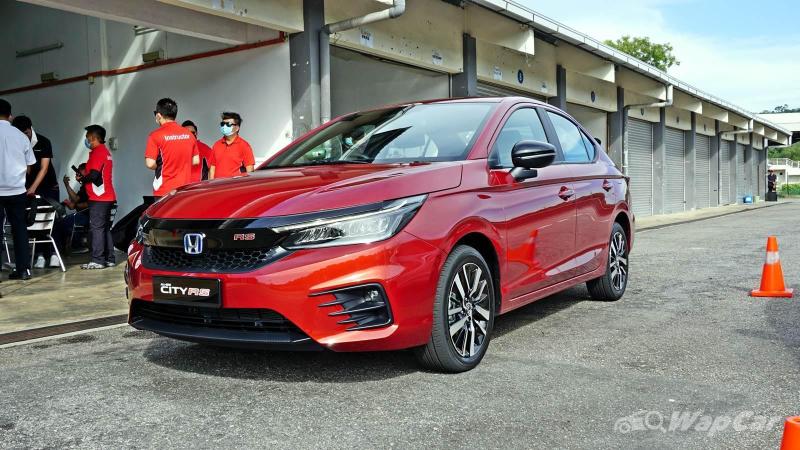 We were only given a two-lap drive around the Melaka International Motorsport Circuit, but out of the two lap, half a lap was to experience Honda Sensing's Adaptive Cruise Control and Road Departure Mitigation feature. 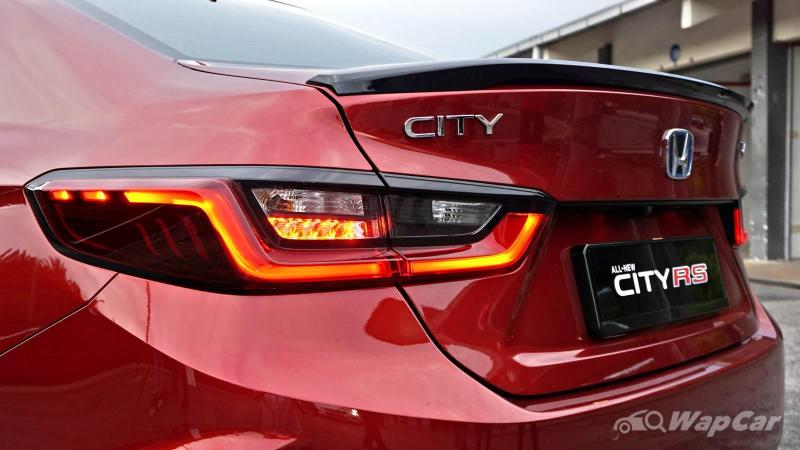 Also available for us to compare were the outgoing generation Honda City i-DCD Sport Hybrid Malaysia and Toyota Vios, which made things a little bit more interesting. 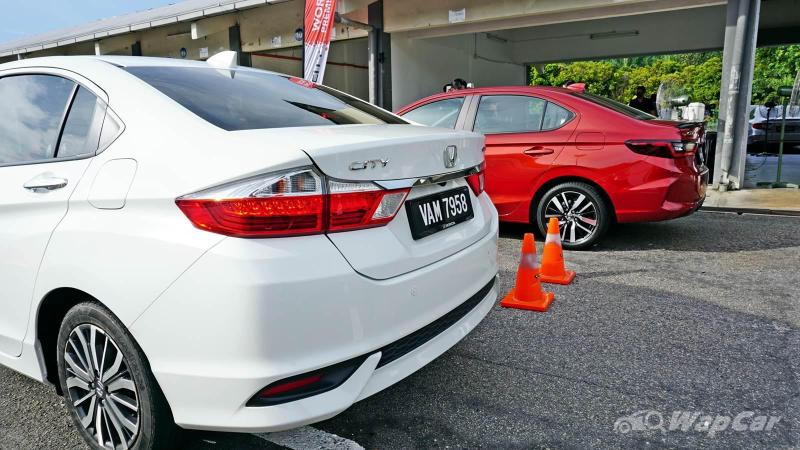 Also, our local 2020 Honda City RS is not the same model that's currently on sale in Thailand, despite using the same name. Thailand's City RS uses a 1.0-litre 3-cylinder VTEC Turbo engine, an engine that we've already sampled earlier and came back unimpressed with it.

It's a low CO2 emission engine but without CO2-based tax benefits enjoyed by buyers in Thailand, it makes little sense to introduce the higher cost engine in Malaysia. While output of the 1.0-litre turbocharged 3-cylinder looks good on paper, its real world driving experience feels poorer than a larger capacity naturally aspirated four-cylinder.

A world's first, produced by Honda Malaysia. What are the "national" brands doing?

The Malaysian specifications 2020 Honda City RS is the first in the world to have Honda's latest two-motor i-MMD (Intelligent Multi-Mode Drive) full-hybrid drivetrain. 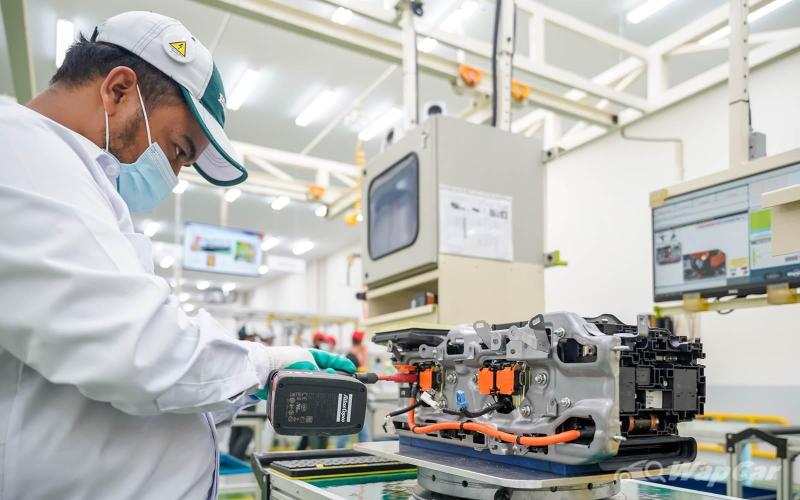 The first motor is the traction motor that drives the wheels and recharges the high voltage hybrid (traction) battery via regenerative braking, while the second motor is a generator that provides additional electricity to supplement to traction battery in driving the traction motor. 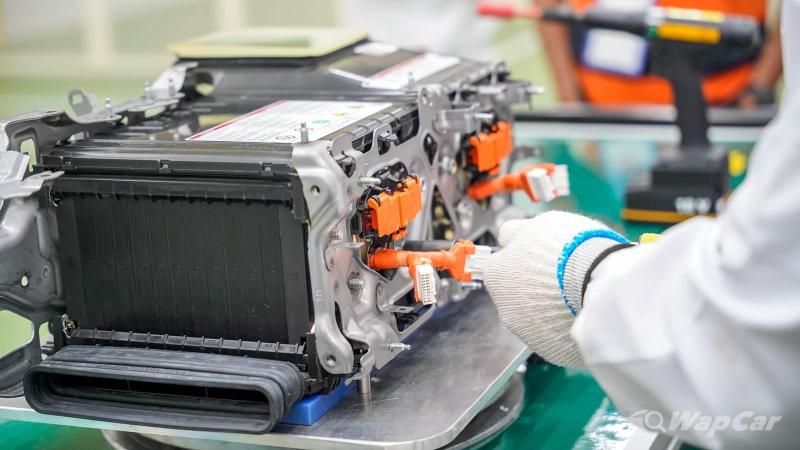 Operated by Honda Assembly Sdn. Bhd., the battery plant is located in Pegoh, just next to Honda Malaysia's plant. Its establishment is an honour for Malaysia because even though BMW, Mercedes-Benz, Toyota, and Hyundai have decided to skip Malaysia in favour of Thailand and Indonesia to set up their battery plants, Honda has decided on Malaysia. 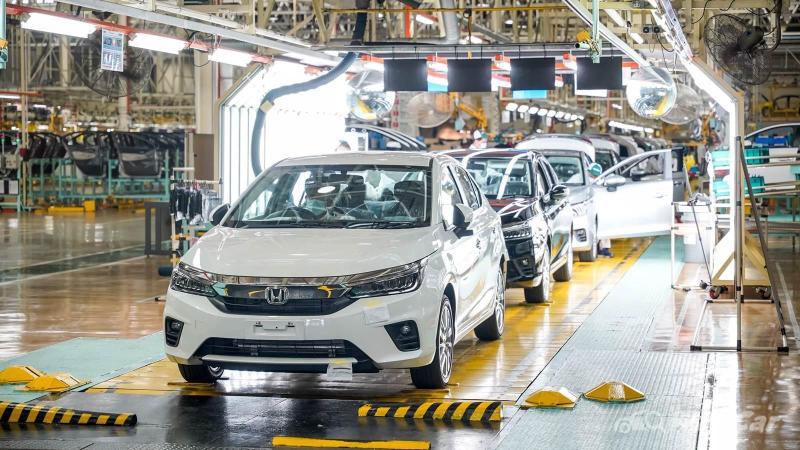 Which begs the question, why is Malaysia's first major step in producing electromobility parts championed by Honda and not our quasi-national Proton or Perodua?

And don't ever complain that Malaysian consumers get lower specifications cars, because our 2020 Honda City RS has the highest specifications in the world, with 8 features not available in Thailand, including rear disc brakes, Honda Sensing, LaneWatch, and electric parking brake (EPB).

Unlike Toyota's series-parallel Hybrid Synergy Drive full-hybrid used in the Prius or Camry Hybrid, Honda's i-MMD full-hybrid works a bit differently. It's closer to an electric vehicle (EV) rather than a regular hybrid. 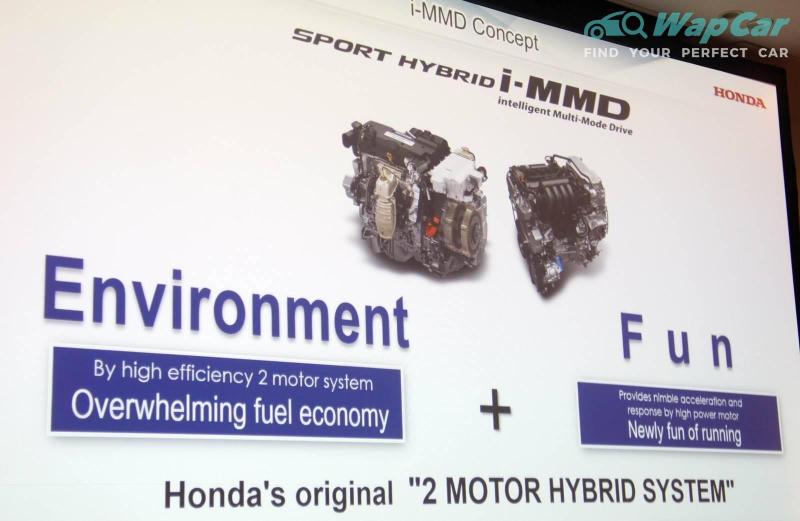 Most of the time, it's the electric traction motor that drives the 2020 Honda City RS, so you get a rather EV-like smooth driving experience, with instantaneous 253 Nm torque generated by the 80 kW (109 PS) traction motor, available from 0.1 rpm, spinning up to 13,300 rpm.

The petrol engine (1.5-litre naturally-aspirated DOHC, 4-cylinder Atkinson cycle, port injection) only kicks in to either drive the generator to provide additional power for the traction motor, or to drive the wheels directly during high speed cruising, bypassing the electric motor via a clutch. 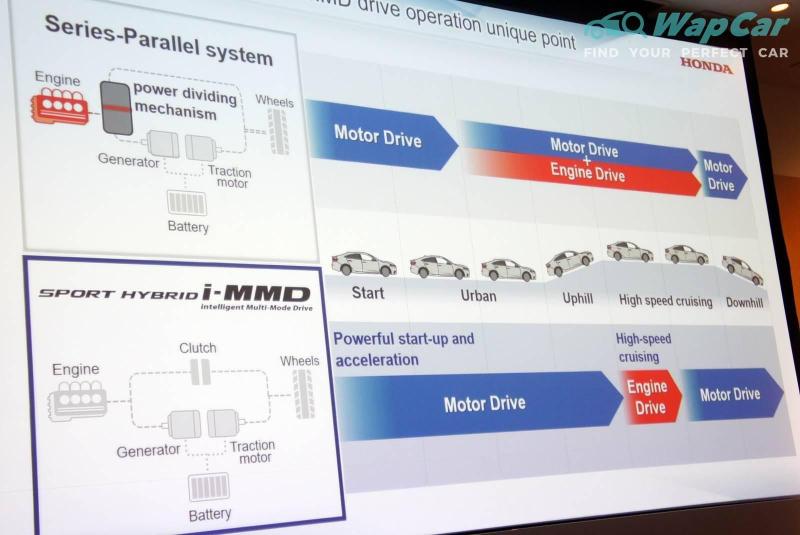 The specs sheet says it uses an E-CVT transmission, but it works nothing like a conventional CVT. The E suffix refers to the electric motor which is essentially what its transmission is – a direct drive motor that provides a step-less transmission driving experience.

It's quiet. Much quieter than the previous generation City Hybrid i-DCD with a 7-speed dual-clutch transmission.

When the engine does kick in, it doesn't sound as rough as the previous City Hybrid. 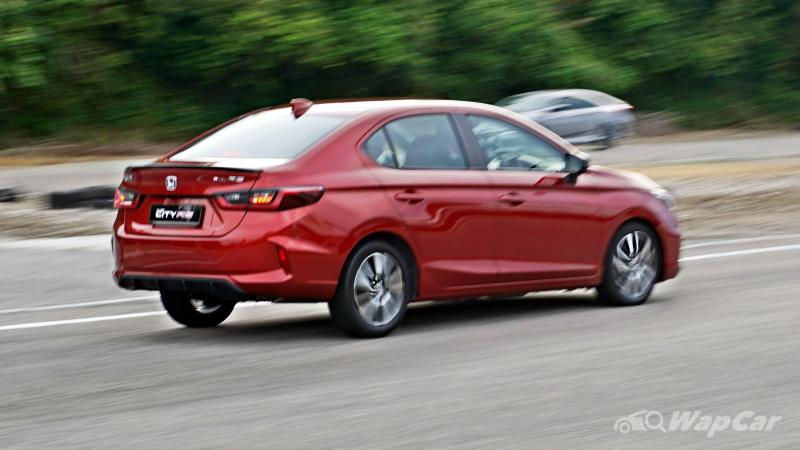 You've seen the controversial 253 Nm instant torque teaser ads but if you're looking for dramatic standing start accelerations, you'll be disappointed. The E-CVT gives a very smooth acceleration and feels rather inert, and the quiet cabin makes the car feel slower than it actually is.

However in a drag race, the 2020 City RS i-MMD will murder the previous City Hybrid i-DCD's time (acceleration data to be revealed at launch) but the quiet cabin and step-less E-CVT makes it feel slower than the snappy shifting 7-speed dual-clutch i-DCD, when the former is actually a lot faster.

The old City Hybrid i-DCD makes a lot of drama as the speedometer climbs. A lot of noise, you feel every gear shift, you feel the vibration on the accelerator pedal, and mind you it's still properly quick – 10.6 seconds in our own test, not sports car fast but it's a lot faster than the Toyota Vios’ 12.7 seconds, and the Volkswagen Vento 1.2 TSI's 10.9 seconds.

Because you feel more engaged with the car's mechanicals, the old City Hybrid is more of a car guy's car than the new 2020 Honda City RS, which will ignore all old school opinions and just keep pulling further away thanks to its surging wave of electric motor torque.

Like an electric vehicle, you can adjust the 2020 Honda City RS' regenerative braking intensity, but since we can't tell you about the car's interior, we can't go into the specifics yet. 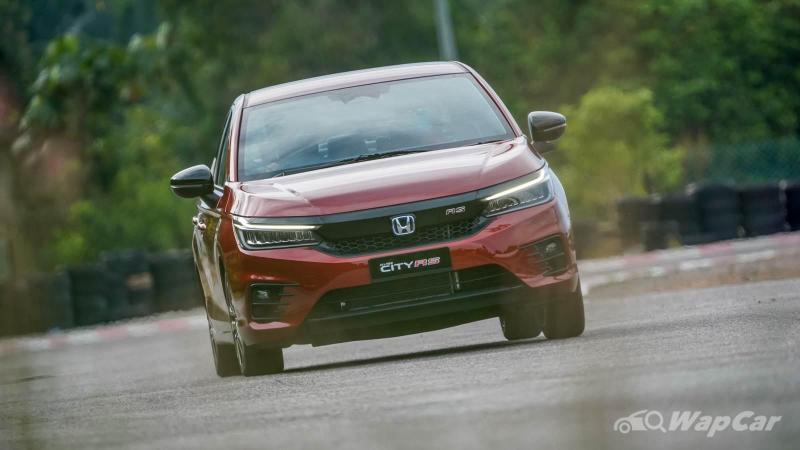 We are happy to note that the all-new 2020 Honda City RS has finally fixed our biggest problem with the previous Honda City – the lifeless, overly light steering wheel.

The previous Honda City had a remarkably competent chassis but it takes a lot of skills to exploit its potential. Mechanical grip is plenty but you'll have to take a leap of faith and trust the car, because the steering wheel tells very little of what the front tyres are doing. 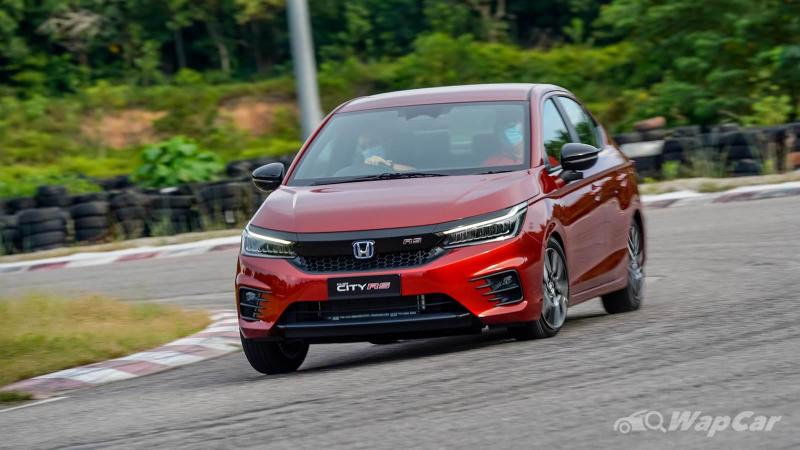 The new 2020 Honda City RS' steering feels better weighted and while we won't say it's as communicative as the Toyota Vios'  (still the best steering in its class), at least now you can better gauge what the front tyres are doing.

The new car also feels more mature, more planted. Where the previous City Hybrid will rotate its rear quite easily if you brake late, shift the weight balance to the front wheels before pitching it into a corner – fun in a tight track but absolutely irrelevant to 99.9 percent of buyers - the 2020 Honda City RS is less playful. It has a more mature character.

Previously, the cabin's sides and roof were welded together at the same welding station on the assembly line but with the all-new 2020 Honda City, there's now a two-step process, one for the inner frame and another for the outer frame, for a stronger frame. Honda says front torsional rigidity is now up by 20.4 percent while weight has been reduced by 4.3 kg. 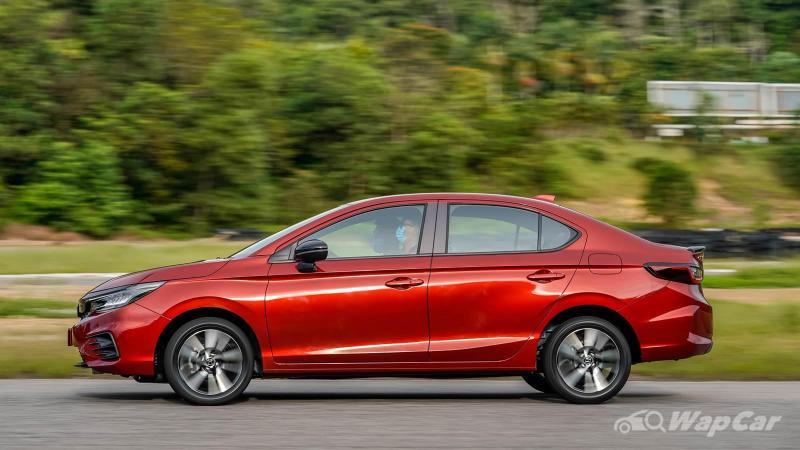 MIMC circuit's straights are relatively short but based on our short time in the car, the 2020 Honda City RS is noticeably quieter (to be verified with our test instruments when we get the car for a more in-depth review), better than even the current class-leader Toyota Vios – 69 dB at 110 km/h versus old Honda City Hybrid's 70 dB. Keep in mind that we did our own measurements in an uncontrolled environment.

At full pelt pedal to the metal acceleration, vibrations on the pedal are noticeably less than the old City Hybrid, and Honda claims a 33 percent reduction in noise, vibration and harshness – thanks to among many other measures, noise reducing polymers injected into cavities along the floorboard's side rails (between the engine bulkhead and base of the B-pillar).

The RS variant, being a hybrid and with less engine noise to muffle out road and tyre noise, gets additional insulation behind the bulkhead too.

On a flat circuit, it's rather hard to gauge the suspension's comfort but as far as body control is concerned, it's taut and makes for a confidence-inspiring drive.

Specifications have yet to be confirmed but six airbags for the RS variant is a given and we know it comes with Honda Sensing advanced driving assistance system (ADAS), which is a more complete suite of features compared to the Nissan Almera's Intelligent Mobility package, nevermind the Toyota Vios.

Although the City is a lower, almost entry-range model, its Honda Sensing is in some ways actually better than the ones fitted in the more expensive Civic, Accord, and CR-V.

And because it's a newer product, the 2020 Honda City RS benefits from the latest development for its monocular camera, which now has a wider operating angle.

This means that the Adaptive Cruise Control (ACC) is now more sensitive to a wider area, and will be able to respond faster to vehicles approaching from very extreme angles. The Forward Collision Warning and Collision Mitigation Braking System have been upgraded and is now capable of detecting cyclists, and it also works when the car is turning into a junction.

However unlike the Civic, Accord and CR-V, the 2020 Honda City RS' ACC doesn't come with Low Speed Follow (LSF), which means that it won't work in stop-go traffic situations (despite having electric parking brake, which in theory allows for LSF). It's operable from 30 km/h onwards. Below that, the driver will be prompted to take over. 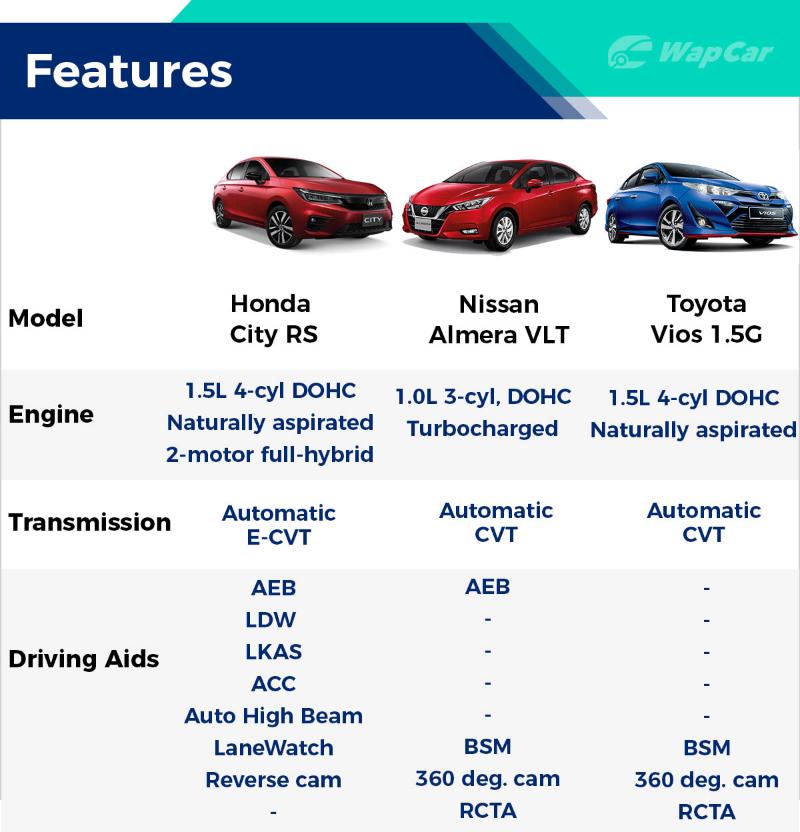 Like all Honda cars, the Lane Keeping Assist (LKA) function is remarkably smooth and is not too obstructive. Prompts were gentle rather than triggering prematurely to yank the steering wheel. Along the short straight we tried the Road Departure Mitigation (RDM) function. 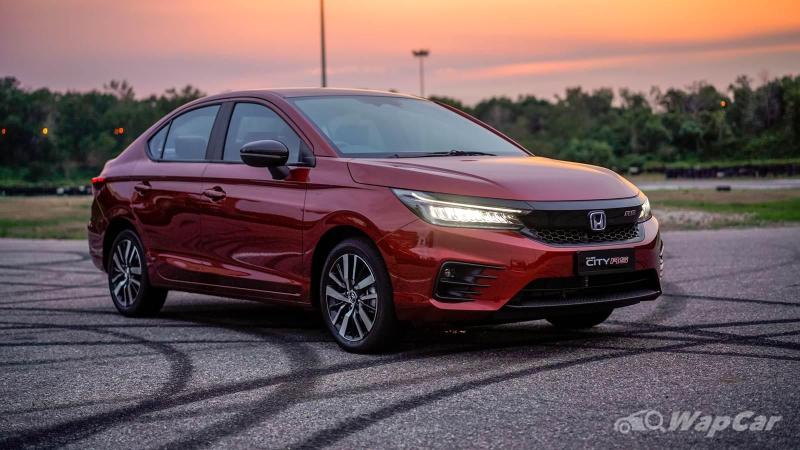 As mentioned earlier, we can only share with you interior details after the car is launched, but if you're comparing this against the (expected) similarly-priced Proton X50, what we can tell you is that you'll be surprised how well a lower riding (presumably more comfortable), lighter and more fuel efficient sedan that offers the security and convenience of a large lockable boot that you can still open when reverse parked against another car/wall, can be a better choice against an SUV. 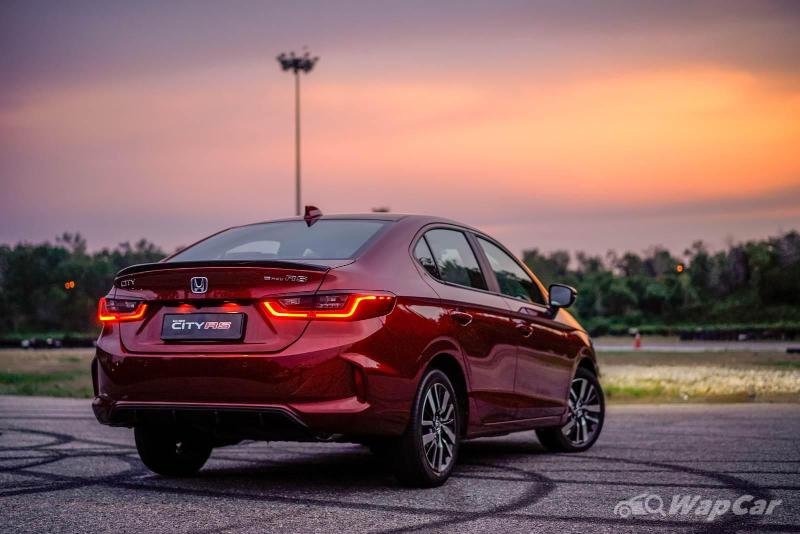 Against the Nissan Almera Turbo, the 2020 Honda City RS has little to be worried about, at least as far product attributes are concerned (prices for Almera have yet to be announced). Against regular non-hybrid variants of the 2020 Honda City however, the Almera may have an upper hand. 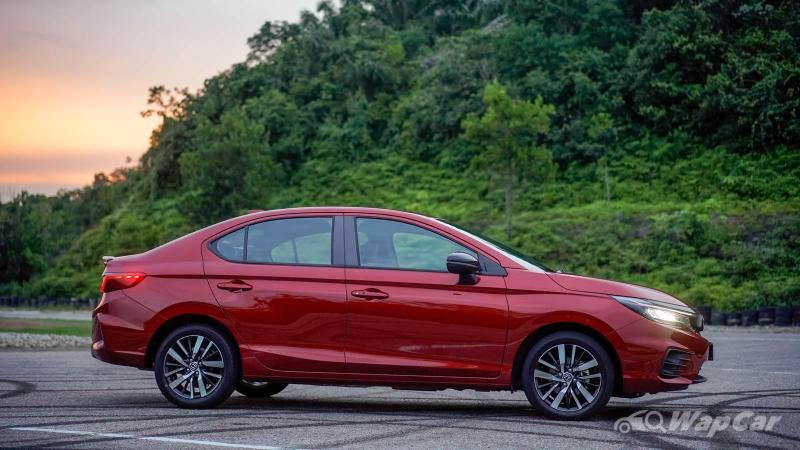 While we can't show you the local 2020 Honda City RS' interior, we can however, show you our video of the Thailand specs Honda City RS' (non-hybrid) interior. This was shot in November 2019 so ignore the speculations on powertrain details.