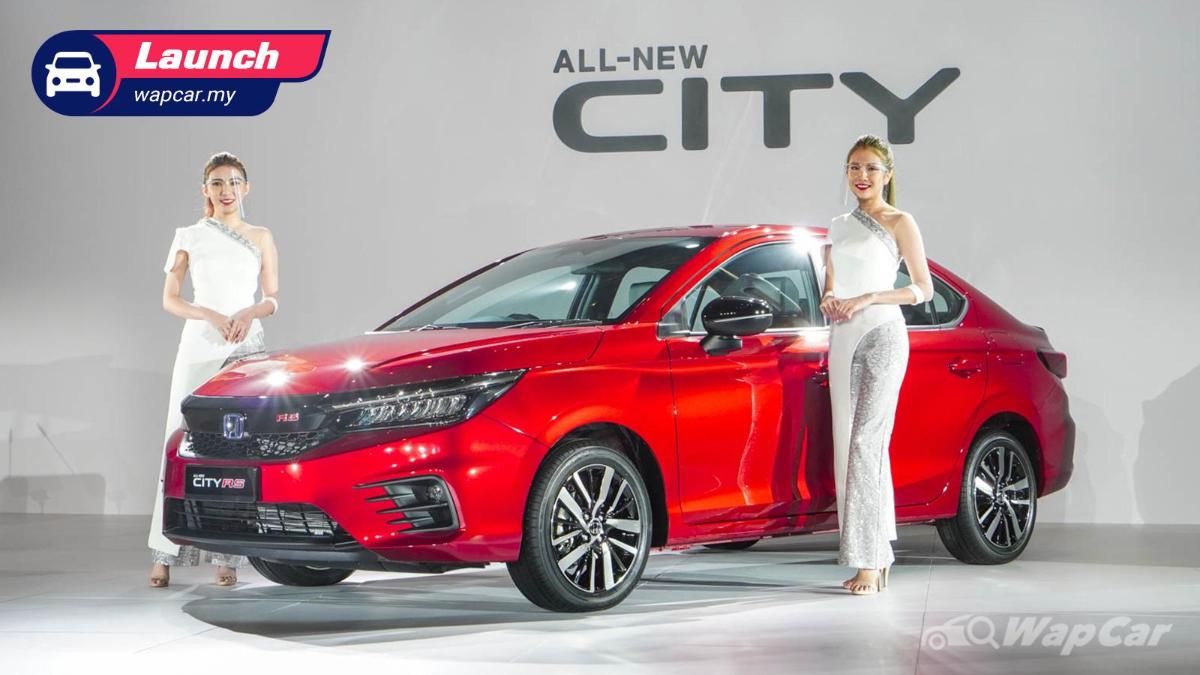 The all-new 2020 Honda City has just been launched in Malaysia. Three variants of the locally-assembled (CKD) B-segment Honda City are available at launch - the S, E and V. Prices for the City starts at RM 74,191, valid until 31-December 2020.

The starting price is actually lower than the RM 75,295 (without SST) of the previous generation model.

The previously seen range-topping RS variant will be introduced in January 2021.

Variants of the 2020 Honda City 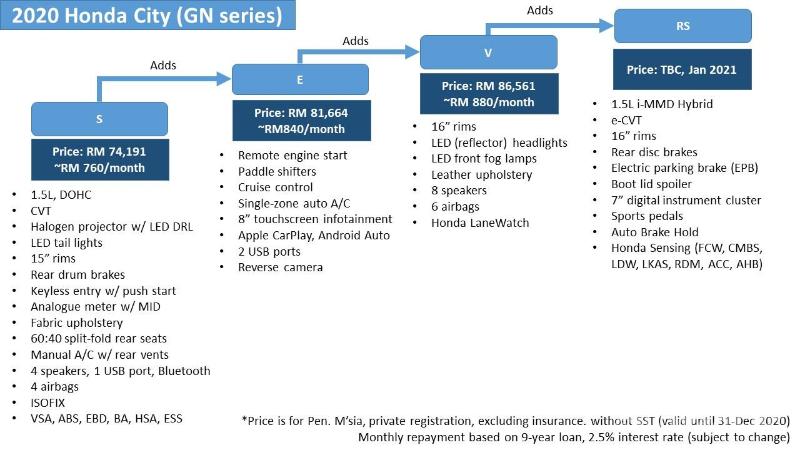 Prices will be revised upwards after 31-Dec 2020 with the resumption of SST. 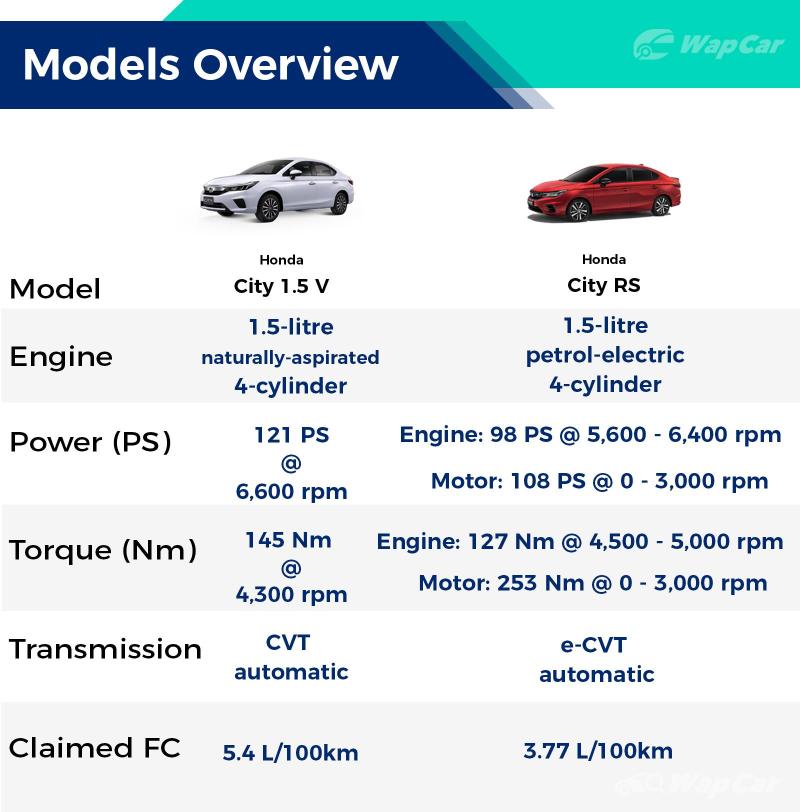 The previous model's SOHC engine has been replaced by a new DOHC one. Meanwhile, claimed 0-100 km/h times for the S and E variants are 10.2 seconds, while the V clocks 10.4 seconds.

The two-motor i-MMD hybrid RS only needs 9.9 seconds to do the same. Bear in mind that the RS has a 1.5-litre, naturally-aspirated Atkinson-cycle engine to complement the hybrid system.

Top speed is a claimed 196 km/h for the pure-petrol variants while the petrol-electric hybrid RS tops out at 173 km/h. 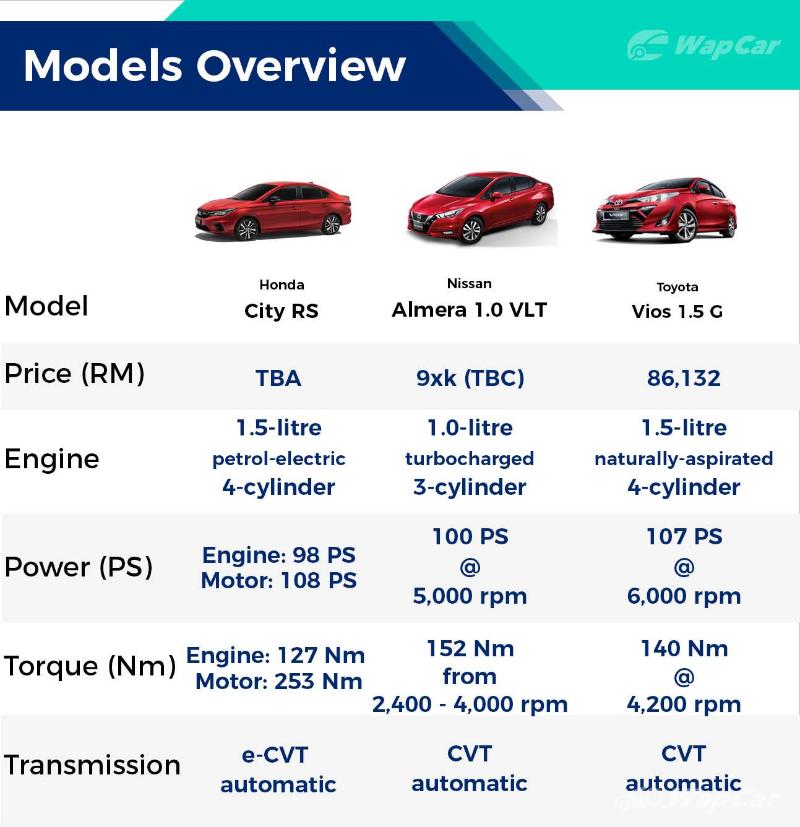 This is how the range-topping City RS will fare up against its competitors, in terms of powertrain. Do note that power figures for the engine and motor cannot be summed simply because they peak at different rotational speeds. 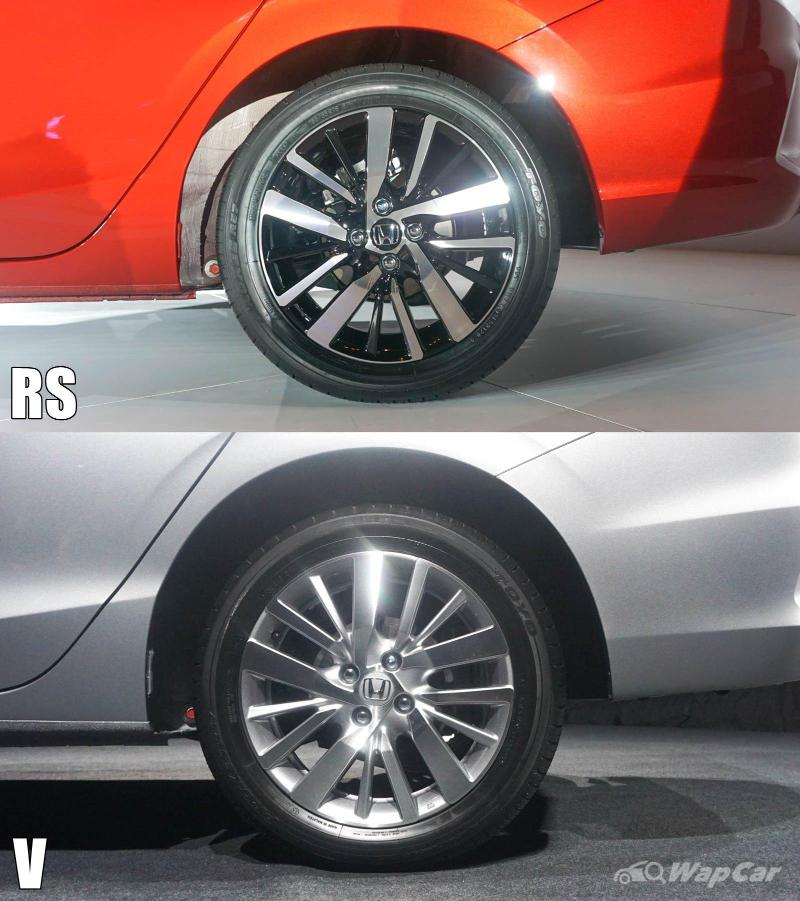 S, E and V variants will have front disc brakes and rear drum brakes. All-round disc brakes are available only on the RS variant - as is electronic parking brake (EPB). 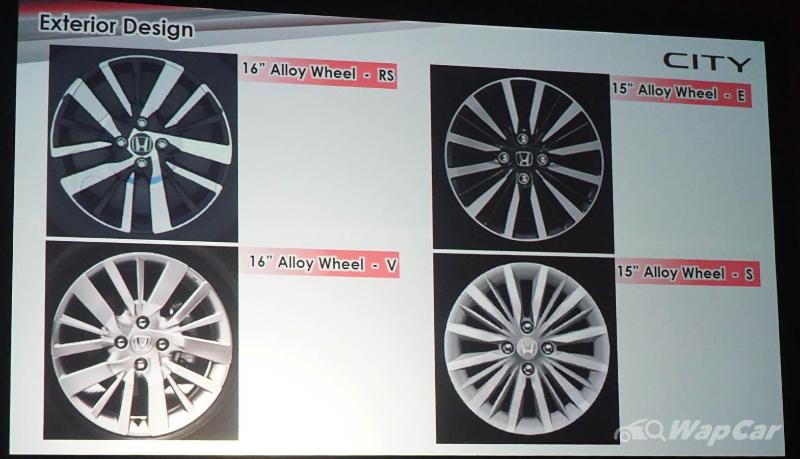 Meanwhile, the S and E variants are shod with 15-inch wheels, while the higher-end V and RS variants get 16-inch units.

That said, the S, E and V get 15-inch spares, while it’s a temporary repair kit for RS owners.

Dimensions of the 2020 Honda City

Much like the Nissan Almera, the City also looks bigger than its segment suggests. Here's how the new City measures:

Of course, numbers without context are nothing, so this is how the City stacks up against rivals: 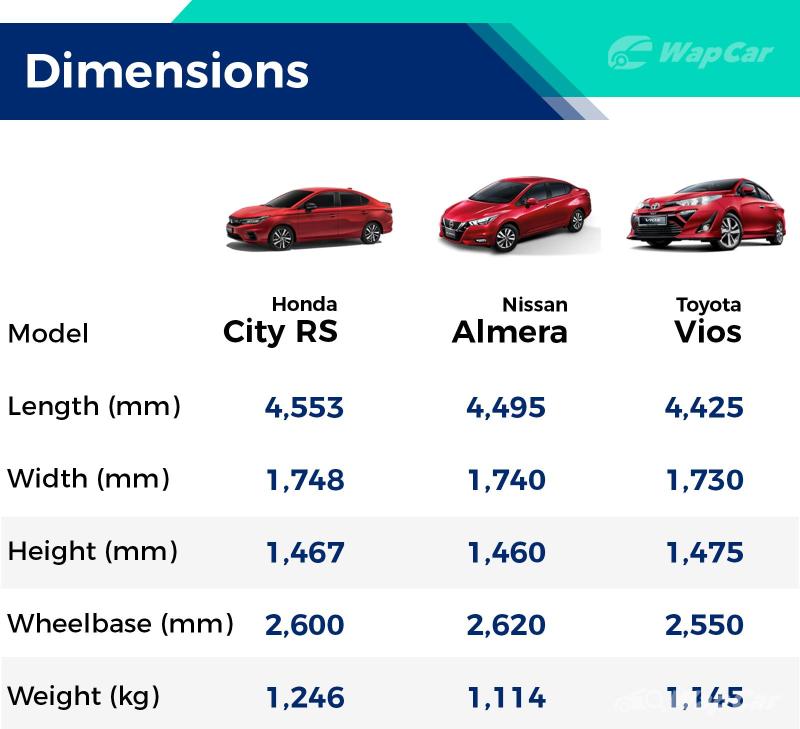 Exterior of the 2020 Honda City 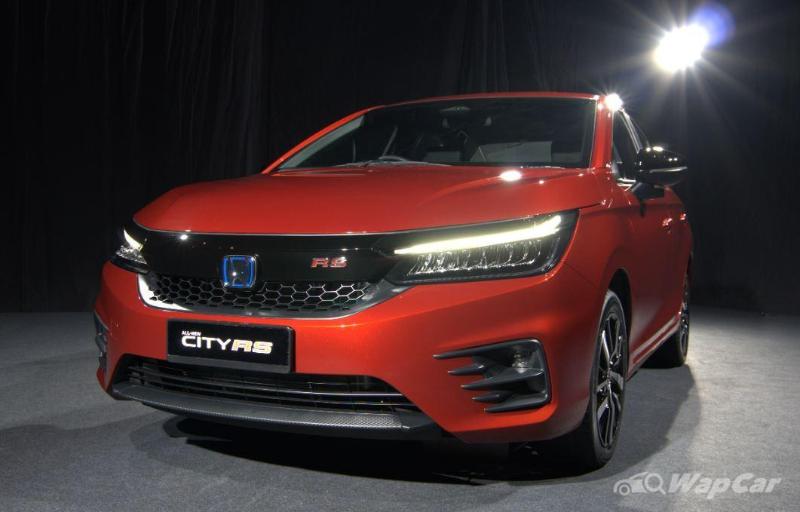 Other than the powertrain, the looks are also different. As expected, the S and E variants get projector halogens while lacking foglamps, the bootlid spoiler (RS-exclusive) and other visual additions. 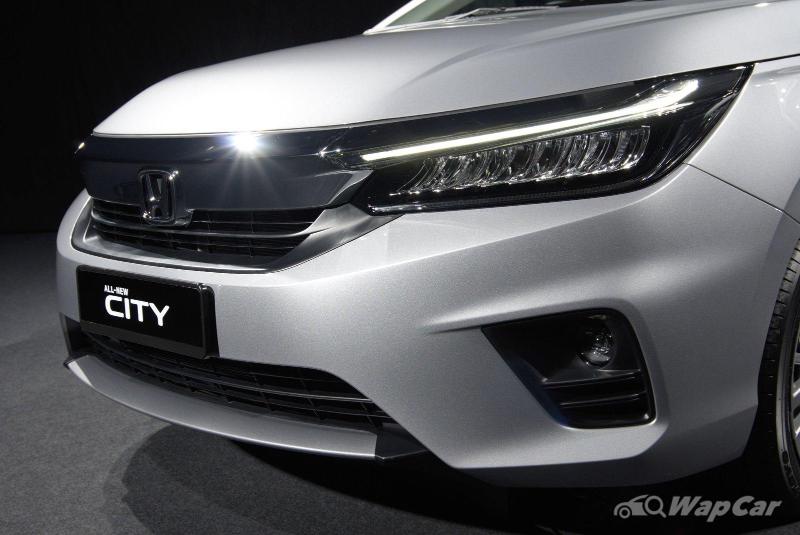 Side mirrors with indicators are standard fare, as with LED DRLs and shark fin antenna. 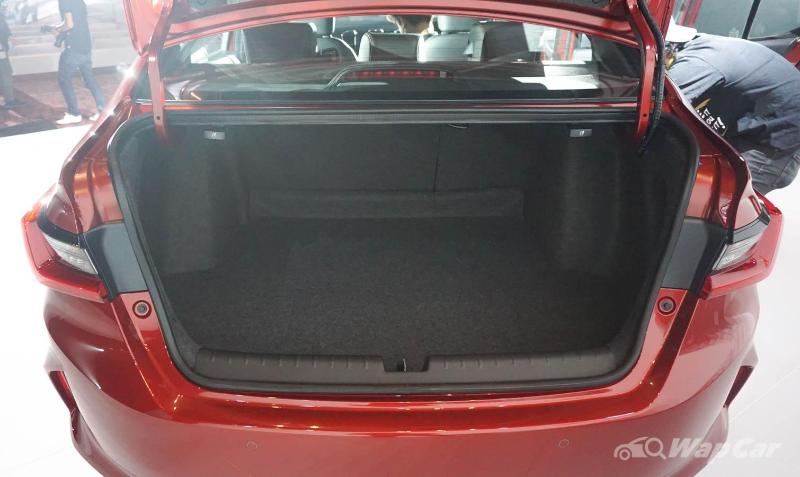 Bootspace for the S, E and V variants is rated at 519 litres, while the RS has a smaller boot (409 litres) presumably due to the high voltage battery pack. 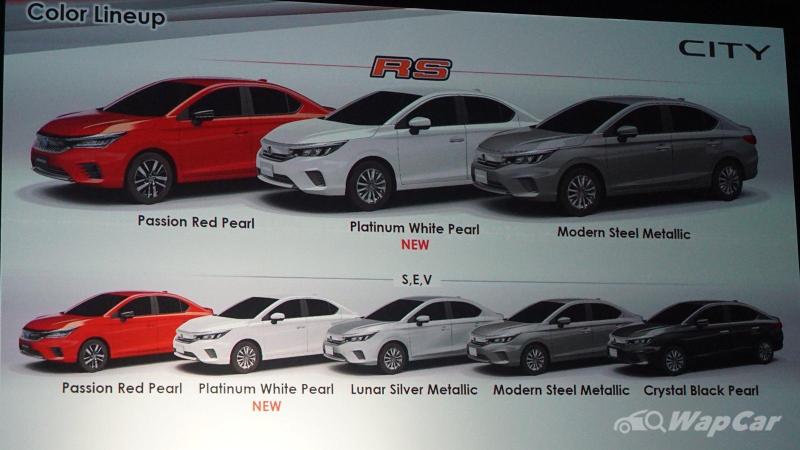 Interior of the 2020 Honda City

S and E variants make do with a single-tone interior, while the dual-tone ivory/black colours are available for the V variant. RS gets red detailing.

Paddle shifters are only available on the E and V variants. The RS also has paddles behind the steering wheel, but it's not for the gears, which the RS doesn't have anyway. Instead, the RS' paddles are 'deceleration selector pedals' which adjusts the intensity of the regenerative braking. 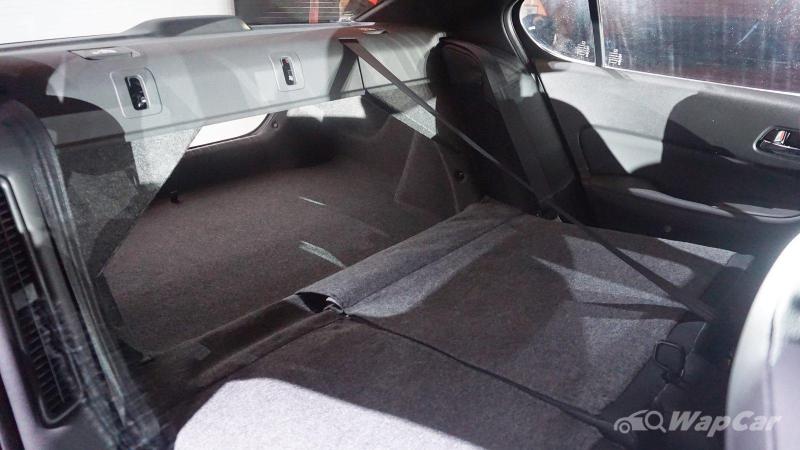 Every variant gets rear-air conditioning vents with two 12V power outlets. Adding to the list of kit that our City does better than the Thai-spec ones are 60:40 split-fold seats.

Safety features of the 2020 Honda City

The S and E variants get 4 airbags while there's 6 for V and RS variants. Other than that, here's what's standard across every variant: 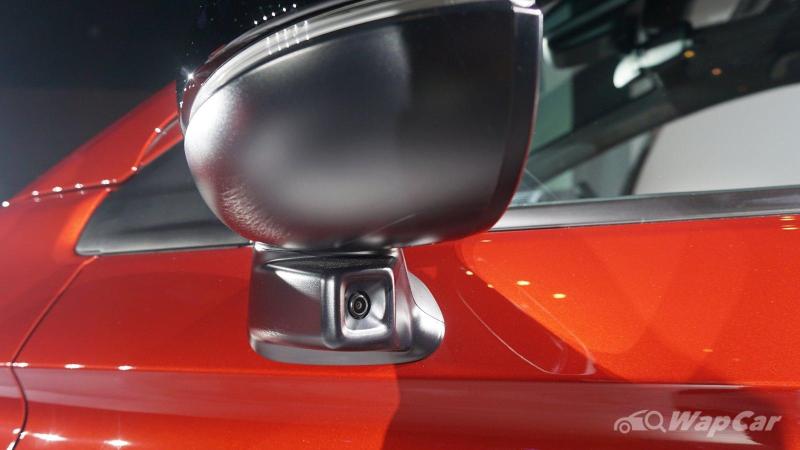 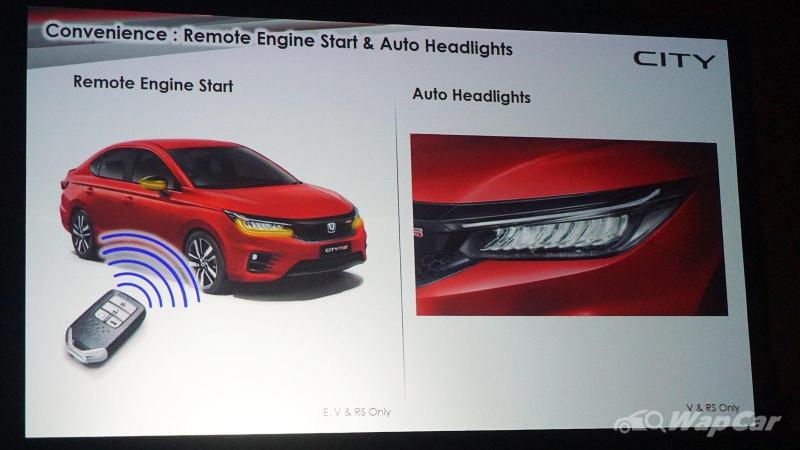 That said, Honda Sensing is only available on the RS variant. These are the functions included: 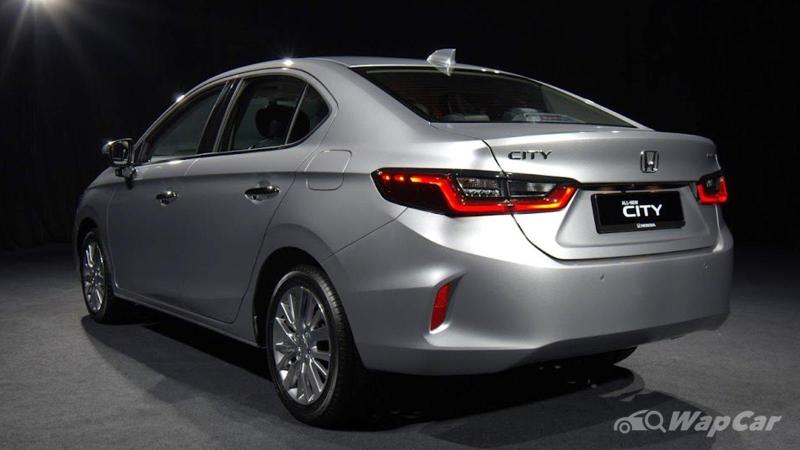 The Honda City will be bundled with 5 years unlimited mileage warranty and up to 5 times free labour service within 5 years/100,000 km.

I want to know more!

Meanwhile, we have taken the yet-to-be-launched City RS out for a spin very recently, which you can read here. And as usual, a lot of other info can be found on the model page. 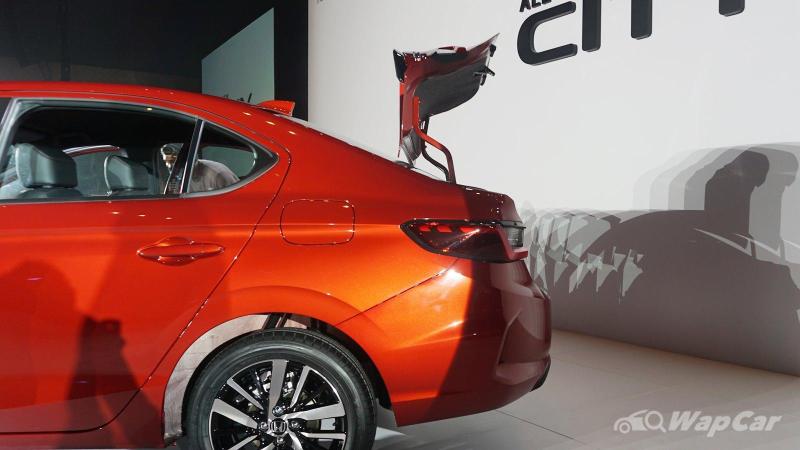 And if you really want to get up close and personal with would-be fellow owners or just to make new like-minded friends, hop on to our Wapcar Forum or join our WhatsApp group.