HomeNewsPros and Cons: Almost perfect, the Toyota Corolla Cross Hybrid is why good is good enough

Pros and Cons: Almost perfect, the Toyota Corolla Cross Hybrid is why good is good enough 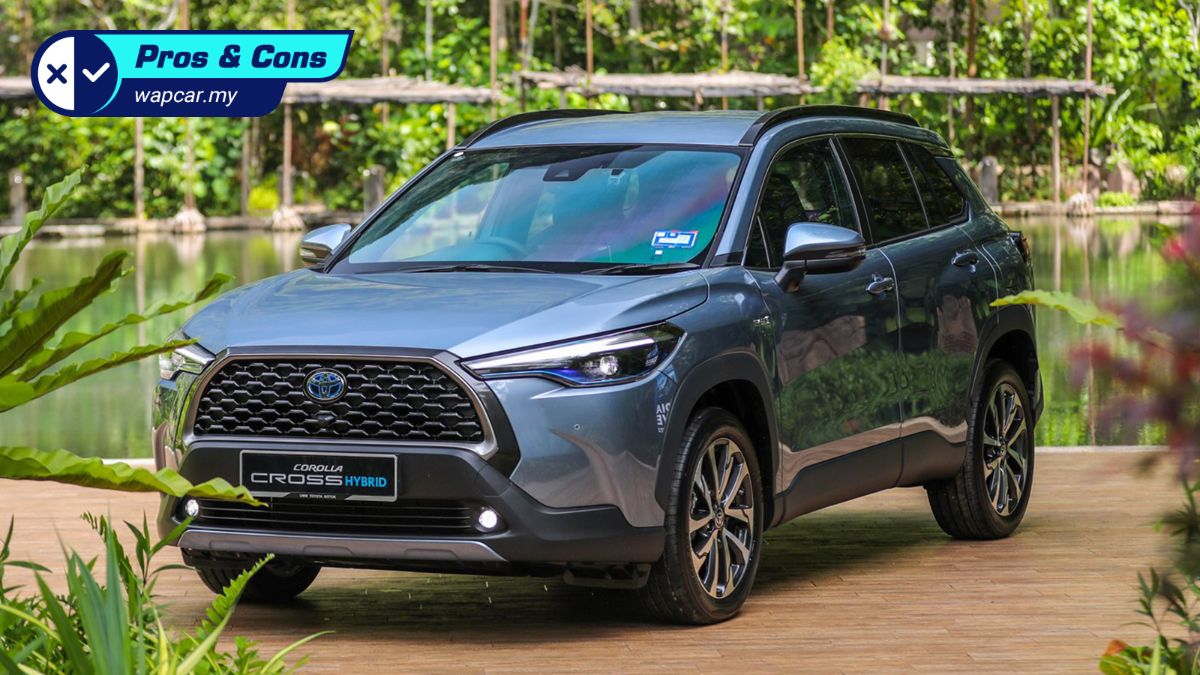 We will say it up front, the locally-assembled (CKD) 2022 Toyota Corolla Cross Hybrid is the best value-for-money family SUV you can buy right now. 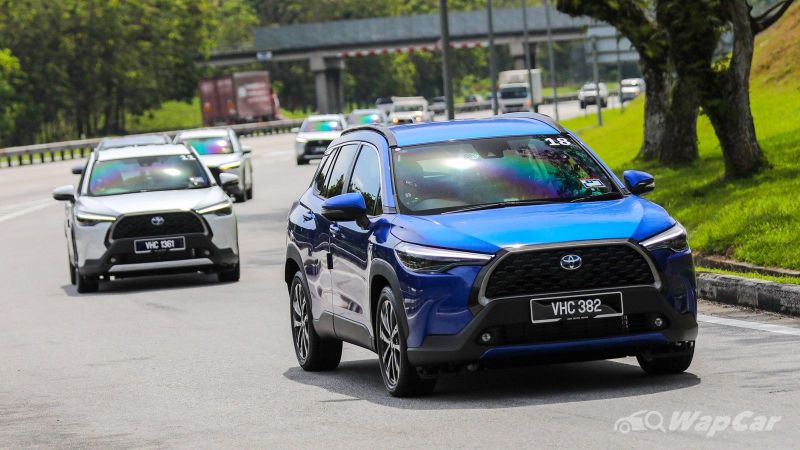 We’ve yet to do a full in-depth review of the Corolla Cross Hybrid, at least not with our usual instrumented testing methods. However we’ve covered sufficient distance in the Toyota to form some reasonably firm impressions so here’s a summary of what we like, and what we don’t with the Toyota Corolla Cross Hybrid. 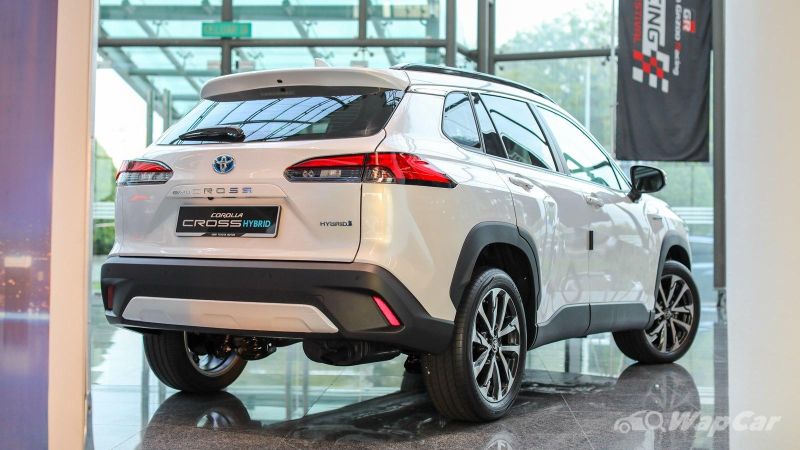 The asking price for the Hybrid is RM 7,550 more than the regular combustion engine 1.8V variant.

This being a Toyota, of course it’s a full-hybrid (as opposed to a mild-hybrid), meaning that it can accelerate from stand-still in electric power alone, and the air-conditioning stays cool regardless of whether the engine is spinning or not.

But ‘people’ say hybrids are unreliable?

Toyota has been building hybrids since 1997 and their hybrids are built very differently from a German hybrid so ignore whatever horror stories you've heard.

If you are concerned about reliability and running cost, know that the Toyota Prius and Camry Hybrid are the preferred taxi and Uber cars in many parts of the world, and they are among the world’s most reliable cars, regardless of whether it’s compared to hybrids or not. 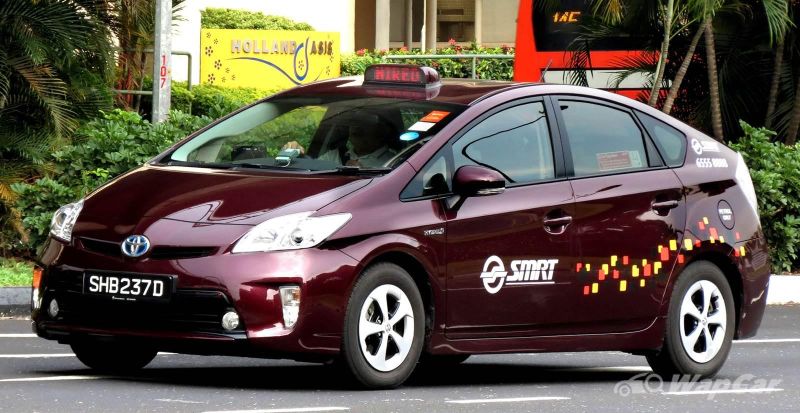 In neighbouring Singapore, there are over 5,400 units of the latest generation Toyota Prius, which shares the same powertrain as the Corolla Cross Hybrid. Over 400 units of those cars are running as Grab cars. The average problem-free mileage of these cars is over 150,000 km.

But why listen to gentle driving Singapore? Ask Cambodian taxi drivers in Phnom Penh why they love Toyota hybrids so much.

Closer to home, there are plenty of over 10 years old Prius and Prius c that are still running strong in Malaysia. The WapCar team ourselves has a 10 years old, 150,000 km Prius that can probably still go on for another 10 years.

How much to replace the Toyota Corolla Cross Hybrid's battery? Inverter?

If you have to know, the cost to replace the high voltage battery is around RM 8,500, inverter is RM 6,200, power management control unit is RM 1,800 – all of which are irrelevant to most buyers because the UMW Toyota Motor offers up to 10 years unlimited mileage warranty (8+2 years, the latter a RM 2,950 option) for the hybrid components. 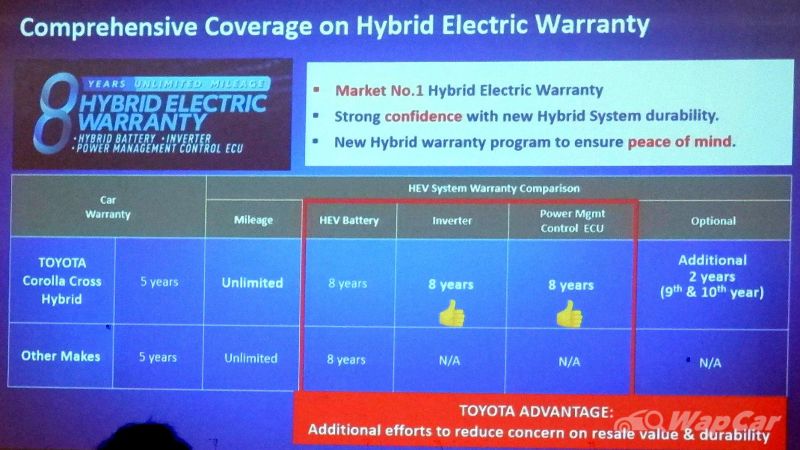 By the time the warranty expires, prices of these components would’ve gone down further. 10 years ago, the price of an inverter was nearly RM 15k, while the high voltage battery was about RM 12k.

The Toyota Corolla Cross offers a comfortable ride with front seats that are more supportive than the Mercedes-Benz GLC, but what do we know right? Because WapCar is probably paid handsomely by Toyota to say good things about them right? So go try it for yourself. 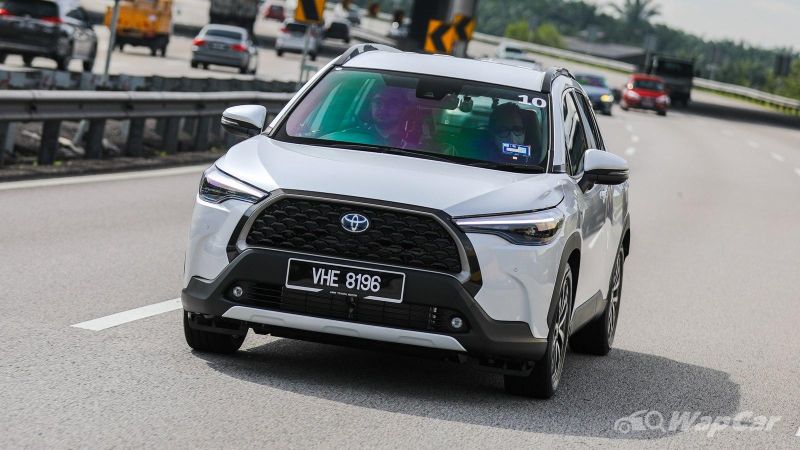 We have yet to do an instrumented cabin noise test, but the subjective experience is well above our expectation for a car of this price range.

The ride is supple and the seats are way more comfortable than what’s offered in cars from several classes higher. Before driving the Corolla Cross Hybrid, yours truly came from a Honda Accord 1.5 TC-P, and the difference in lower thigh support is like day and night.

We drove the Corolla Cross Hybrid non-stop from Penang to Shah Alam, with no driver change, not even to stop for petrol (this is a hybrid, remember?), completing the journey in 4.5 hours (want to try doing the same in an EV?).

By the way, we recorded an average fuel consumption of 5.7-litre/100 km (trip computer reading) after 371 km of driving, including time spent in peak hour Penang island and main bridge traffic, with no Prius-driver hyper-miling nonsense.

How does it compare against a regular Corolla Cross 1.8V and 1.8G?

The Hybrid is way more comfortable. It’s quieter and smoother. In traffic, you inch along in electric power, so there's no engine noise or vibration. 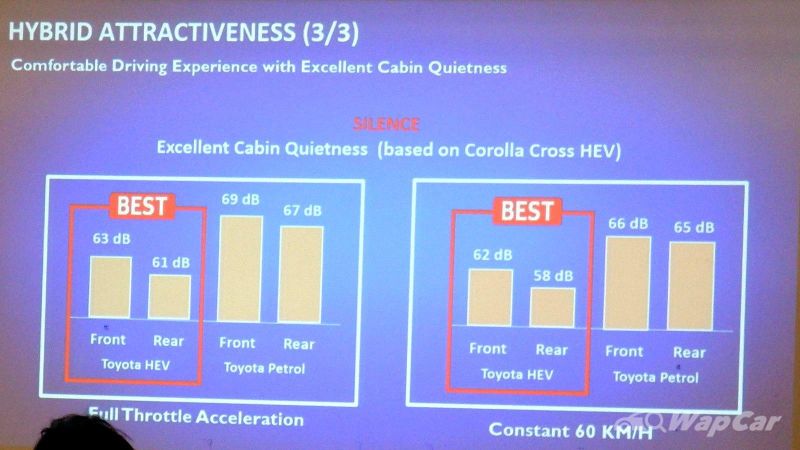 When you need to accelerate for overtakings, the Hybrid’s power delivery is a lot more immediate, whereas the 1.8G / 1.8V can feel a tad lethargic when overtaking uphill. 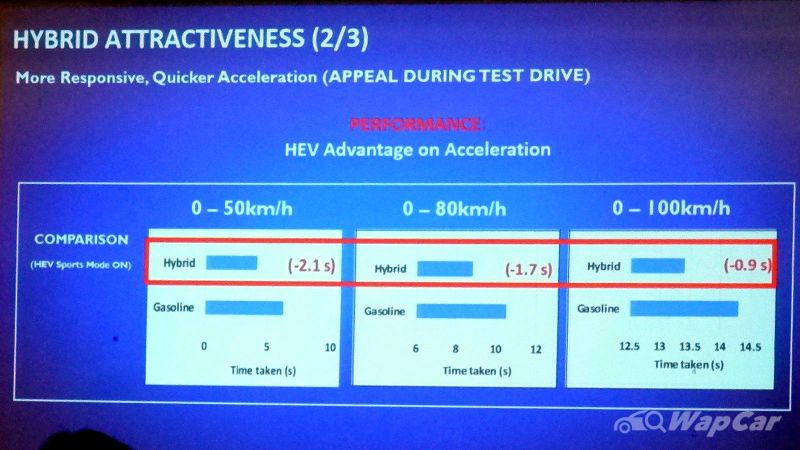 The Hybrid is certainly a lot faster than the brochure’s 122 PS combined output suggests, which is less than the 1.8V / 1.8G's 139 PS. It's hard to explain this to first-time hybrid buyers, but you really can't judge a hybrid car's performance based on traditional on-paper numbers.

Explaining the technicalities of Toyota’s TNGA platform it will take too long but all you need to know as a consumer is TNGA equals excellent ride comfort, world-class safety, and motion sickness-free handling. 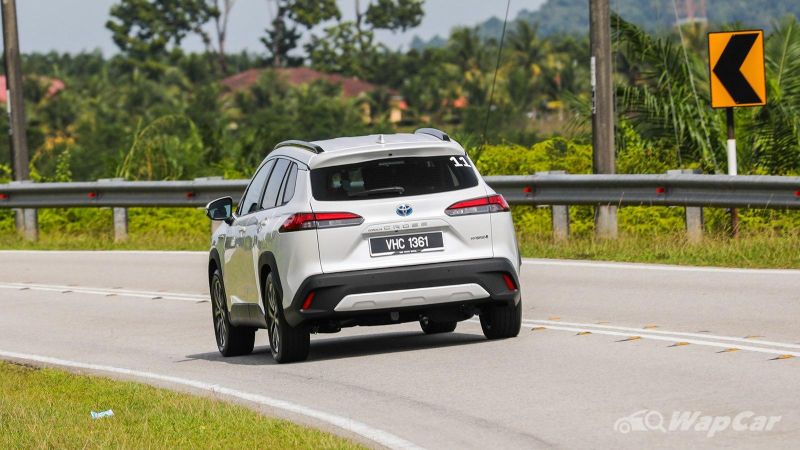 The word ‘handling’ is frequently mentioned by many but few actually know what it means, often erroneously equating it to ability to corner at high speeds.

No, good handling simply means no delay between a driver’s steering input and vehicle’s actual line of travel. On a deeper level, it could also mean the lack of delay in the driver / occupants feeling the change in travel direction versus the car. 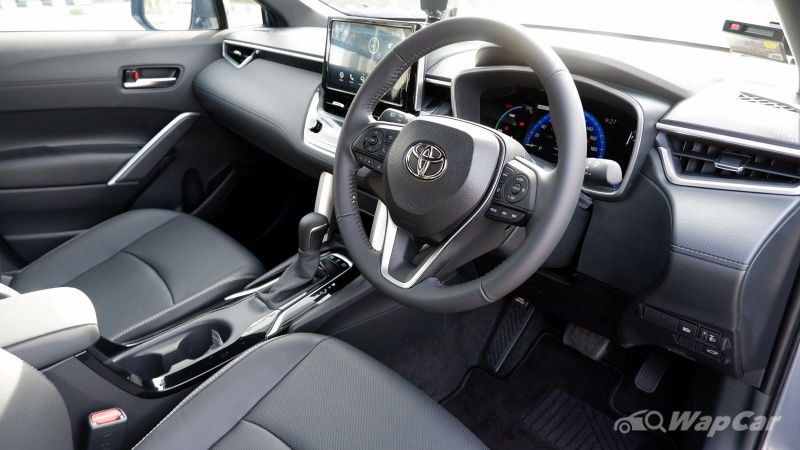 Of course, it takes a smooth driver with clean steering inputs to actually feel the difference.

The roads around Batu Ferringhi are tight and twisty, and SUVs with their inherently poorer handling due to their taller ride height and heavier weight, is the worst type of car to drive on such roads. 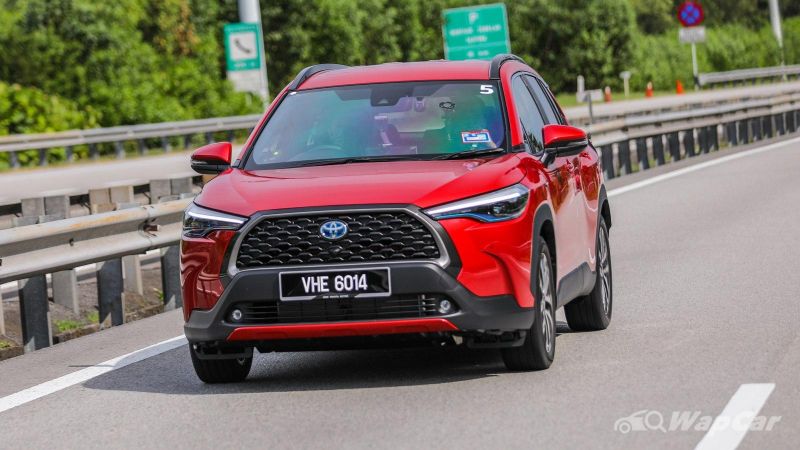 Compared to the regular variants, the Hybrid only weighed 25 kg more.

Compared to the Toyota C-HR that it replaces, the Corolla Cross’ front and rear visibility is very good. Its size is just nice for Malaysian cities. Parking is a lot easier too, even without using the 360-degree camera.

An added nice touch is the Reverse gear-linked side mirror, which tilts down to show the kerb. It’s not mentioned in the brochure but it’s very useful and is not common on cars from this price range.

Just move the side mirror adjustment knob either to left- or right-side before shifting into Reverse to tilt the corresponding side’s wing mirror. 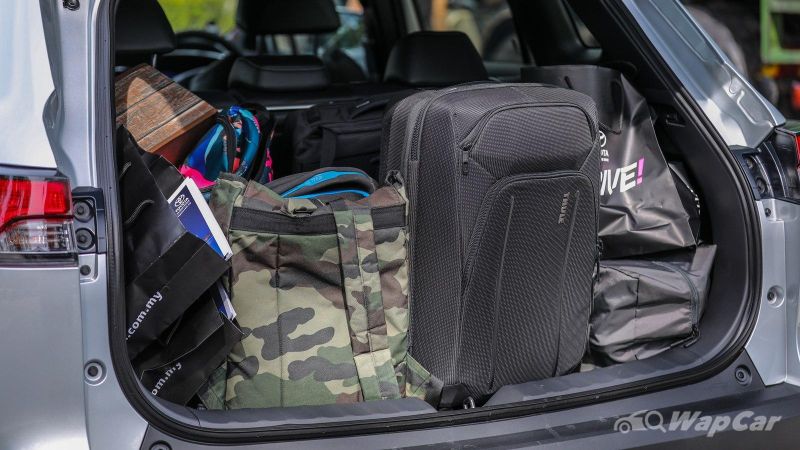 The 440-litre boot space is one of the biggest in its class, but numbers only tell part of the story. The Corolla Cross Hybrid’ power-operated tailgate opening is wide and low enough for easy loading. Very practical.

There’s a contactless, kick-gesture activated automatic tailgate opening feature too but the system’s detection range is just too narrow so it’s more of a novelty rather than a feature that you will use often enough. 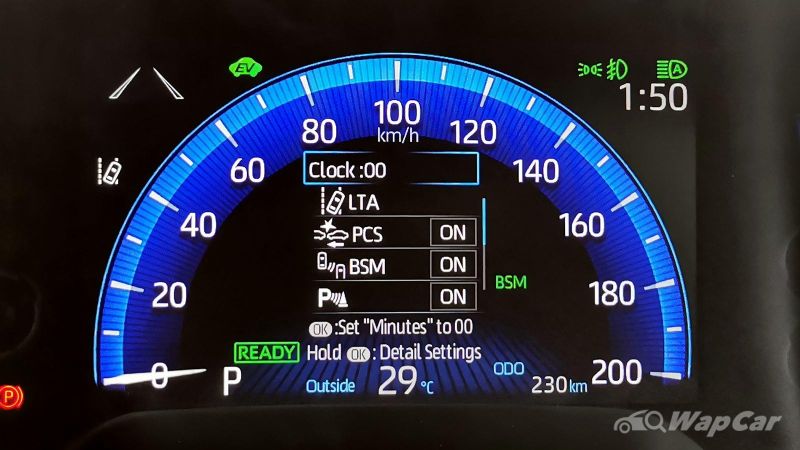 It’s difficult to find another SUV that offers the same package. What about the Proton X70 you ask? If you can get your hands on one, then yes it’s a valid comparison. Else the comparison is moot. 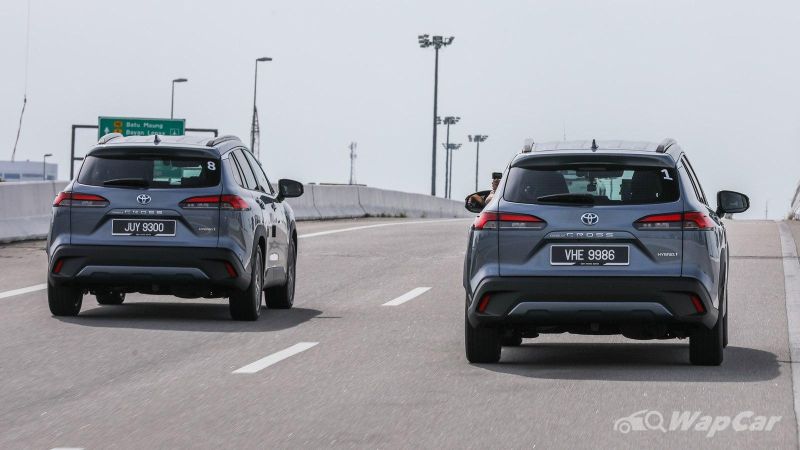 Factor in Toyota’s almost guaranteed peace-of-mind ownership experience and benchmark-setting after-sales service that few brands will dare to say they can do better, the Toyota Corolla Cross is the default recommended choice for anyone looking for an SUV.

Even if you are apprehensive of hybrids, you can still buy the 1.8V and enjoy more or less the same benefits.

#1 Cons: TSS is not as good as Honda Sensing

On paper, the Corolla Cross’ TSS matches Honda Sensing’s suite. However in real-world use, TSS is noticeably less refined than Honda Sensing, which you can be sure will be included in the next generation 2022 Honda HR-V.

On highway drives, the Corolla Cross’ adaptive cruise control (Toyota calls it DRCC) brakes too hard and too late, and when the car ahead pulls away or moves aside, it takes too long to respond to accelerate back to its preset speed. Honda Sensing-equipped models on the other hand, works so much smoother.

Toyota describes its DRCC feature as an all-speed type, implying that it can be used in traffic jams, and brake the car to a complete stop.

What they didn’t say is that the Corolla Cross’ DRCC will cancel after that, and the driver will be prompted to step on the brakes. If no response is received, the brakes will be released after 3 seconds. You definitely don’t want that to happen.

In the same situation, Honda Sensing’s Low Speed Follow can resume at the touch of a button.

Why the difference? The Corolla Cross doesn’t have an electric parking brake (EPB), which is necessary to achieve real Stop&Go function for the ACC.

User interface for the TSS is also not as intuitive for Honda Sensing’s, whose one-touch ‘Main’ button on the steering wheel cancels/enables Lane Keeping Assist and ACC, the two things you will enable/disable most often.

TSS’ display icons are also spread out between the centre and upper-left sections of the instrument panel, making it difficult for quick glance status checks, as opposed to Honda’s, which are clustered at the centre.

Infotainment is a weak point for many Toyota models and the Corolla Cross is no different. We don’t get the international market models’ floating panel display, but a 2-DIN unit that looks like an old-school CRT TV. 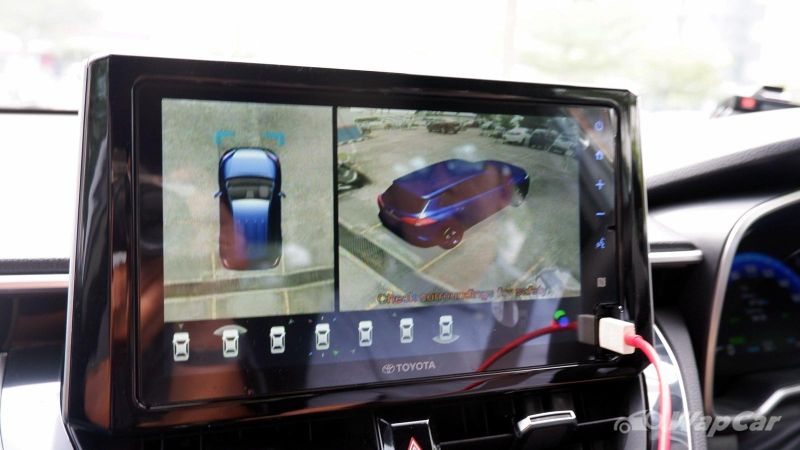 Logically, you would expect similar category functions to be clustered together.

The Corolla Cross’ cabin is reasonably spacious enough for its class but storage space for smaller items is lacking.

The centre console box is only enough for a sunglass case and little else. Don’t even think of keeping your Smart Tag together with you and your other half's sunglass cases. 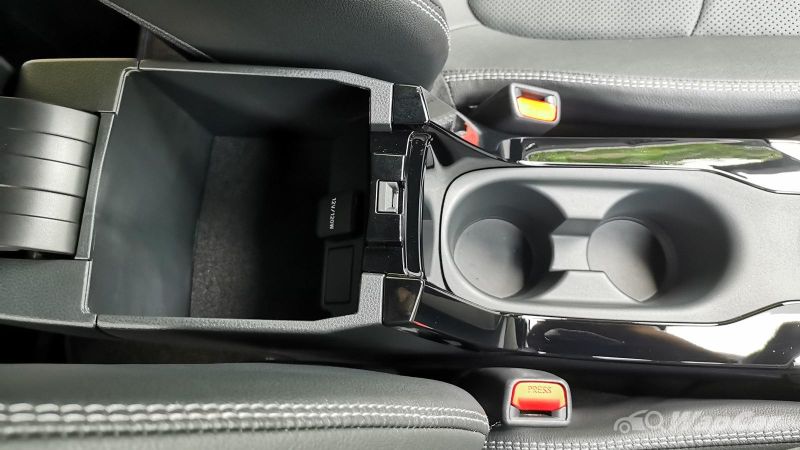 To be fair, you don’t get that much storage space in a Subaru XV either. It’s just that the Honda HR-V, even the outgoing old model, with its adjustable depth cup holders that also doubles as a storage box, is amazingly competent in this aspect.

This might come as a surprise, but the Toyota Corolla Cross Hybrid can’t go that far with a single tank of fuel, just around 600 - 650 km, versus the ZVW30 third generation Prius, the last Prius sold in Malaysia, which could easily do 800 km.

That’s because the Corolla Cross Hybrid has a very small 36-litre fuel tank, which is 11 litres less than the regular Corolla Cross 1.8V / 1.8G’s 47-litre tank, and 9 litres smaller than the Prius' 45-litre tank.

To put things in context, 36 litres is the kind of fuel tank size for a Perodua Myvi.

Perhaps Toyota kept the fuel tank small to keep the kerb weight low, or to make space for the high voltage battery, since its claimed fuel consumption of 4.3-litre/100 km is already almost 50 percent better than the regular Corolla Cross.

Overall, the negatives of the Corolla Cross Hybrid are very minor. Its comfort and smooth driving character alone are enough reasons to buy one.

For its asking price, it’s hard to find a better product that does more, and more importantly, can still match Toyota’s peace of mind ownership experience.

Is it a better buy than the regular Corolla Cross 1.8V and 1.8G? Definitely. 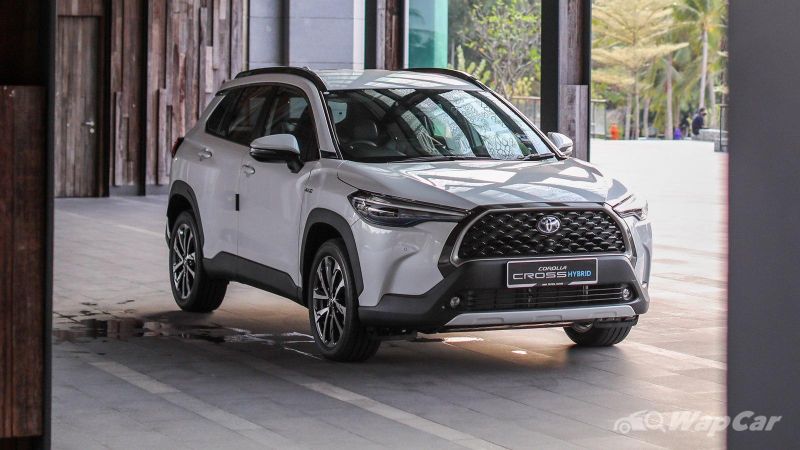 But of course, many are still apprehensive about hybrids, and that’s fine. If the more traditional 1.8V and 1.8G variants give you better peace of mind, go ahead, you can’t go wrong with those either.