** This article is the personal experience of a 2019 Toyota Camry 2.5V owner and does not necessarily reflect the views of WapCar. 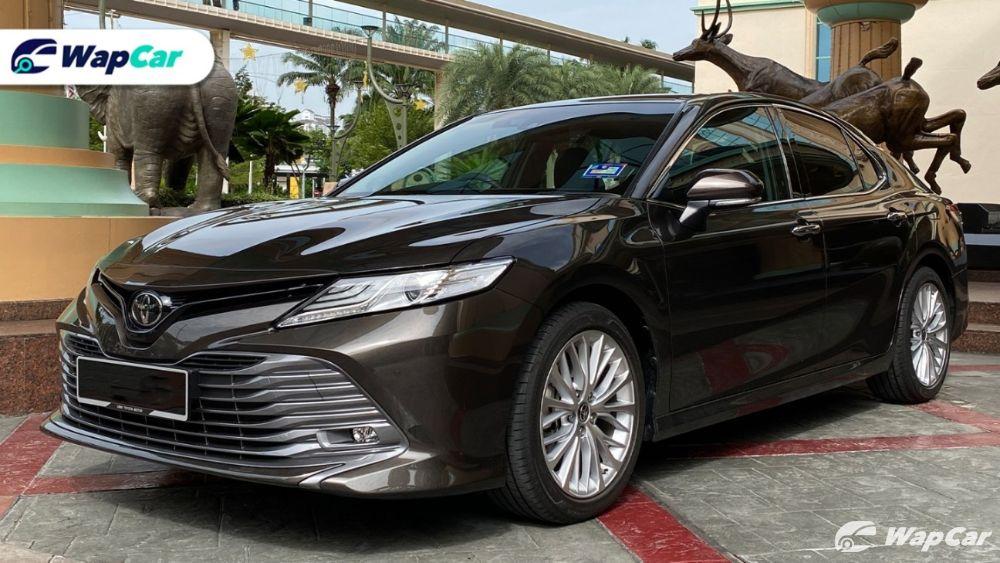 There’s no such thing as the perfect car. What we buy is very much a representation of what we want or need. Nevertheless, the general criteria in car selection revolves around price, safety, performance, handling, reliability and both short and long term maintenance. Striking a balance of which comes first is always a headache and in most pre-purchase consideration, many are torn between the whispers of the head and the heart.

I was extremely fortunate to survive being hit by a falling tree while cruising at 70km/h along the Federal Highway although it left me with an unfortunate decision to part ways with my trusty workhorse, a 2004 Toyota Vios. A 2010 Corolla Altis soldiers on as my Missus’ commute with stupendous reliability while a manual 2017 Subaru BRZ allows for some much needed rare and macho cog swapping while learning to go sideways. 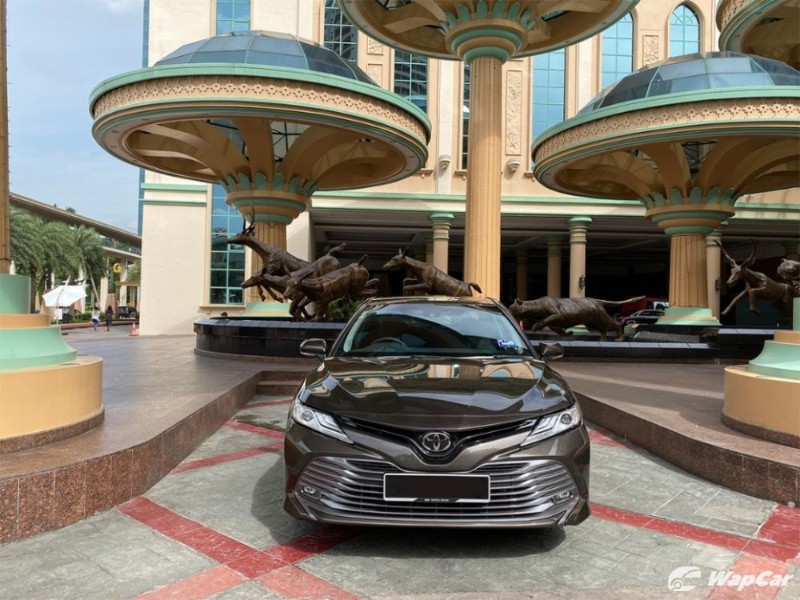 After much thought, this 8th generation Toyota Camry 2.5V got the nod. It wasn’t an easy decision for there were 2 drawbacks with UMW’s packaging of this car. Priced slightly below RM200,000, this Camry is expensive when one could get discounted or pre-registered Mercedes Benz C200s or C250s for more or less that price range. Then there’s the 10-year-old drivetrain, made up of the old and trusty 2AR-FE, mated to a 6-speed automatic gearbox. 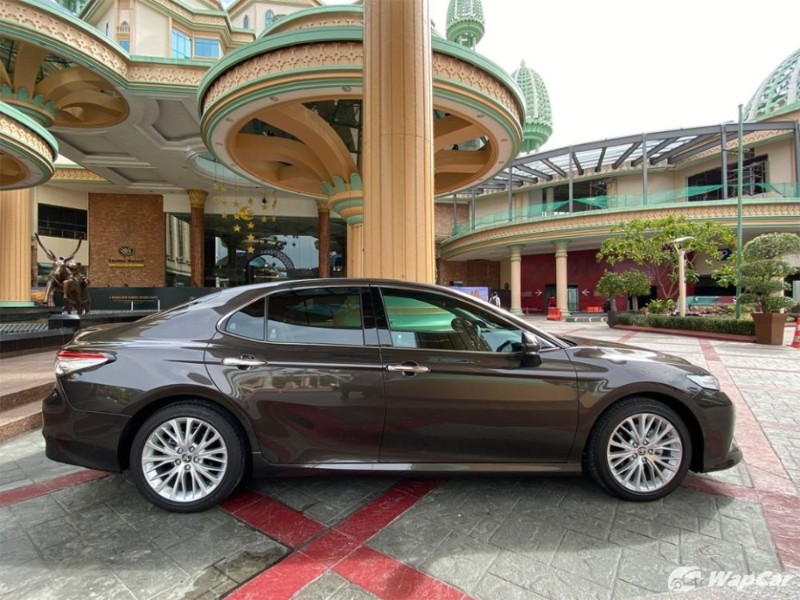 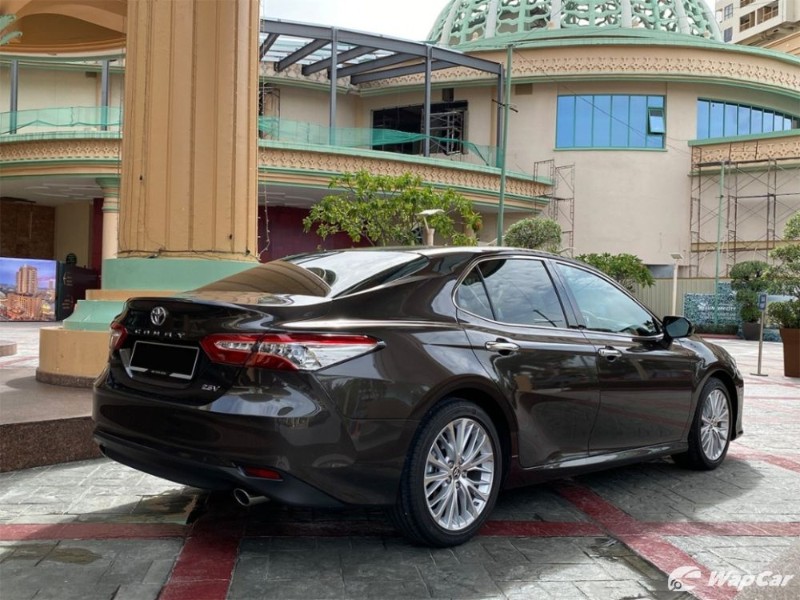 I have grown to accept that D-segment sedans do not deserve to be compared against luminaries such as the Mercedes-Benz C-Class and the BMW 3-Series, but I feel they have caught up in terms of comfort, space and even driving dynamics. I agree that the Mercedes-Benz C-Class is beautifully crafted, both in and out. It speaks and shouts contemporary as much as class and flair, well above its peers and the performance from these new downsized engines with forced induction is effortless. Maximum torque is available well below 2,500 rpm resulting in instant acceleration bettered only by those ludicrously mad electric cars. I am, however, a huge fan of naturally aspirated engines mainly for reliability and linear acceleration. The drivetrain is a generation old but I would have no problems maintaining this car with my trusty mechanic after the warranty has ended. 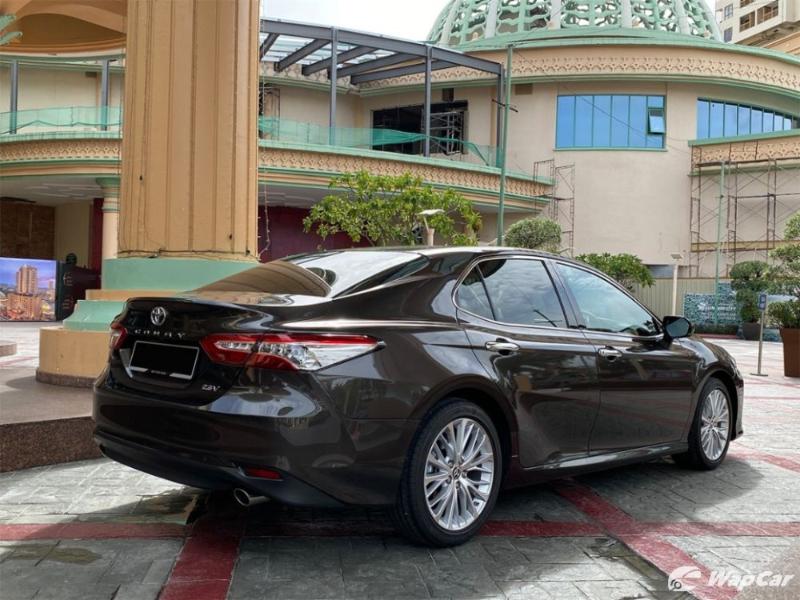 It is not often that a Toyota model is bestowed the Beautiful Monster, let alone a Camry! I don’t suppose many will disagree that this Camry is a sleek, smooth and elegant looking machine; a far cry from Camrys of the past where it carried the torch alongside Honda’s Accord as the definitive Japanese D segment family saloons. The Camry now joins the Mazda 6 in the elite group of desirable yet functional family saloons.

Hot on the heels of this car is a never-seen-before set of 18-inch multi-spoke rims which are a pain to wash but as it strikes a resemblance to my dream set of BBS LM rims, I was prepared to live with this. These are shod with Bridgestone Turanza T005A tyres measuring 235/45/R18 in profile. Tyre noise is audible above legal speed limits but acceptable although I suspect similar comfort-touring biased tyres from a certain French company could be better. Other visual aesthetics include LED lighting for the head and fog lamps, wing mirror-mounted turn indicators and the rear cluster of brake, reverse and turn indicators. 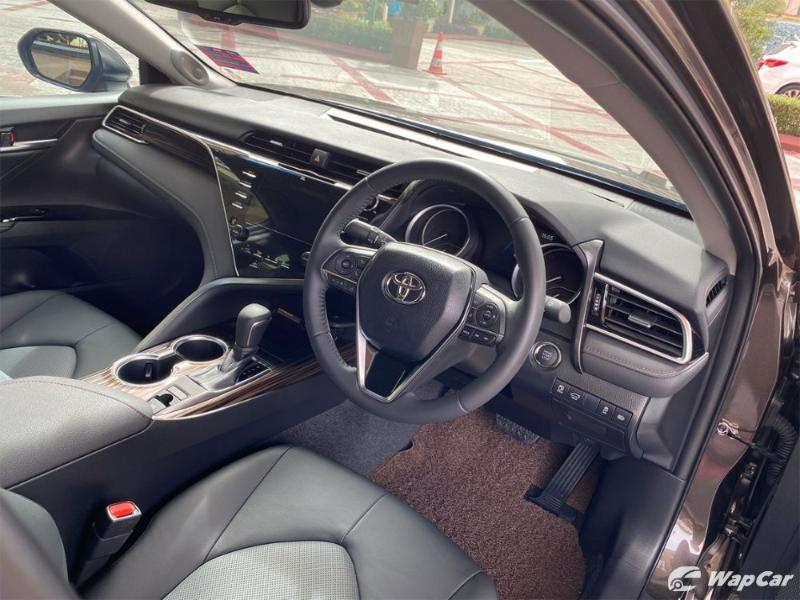 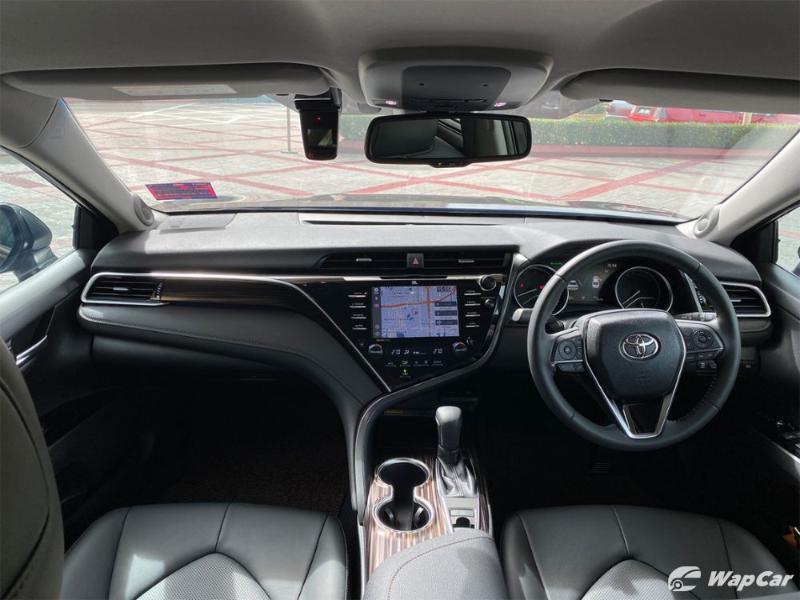 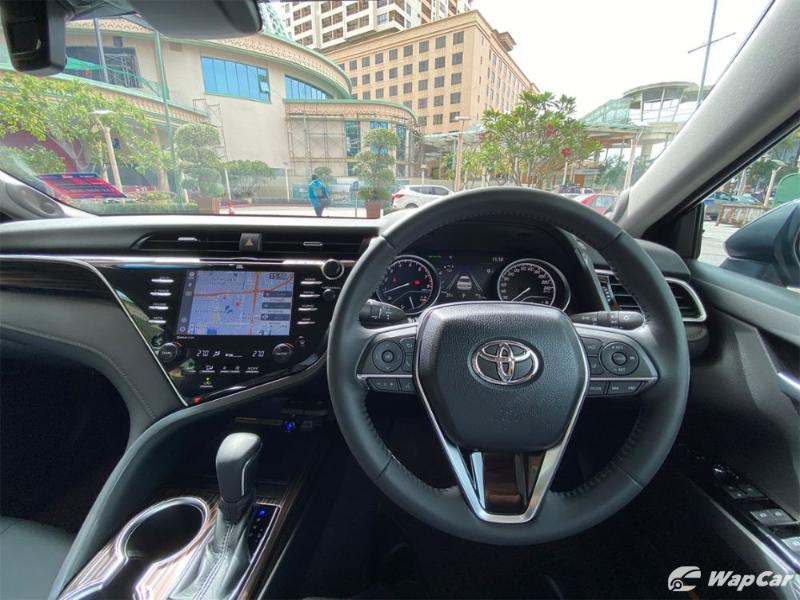 The interior of this Camry has also taken a huge step forward in design, with an asymmetrical centre console design housing a touch screen navigation system, audio and air conditioning controls as well as a Qi wireless charging tray. While many lament the absence of Android Auto and Apple CarPlay, I was more intrigued by the JBL sound system which was stonkingly good. From Andrea Bocelli to Bruno Mars, it made my daily commute pretty stress free. Siting position is probably the lowest in the Camry’s history without sacrificing all-round visibility while egress for the driver is aided by its automatic seat lowering and retracting function when the engine is turned off. As you unlock the doors, the driver seat and steering column moves into the last position stored in memory or the same can be programmed into the key fobs. 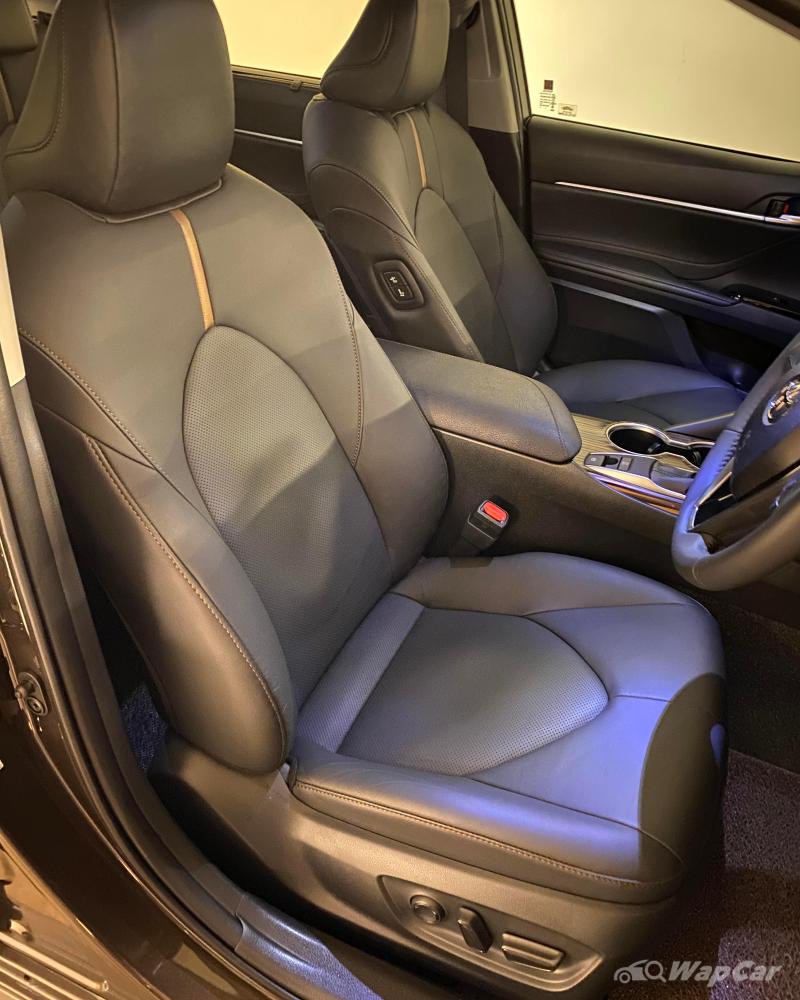 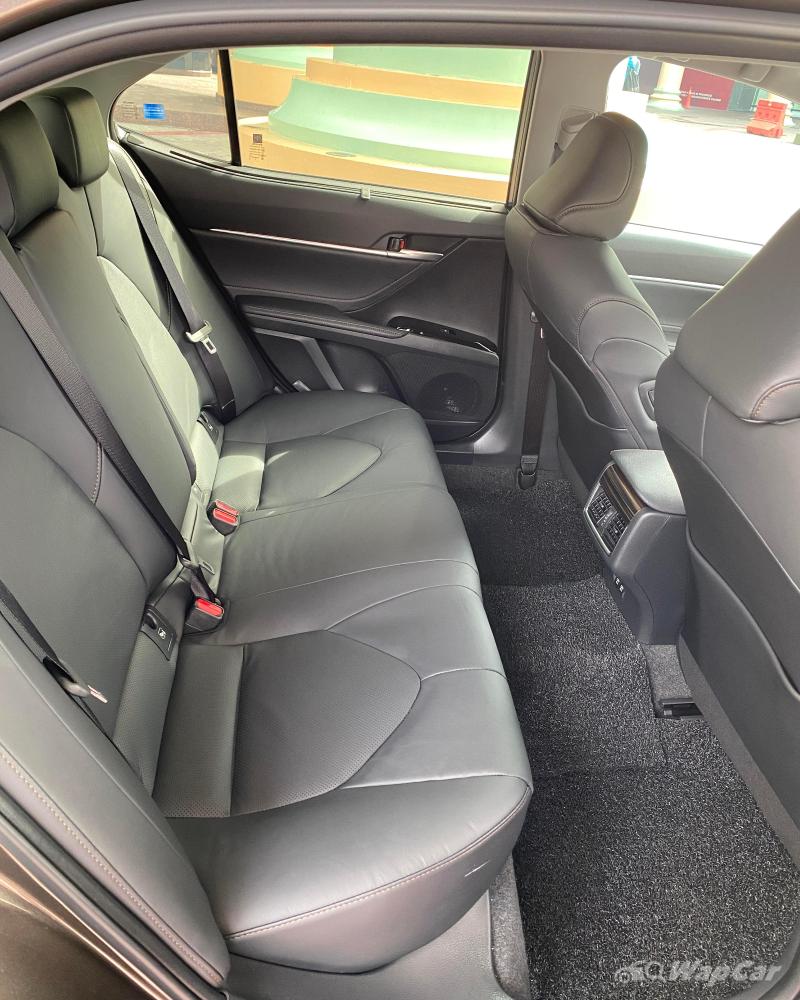 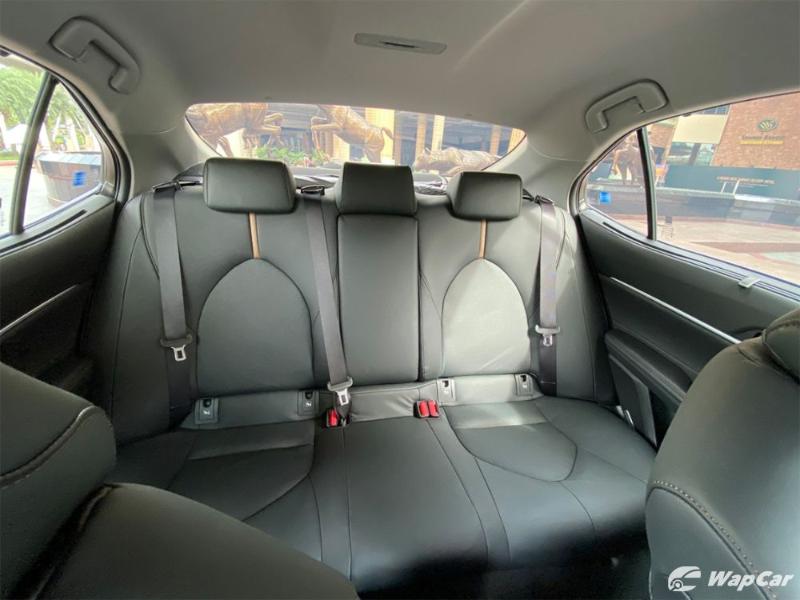 The seats are plush and comfortable while rear accommodation is a pretty standard D segment affair with acres of space although I can foresee some complaints from taller passengers egressing from the rear seats with the lower roofline. Trunk space is marginally smaller than class rivals but more than adequate for most while loading and unloading are made easy with its wide opening aperture. Items I wished this Camry was equipped with include ventilated seats like what you get in the all-new Toyota RAV4, 60:40 folding and reclining rear seats and keyless smart access for all 4 doors. 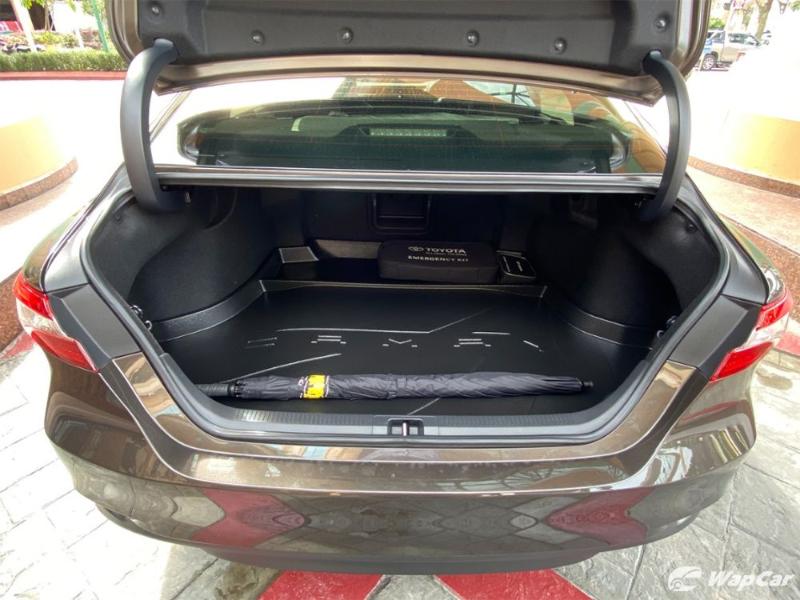 With a meagre 184PS at 6,000 rpm accompanied by 235Nm of torque at 4,100 rpm, performance is adequate but it isn’t as sedate as the figures suggest. On my daily commute, a 110km/h cruise sees the engine running below 2,000 rpm with an average fuel consumption of 9.9km per litre and a total range of 600km per tank. Acceptable figures for me while I was told to expect further improvement as I have only taken delivery of this car on 4th June 2020. Dropping gears for acceleration is a simple task of flicking the gear lever to the right in ‘Tiptronic’ style, which to me feels more natural than paddle shifters in passenger cars.

While I’m proud to accept the drivetrain in this car, I was somewhat gobsmacked with the new drivetrain in the recently launched Toyota RAV4 2.5. Engine and gearbox response was swift during acceleration and deceleration where it was ready to pounce and surge forward at the slightest dab on the fuel pedal. Gutted? Probably…

The ride in this car is nothing short of great. True to what Toyota has claimed, the TNGA platform has really made their cars drive, ride and handle unlike any other Toyota passenger cars of the past. Journalists have heaped praise on this modular platform and Adrian from WapCar attested that the ride and handling of this Camry could only be imagined if BMW and Mercedes came together to put forward what they know best. It soaks up bumps and potholes with ease and aplomb, a much-needed feature for cars in this class where creature comfort is high on the list.

In handling corners, I must commend Toyota for paying considerable attention towards the balance of the car when weight is transferred during high-speed corners as body roll is kept to a minimum and movement is fluid. It’s not just a case of reducing body roll and leaving everything else to the tyres and electronic aids to keep everything in check. Wishful thinking but an old hydraulic power steering would do wonders to the drive or perhaps a weightier steering feel but at the expense of ease and comfort.

All things considered, I am satisfied with this Camry. It drives, rides and corners in a manner you would not associate Japanese D segment cars with. True it could’ve had the new Dynamic Force engine and 8 speed automatic gearbox in the RAV4 2.5 but at the expense of a much higher price. What started as a search for a daily work horse has now ended with a car serving that purpose but with added athletic capabilities, creature comfort and visual aesthetics that require no further injections or plastics. 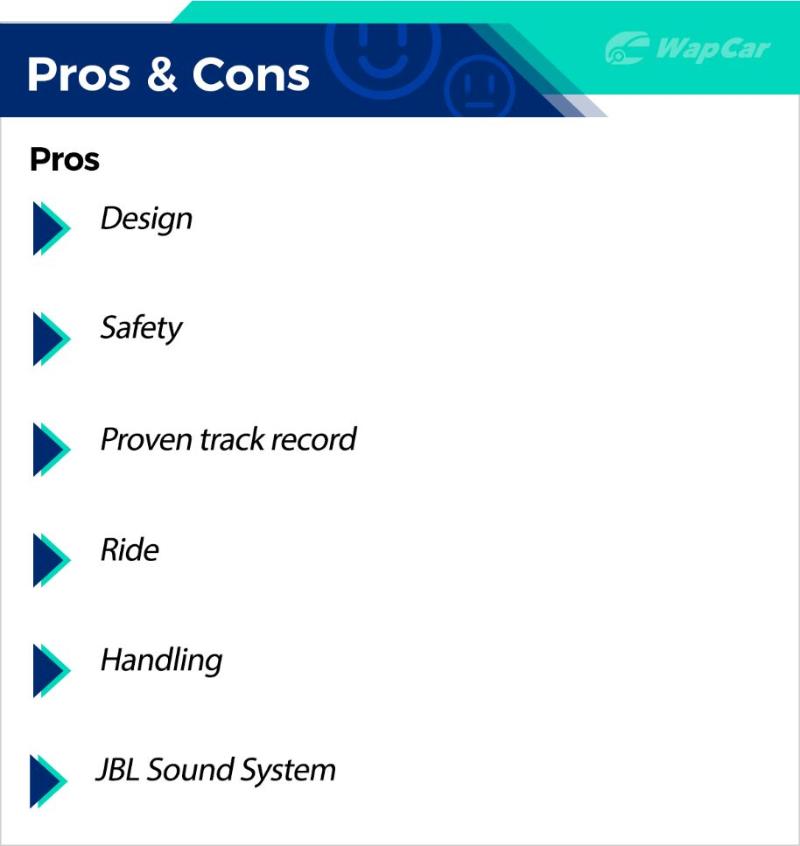 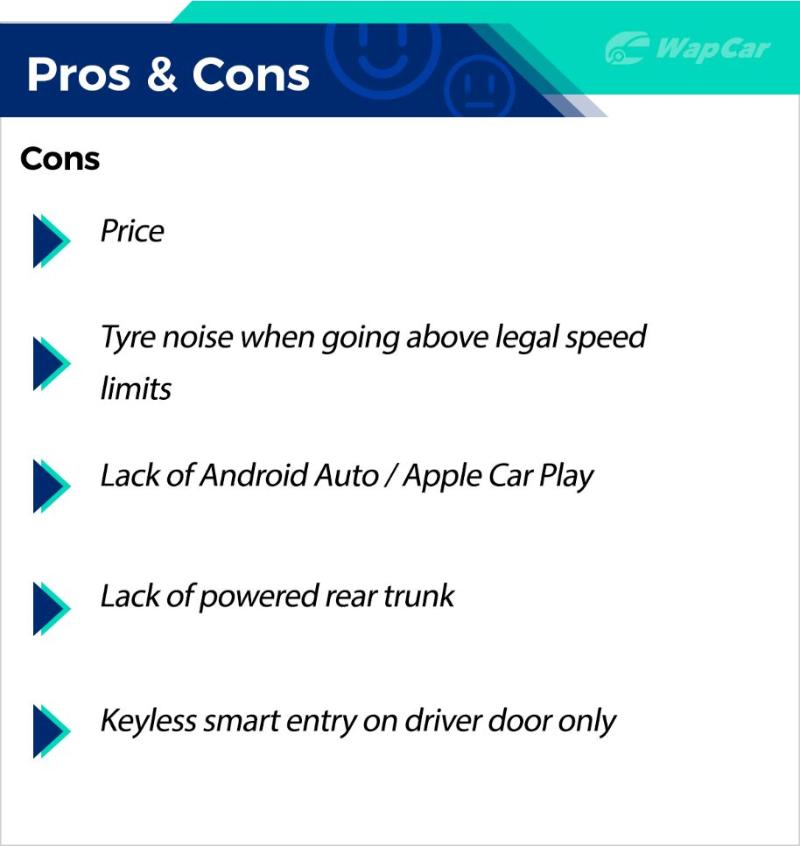