A recond Toyota Alphard/Vellfire is nearly RM 44k cheaper than UMW Toyota's official import, should you buy the recond? 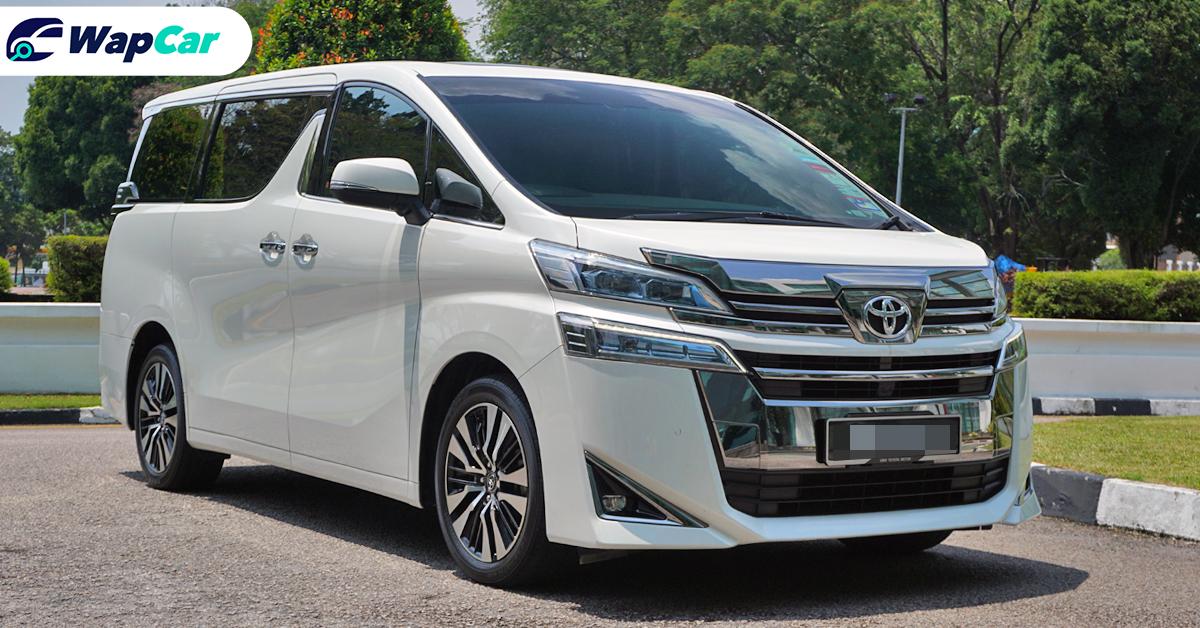 There's no doubt that the Toyota Alphard (and its Vellfire twin) is the best luxury MPV on the market. Few other cars can match the Alphard/Vellfire's spaciousness and ease of entrace/exit. Compared to a Mercedes-Benz S-Class, the Alphard's sliding doors allow you to step in/out of the car as if it's a room, rather than a car.

The only question left is whether to buy a cheap reconditioned (recond) unit or pay up for an officially-imported unit by UMW Toyota Motor?

Let’s take a closer look at the pros and cons.

UMW Toyota Motor offers the Toyota Vellfire 2.5 for RM 382,300 and the Alphard 3.5 for RM 464,000, which commands a significant premium over their reconditioned counterparts.

As such, a reconditioned Toyota Vellfire 2.5 is roughly RM 62,000 cheaper than a brand new unit from UMW Toyota Motor, while the price gap for the Alphard 3.5 is about RM 44,000.

After all, you can potentially save up to RM 62,000 buying a reconditioned unit, sweetening the deal for some.

But should you go for a reconditioned unit? 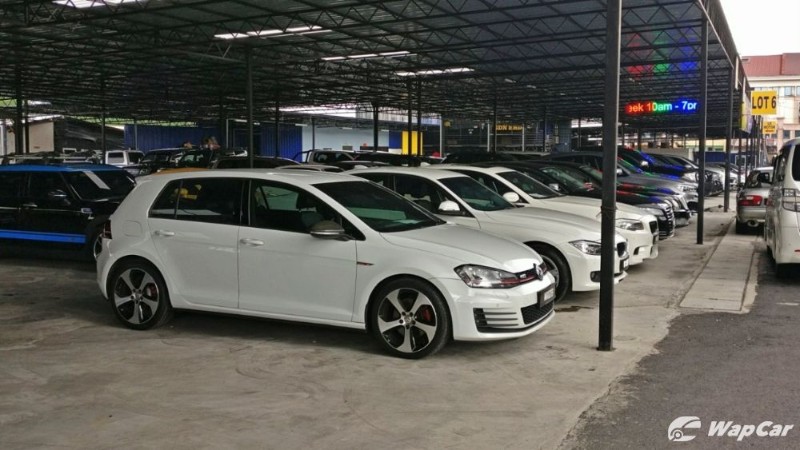 Of course a recond unit will always be cheaper, it's afterall a used car.

Also remember that there no used car/reconditioned car dealer in Klang Valley that will sell you the car at its advertised price. There is always some hidden charges and the customary 'processing fee,' amounting to several thousand Ringgits, applies, further minimizing the price gap between a reconditioned and brand-new unit.

Many of these recond units are advertised as 'low mileage, almost new' cars. You can be certain that all of these recond cars have had their mileage tampered. Dealers will tell you that Japanese drivers don't drive much. Yeah right. Funny.

Unless you have a copy of the car's Shaken (mandatory Japanese vehicle inspection) or vehicle auction sheet (details in the following section), you can be certain the odometer has been rolled back.

History – How sure are you that the car is really accident free?

While reconditioned cars may appear cheaper than their brand-new counterpart, keep in mind that these cars may have been involved in an accident in Japan. 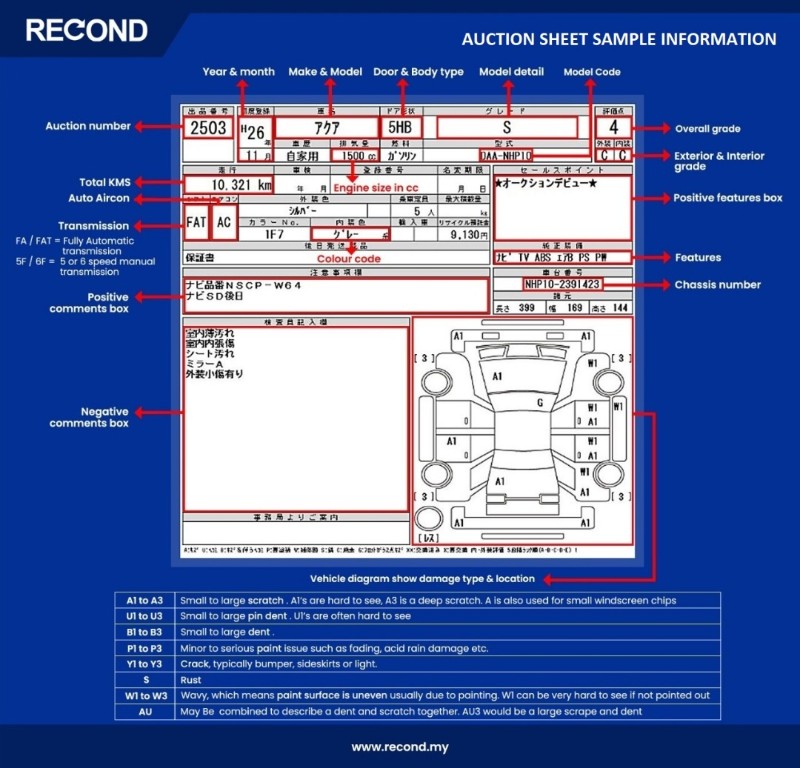 If you’re considering to get a recond Toyota Alphard, make sure that you verify the car’s history by getting a copy of its vehicle auction sheet from companies like recond.my or scrut.my.

If a recond car was exported out of Japan via a Japanese auction lot, which happens most of the time, these companies will be able to trace the car’s history.

Think of the auction report as the car’s history book, as this is the most reliable method to verify the car’s condition when it left Japan, on top of confirming the actual year of manufacture and mileage on the odometer.

To obtain the report, you’ll need to provide the car’s Vehicle Identification Number (VIN) to the earlier-mentioned companies and they will charge a small fee for the report.

If the recond car doesn't come with this report, turn around and walk away.

You should also turn around and walk away if the condition on the Japanese auction report is rated as "R", as that indicates that the car was involved in an accident and has been repaired. 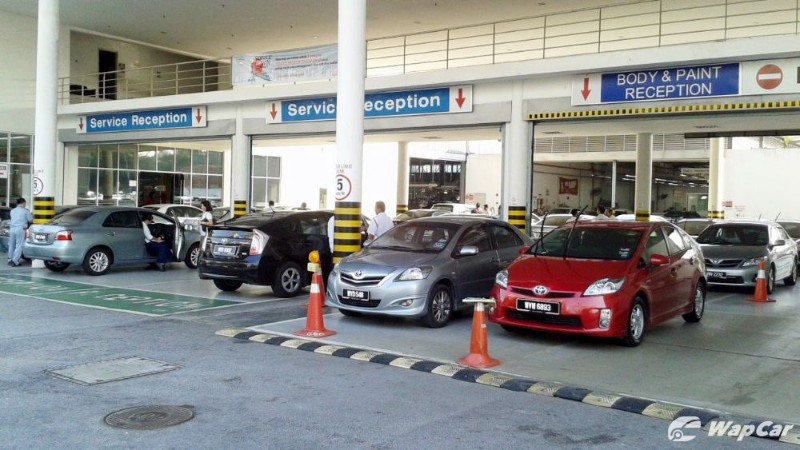 Support from car manufacturers become are important, and that is lacking when you buy a reconditioned Toyota Alphard.

Reconditioned car dealers will not entertain your faulty Takata airbag inflator, nor will they bother with updating your car’s built-in maps. 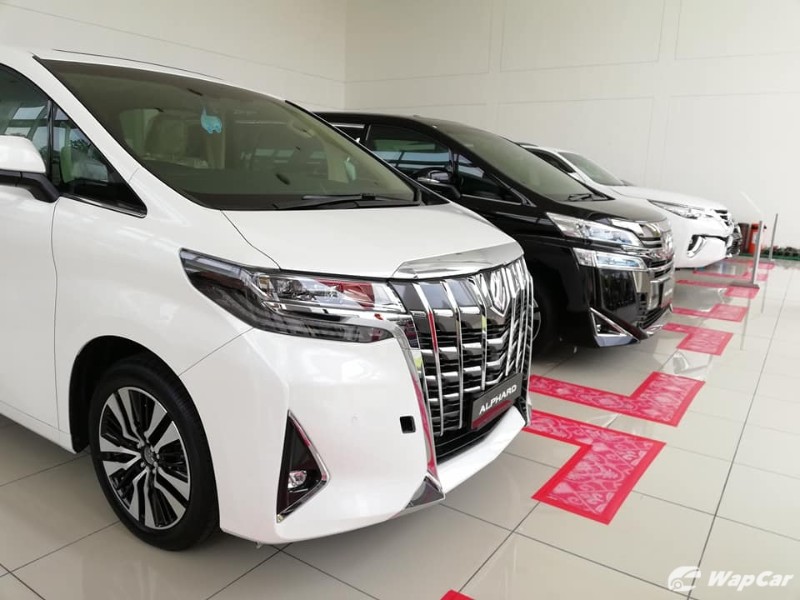 However, if you purchase a brand-new Toyota Alphard from UMW Toyota Motor, you’re backed by a 5-year, unlimited mileage warranty.

If Toyota issues a recall notice for the Alphard you bought from UMW Toyota Motor, you can bring your car to any of Toyota’s service centres to have it sorted.

But with a reconditioned Toyota Alphard, there’s no way of knowing if your car is involved in a recall or not, as the recall notices are in Japanese.

Some recond dealers will also offer you the option of paying more for warranty. It's a good option for added peace of mind but as these are third-party warranties, the coverage varies. Read the terms and conditions carefully.

Infotainment – Can you read Kanji? 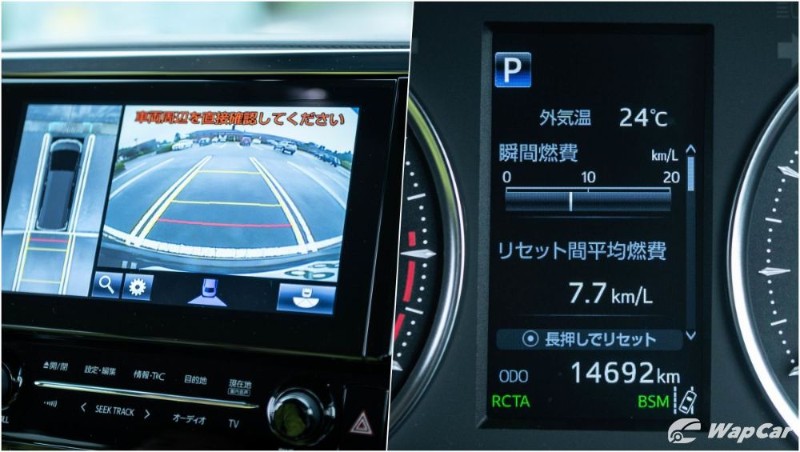 The reconditioned Toyota Alphards you see in recond car dealers were never designed for export markets. 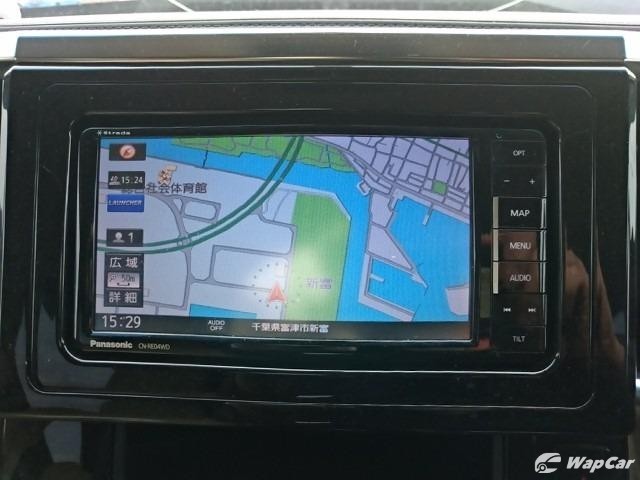 As such, their infotainment and car’s controls are locked in Japanese, and there’s little you can do about that.

Keep in mind that Japanese FM radio frequency ranges from 76 to 95 MHz, which limits the number of channels you can listen to. In the past, you can easily swap the head unit with an after-market one but these days, many of the cars settings and controls are integrated into the head unit so it's no longer possible to swap it with an after-market unit without losing access to some of the car's functions.

But that’s not the case with an officially-imported unit, as Toyota has fitted an English infotainment system and car controls.

Mechanically – Recond and official units look the same, but they’re not 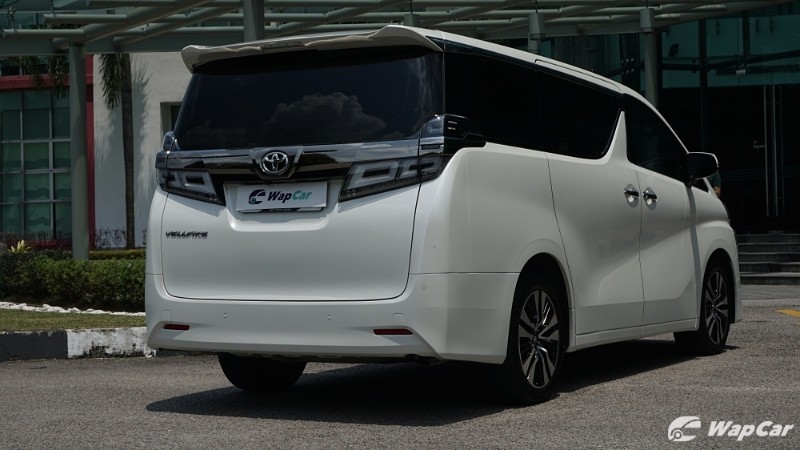 At a glance, both the recond and official units look identical, but that’s far from the truth.

In an effort to cope with our unique driving habits, Toyota has recalibrated the ECU so that the engine can cope with Malaysian weather and driving habits, as we tend to travel longer distances at high speeds in hot weather conditions, very different from Japanese driving conditions. 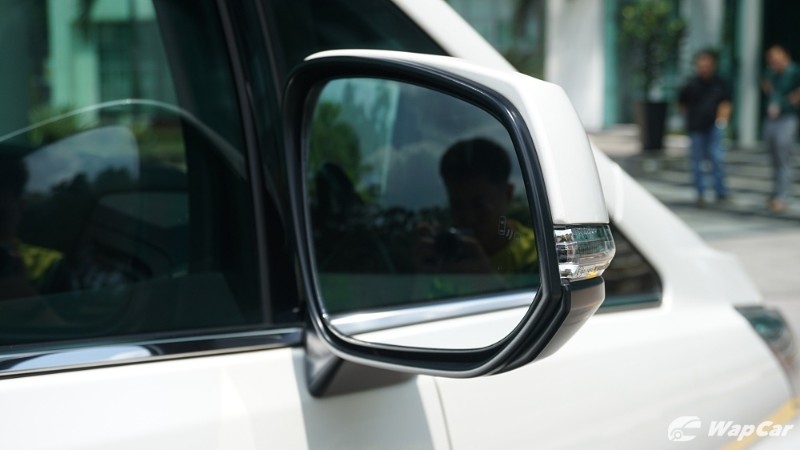 Furthermore, units imported by UMW Toyota Motor have larger side mirrors that increases the driver’s field-of-view, as Malaysia has a lot of motorcylists.

Toyota has also factored in our local road and weather conditions, as well as fuel quality when it comes to customizing the Alphards for Malaysia.

Exterior – How to tell the difference?

The biggest giveaway between a reconditioned Toyota Alphard and an officially-imported unit is the number plate frame.

Reconditioned Toyota Alphards also come with Japanese dealership and emission stickers fitted at the rear of the vehicle, something that isn’t the case with units from UMW Toyota Motor.

Apart from that, the VIN is also different.

Despite both models hailing from the same Toyota plant in Inabe, recond and UMW Toyota Motor's Alphards wear different VINs. 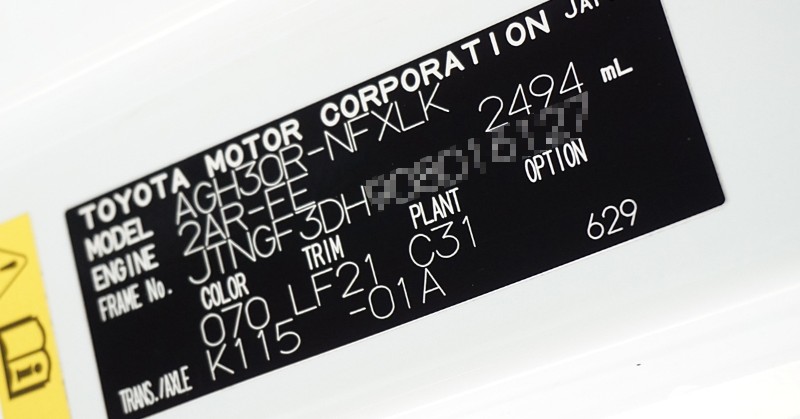 If the VIN starts with JTNGF3, with JT being Toyota Japan’s identifier, it means that this is an officially-imported unit.

For Alphards and Vellfires sold in Japan, their VINs start with either AGH3x or GGH3x, followed by a 7 digit identifier.

Why do you think Toyota will go to the extent of giving export units of the Alphard a different VIN? Like we said, they are not exactly the same cars.

Conclusion - Recond ones offer good value, but be smart in selecting which unit

At the end of the day, the choice between a reconditioned Toyota Alphard or an officially-imported one depends on you.

Granted, buying a officially-imported one gets you a brand-new car with a warranty and aftersales support. It's a hassle-free, peace-of-mind purchase.

On the other hand, as for reconditioned units, apart from being much cheaper, you're typically spoilt for choices, as the selection of colours and specifications are more than what UMW Toyota Motor offers, as recond dealers also offer the Alphard with a 2.5-litre engine, in addition to the Alphard 3.5 and Vellfire 2.5.

Furthermore, with a reconditioned car, you can even get a hybrid version of the Alphard/Vellfire, or even one kitted out with the full Modellista bodykit, but keep in mind of the risks. Recond cars are used cars so the general rule of thumb for buying used cars applies. Recond cars offer great bargain but no two recond units are the same, so selecting the right car from the right dealer is crucial.

At the very least, make sure you get a copy of the Japanese vehicle auction sheet before buying, and you'll need to live with the Japanese car controls and infotainment system.