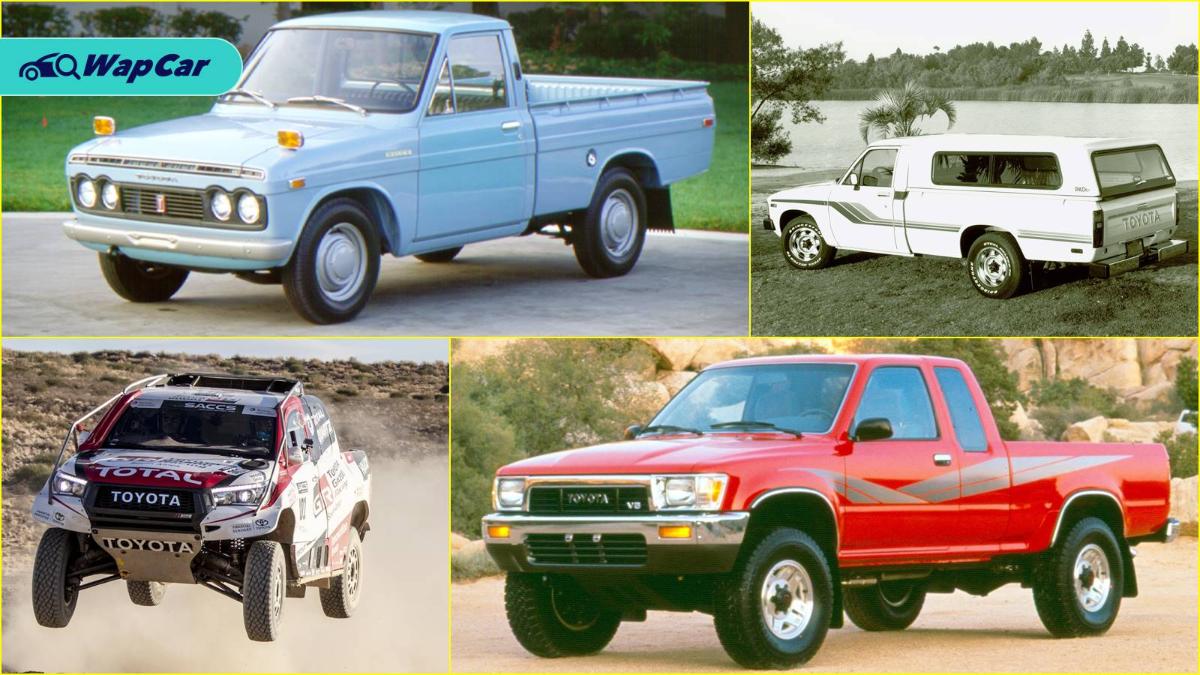 Fifty years is more than enough time for a carmaker to introduce a model, facelift it a couple of times, kill it and then bring it back as a crossover or whatever's trendy. Not many can say they 'remained true to the original', but the Toyota Hilux certainly can.

Cars evolve all the time (see above). It's quite a feat if a carmaker manages to stay true to its original recipe yet continue to improve, and that's pretty much what the Hailak has achieved in 52 years. 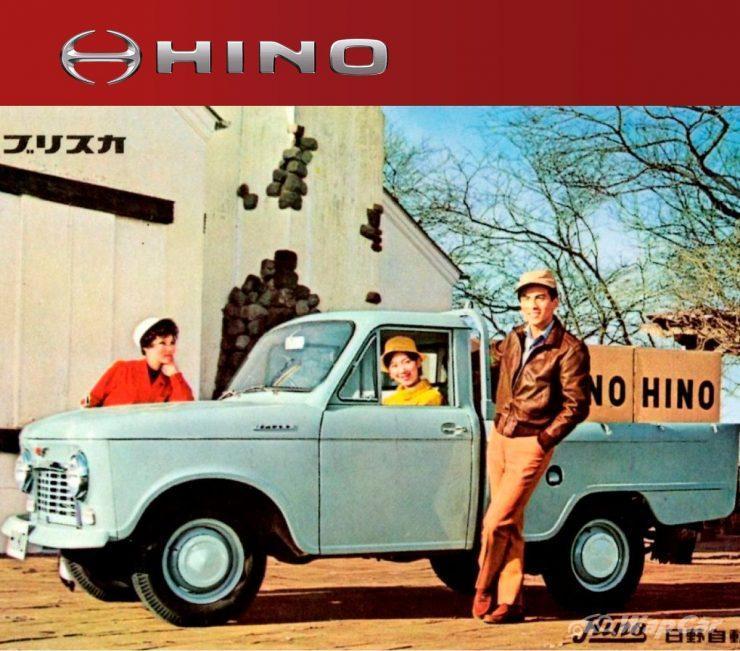 Interestingly, the Hilux didn't start life as a Toyota - instead, it traces its roots back to the humble Hino Briska. Yes, it's the same wing-badged Hino that makes the big trucks that scare you around Port Klang roads... 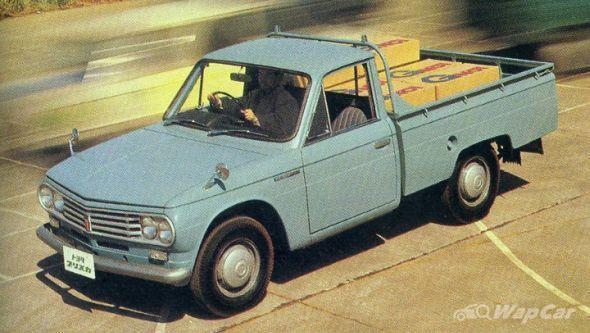 Back then, Toyota's Lite Stout went up against the Briska in the small pick-up truck market. In 1966, both entered an agreement to combine their know-how, and Hino was tasked to produce the Briska in their Hamura factory. 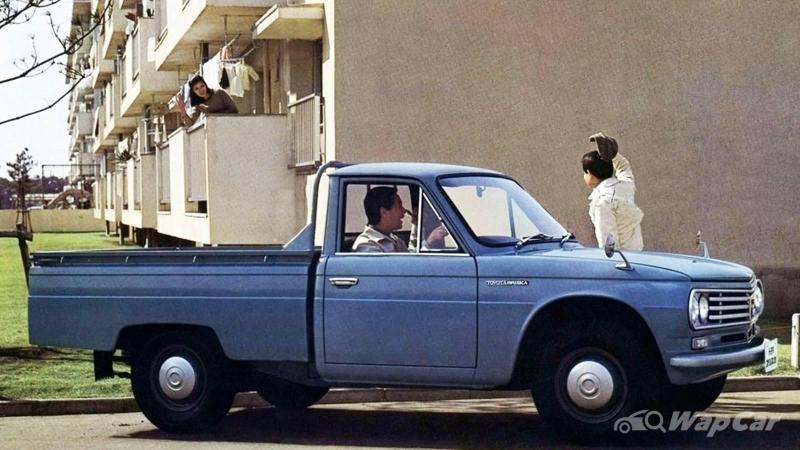 Part of the agreement is that Toyota continued to build regular cars, while Hino focused on commercial trucks, which meant that the Briska was sold as a Toyota in 1967.

All it got was a 1.2-litre, four-cylinder engine with 62 PS. Humble beginnings, but the Japanese loved it and 10,000 units were sold within a year. 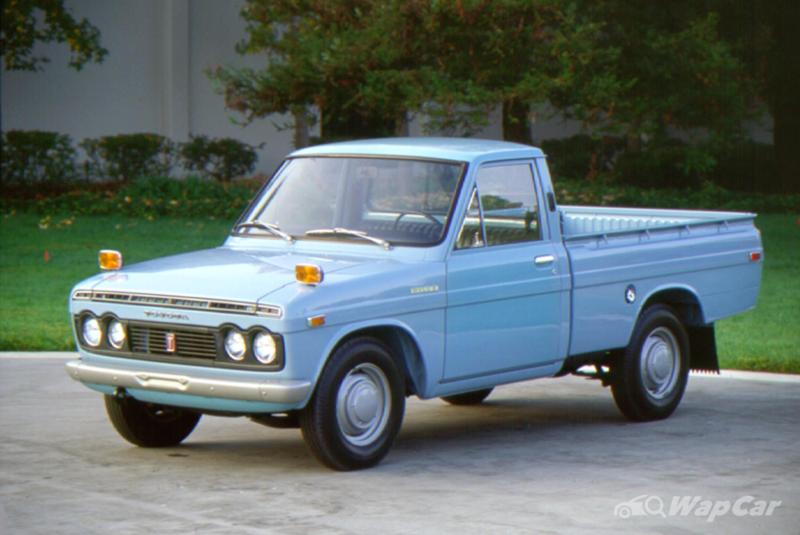 After brisk sales, Toyota developed their own trucks and slapped on a name you’ll have no prizes for guessing. This is the first Hilux, it's name being a portmeanteau of Hi (High) and Lux (Luxury). 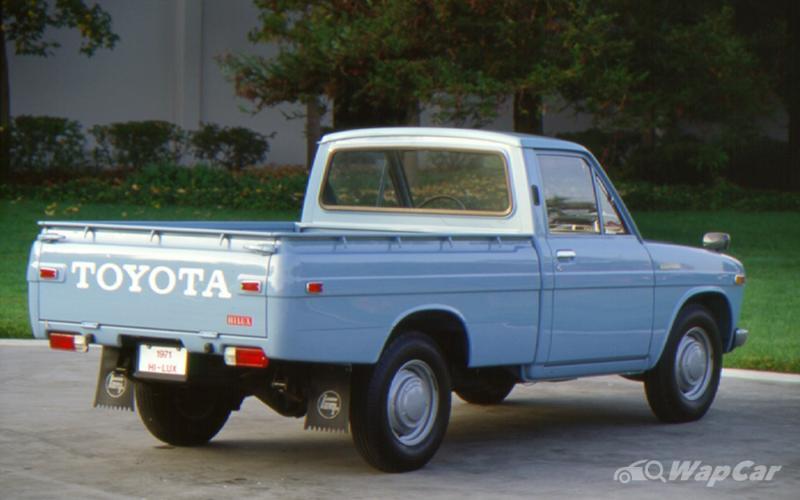 With an engine borrowed from the Toyoace van, the Hilux could ferry three passengers and carry a literal tonne of weight, thanks to its bench seat and a 1,850 mm-long cargo bed. 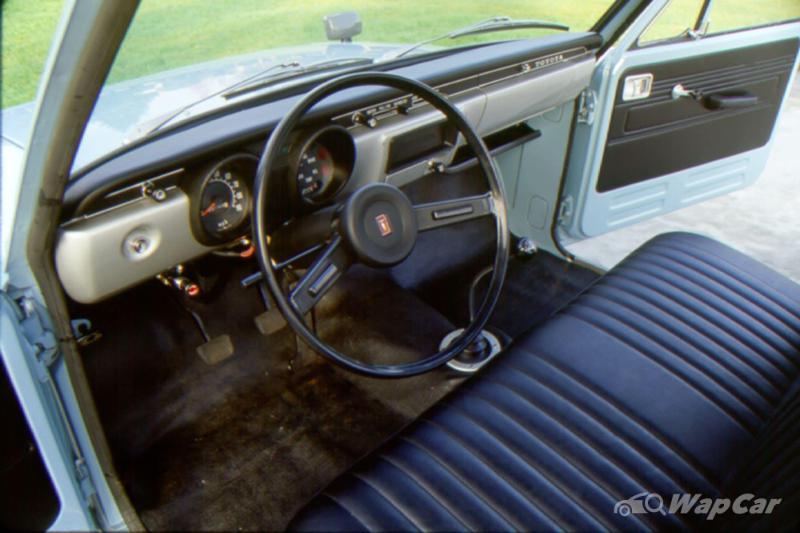 Pick-up trucks were in great demand elsewhere, and that's how the Hilux ventured overseas too. In 1969, Toyota started exporting it to the United States (its first export market) and the rest, as they say, is history. 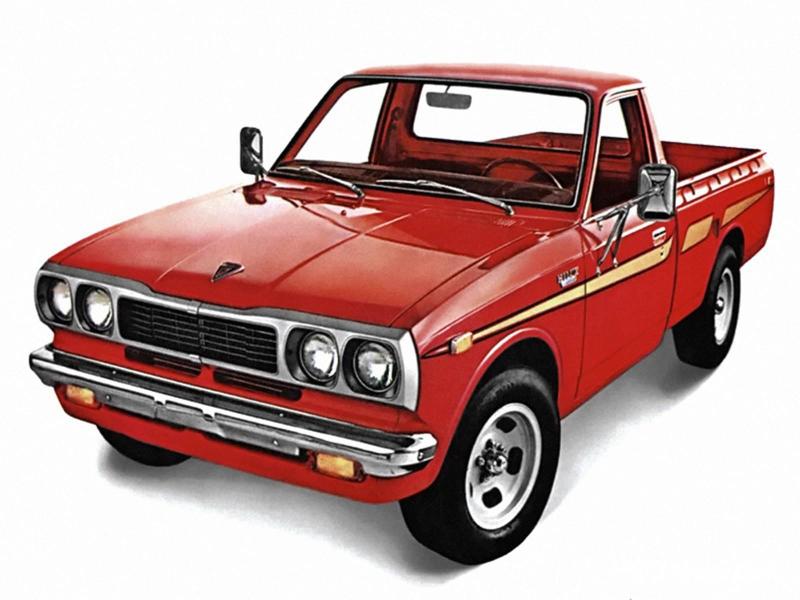 While 'luxury' was part of its name, it clearly wasn't the most luxurious thing around. For this generation, Toyota decided to focus on that aspect and make their pick-up truck a little more comfortable to be with. 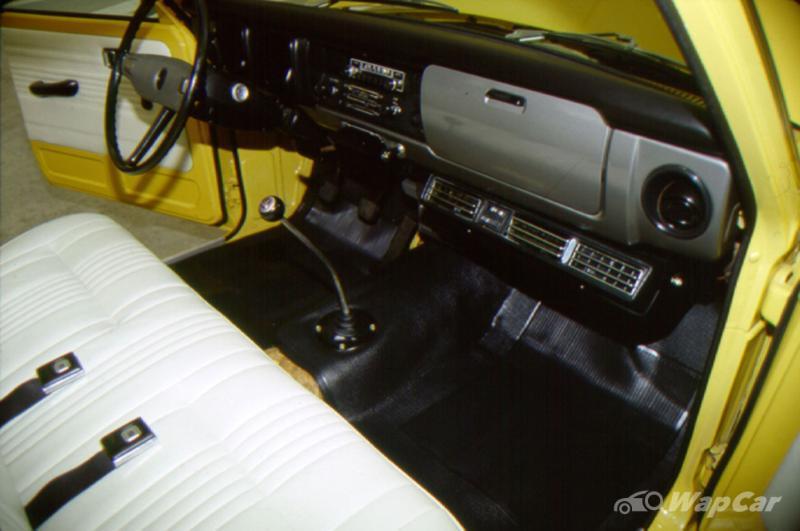 For the first time, buyers could opt between a column- or floor-mounted shifter. The former allows buyers to get bench seating that fits three and the latter, separate driver and passenger seats. 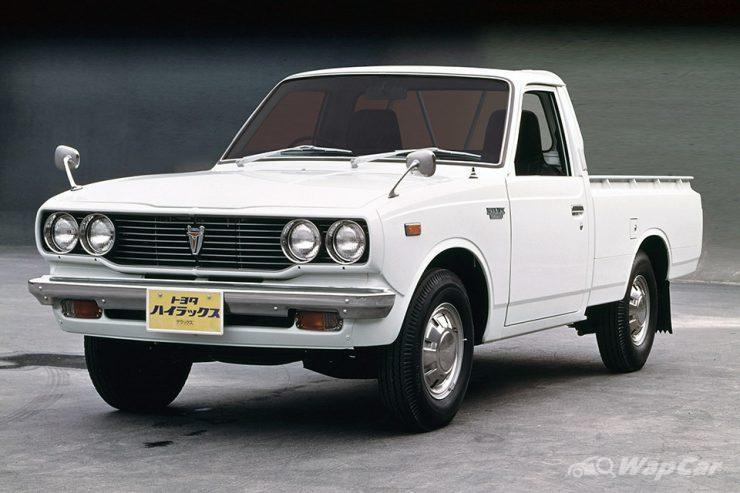 American safety standards saw Toyota having to update the Hilux's brakes with a brake booster. More power was available in the form of a 2.0-litre 105 PS engine, fitted on the Highway variant. 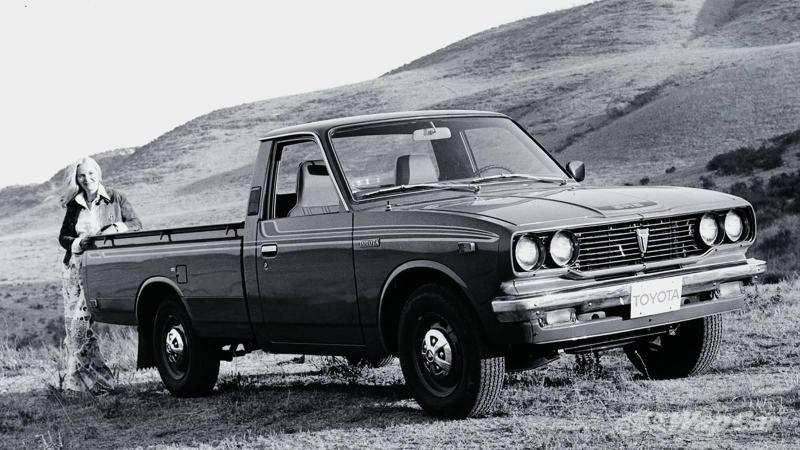 Americans couldn't get enough of it, and many of them started converting them into motorhomes. By 1975, Toyota phased out the Hilux name in favour of just calling it the Toyota Truck. 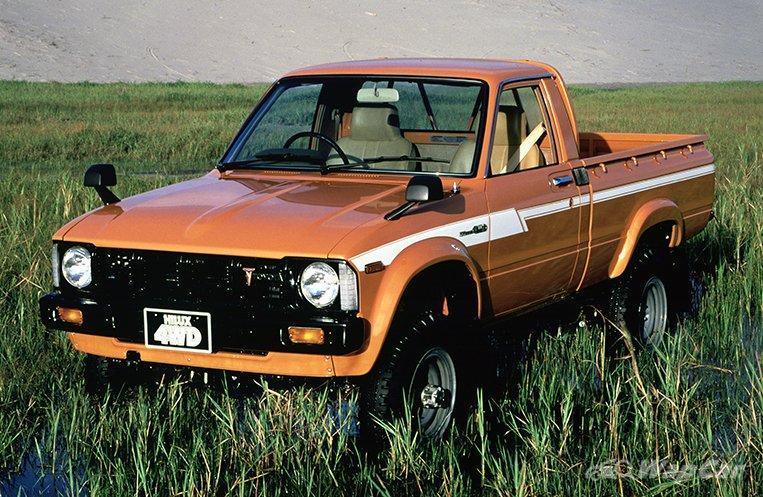 This generation pretty much shaped the Hilux to what it is today, namely due to the introduction of its four-wheel drive system and four doors. 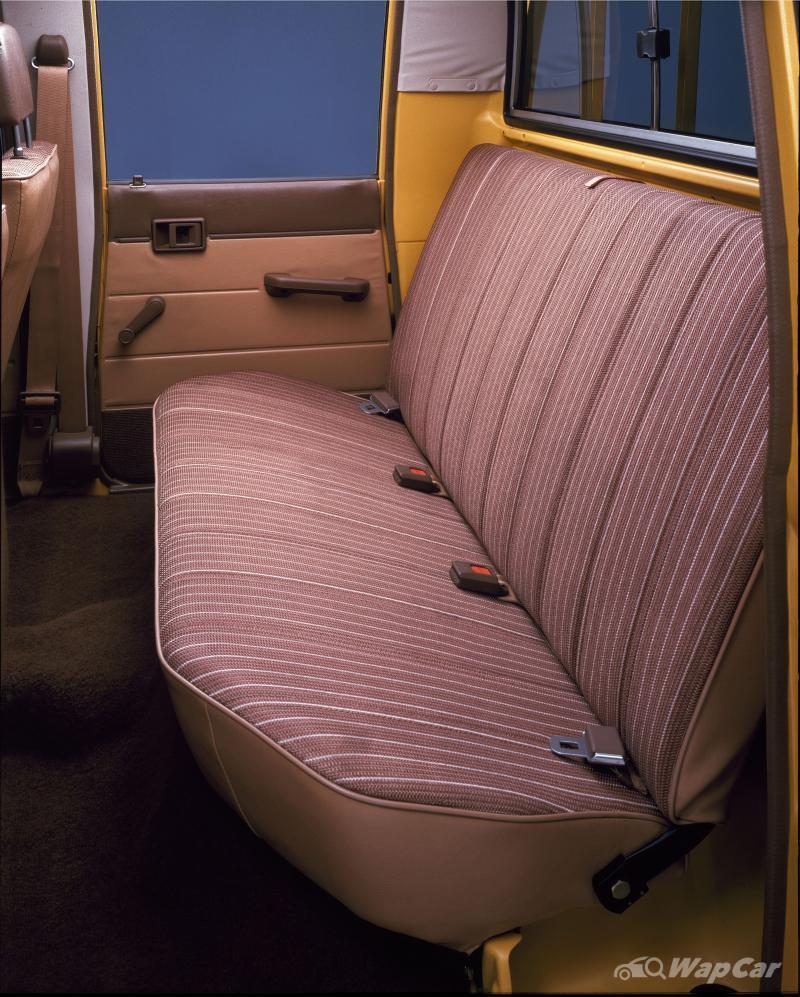 Toyota's claim to fame with this generation was 'sedan-like' specifications, equipment and ride comfort. Notable improvements made here were torsion bars replacing coil springs, and front disc brakes being standard on Deluxe variants and above. 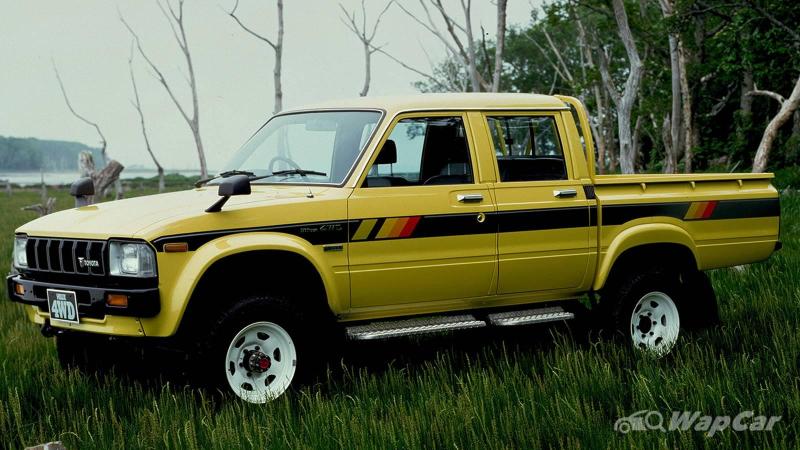 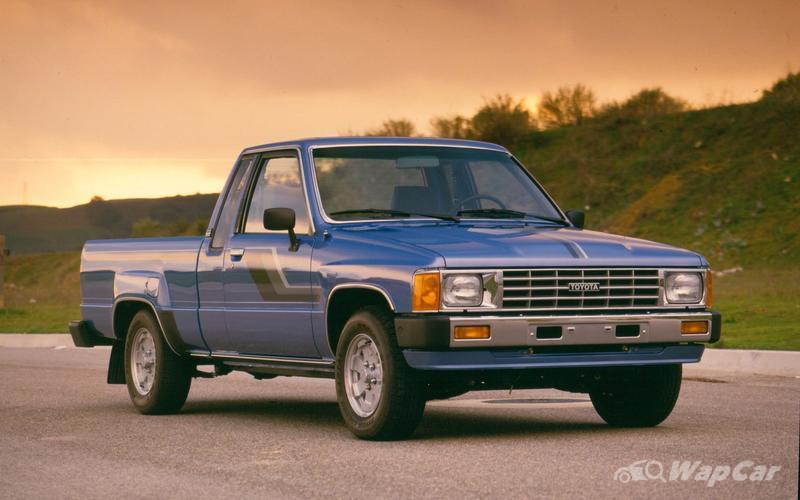 The Hilux was fast becoming a fan-favourite, and in the 1980s it was beginning to face shifts in the market. Nissan had a V6 Truck, petrol prices were cheap in the US, and customers wanted more power. 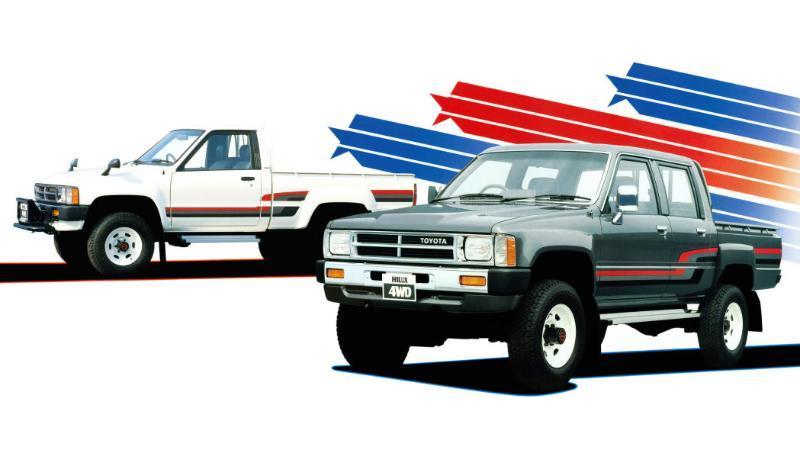 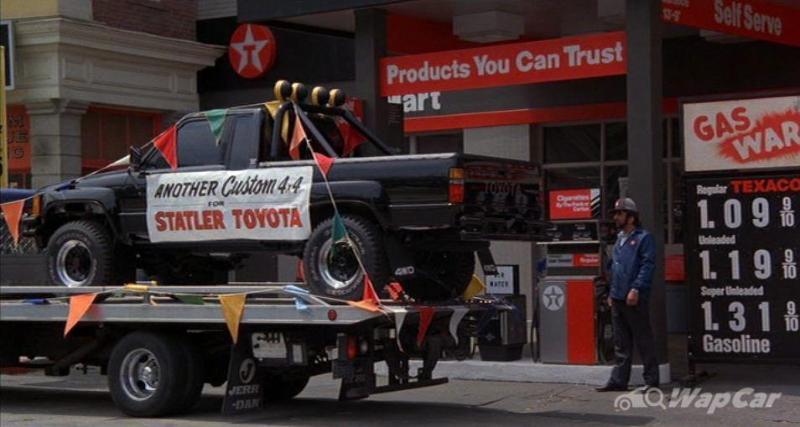 This is the generation too that would forever immortalise the Hilux in cinematic history - who could forget its appearance as Marty McFly's truck in Back To The Future? 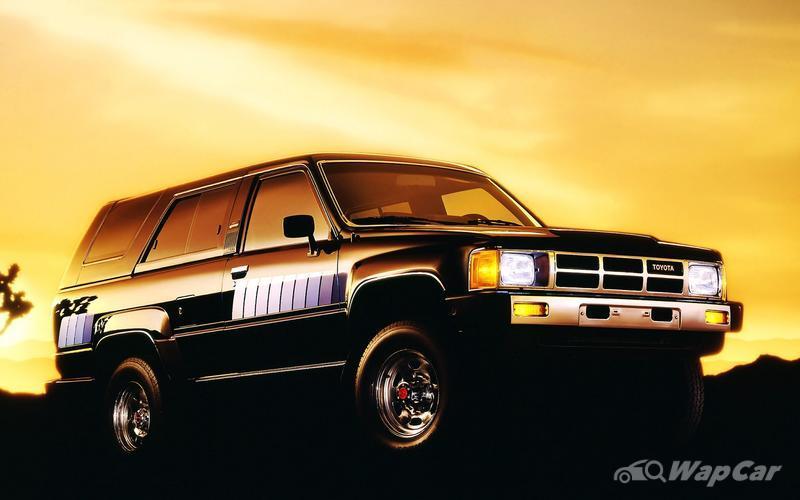 Along this model's lifecycle, Toyota also started venturing into making SUVs and created the Hilux-based 4Runner, also known as the Hilux Surf in some markets. 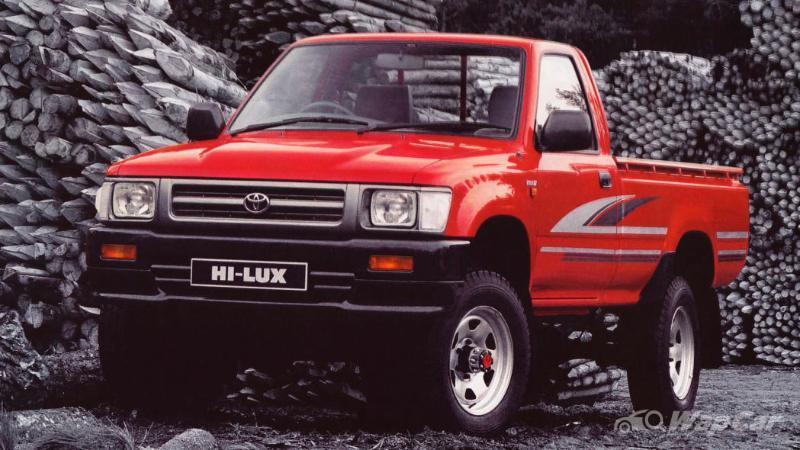 1988 saw the introduction of the fifth-generation Hilux, with a sharper focus on increased power, sturdiness and comfort. 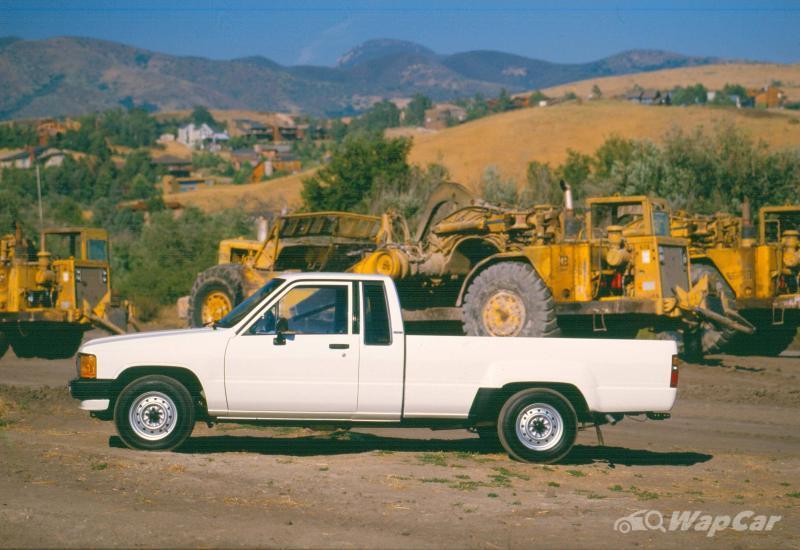 For starters, the Xtracab (long-wheelbase variant introduced a generation earlier) was further extended, and new engines were available including a 3.0-litre diesel inline-four putting out 91 PS and 188 Nm.

In 1991, Toyota started making the Hilux at the New United Motor Manufacturing Incorporated (NUMMI) plant in partnership with General Motors. Four years later, America's favourite Japanese truck would be known as the Tacoma.

Why Tacoma? Simple - it was made to suit the needs of the North American pick-up truck market, where customers tend to use them as personal vehicles and less for commercial, agricultural or off-road use. In a way, one could say it's a gentler Hilux.

The Hilux made waves in Europe too. So much so that Volkswagen built and marketed it under the VW Taro name from February 1989 to March 1997.

If you’re wondering why it’s so familiar, well, it’s the same Hilux Top Gear tried (and failed) to kill! 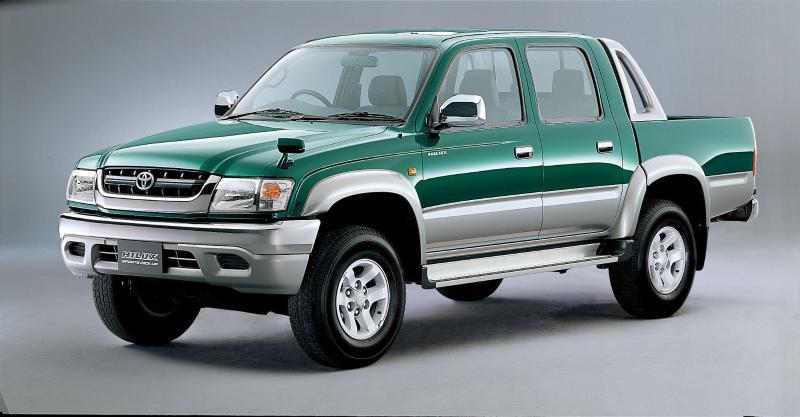 The sixth-generation Hilux that was introduced in September 1997 split the model into two lines, a business-use truck line and a personal-use sports pick-up line. 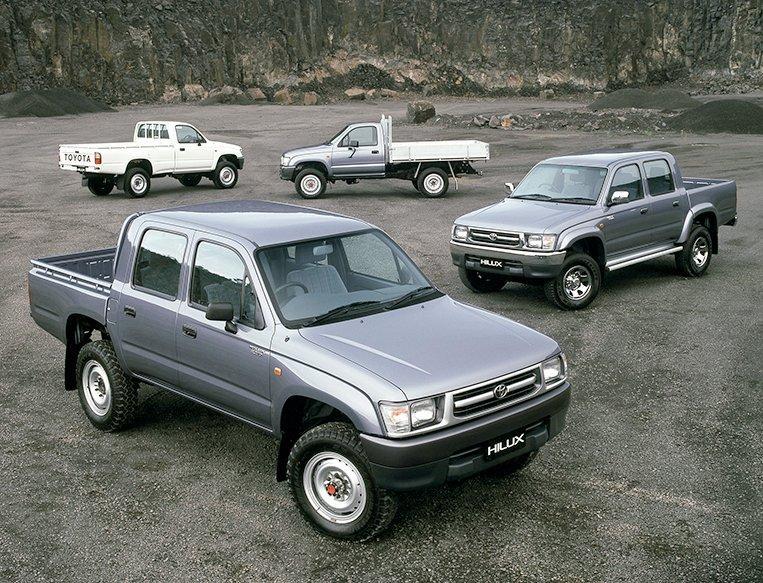 The latter came with extended cabin height and length as well as improved quietness, while the former was a bit more utilitarian.

Built from 1997 to 2005, the sixth generation Hilux was also the last to be sold in Japan. 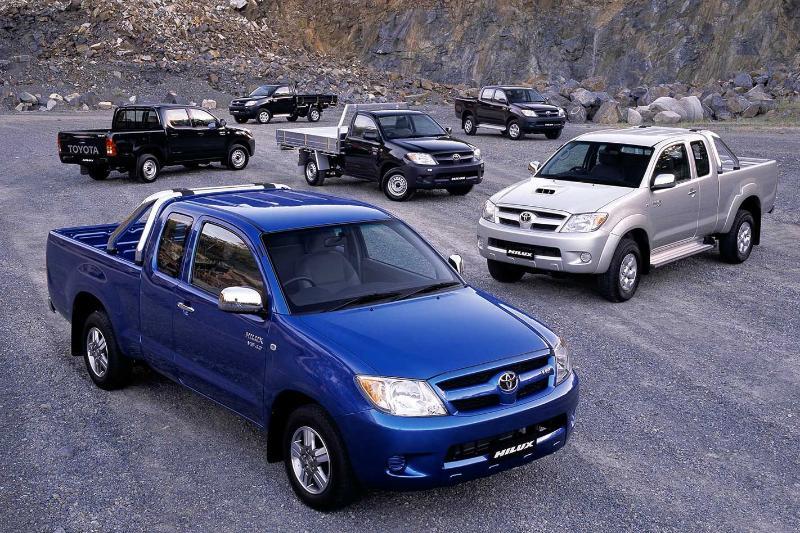 The seventh-generation Hilux was launched in August 2004 and went on sale in more than 140 countries. It's a model that certainly lived up to the the 'Lux' part of its name in more ways than one. 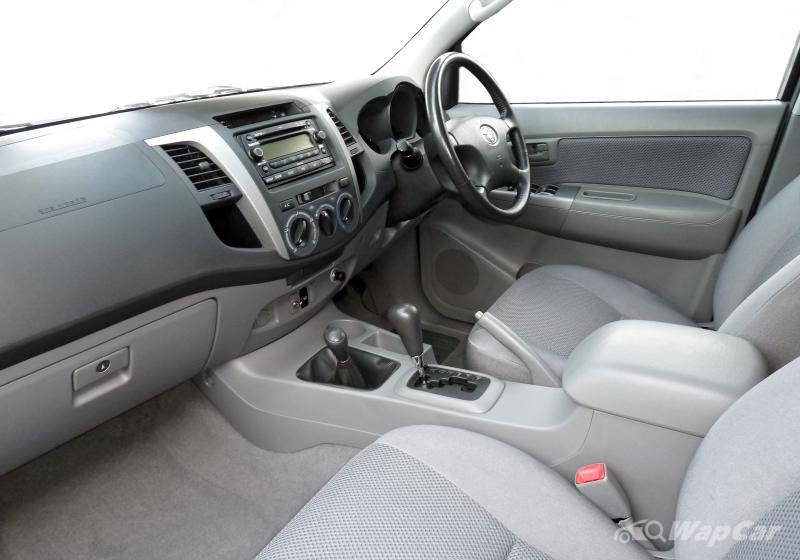 Not only was it rugged, it's now way more pleasant to be in. Creature comforts in the form of 'Toyota Touch' infotainment system and leather-wrapped steering wheel were available options. 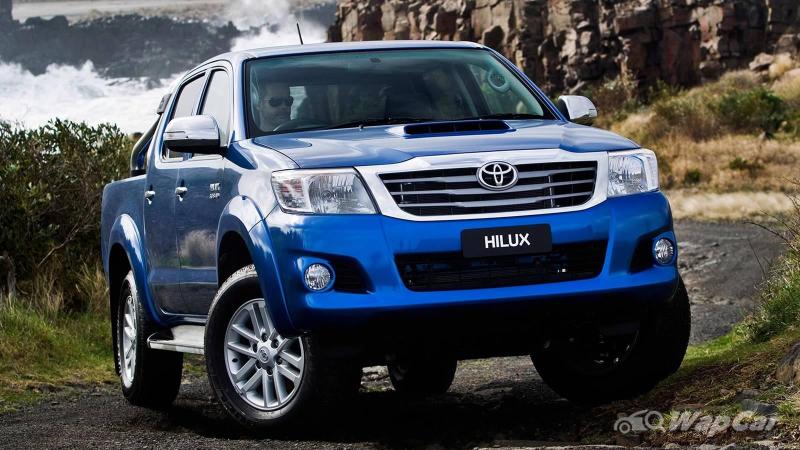 This Hilux was also the first that was not produced in Japan, with most vehicles being assembled in Thailand, South Africa, Argentina, Malaysia, Pakistan and Venezuela for sales in their respective regions. 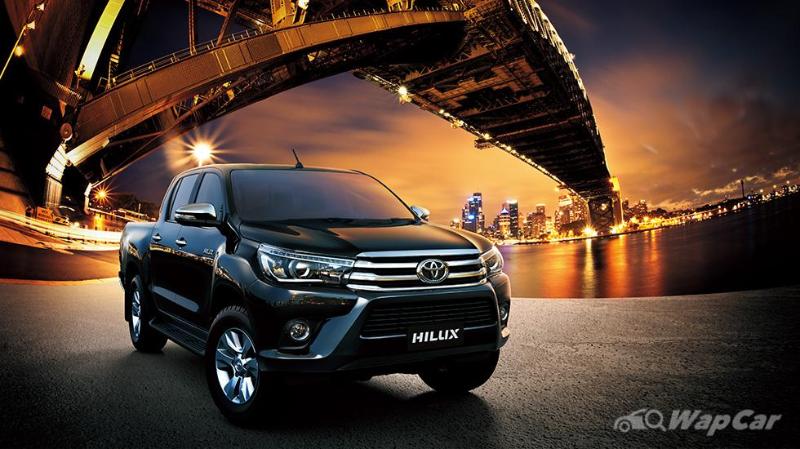 Fast forward to today, and the Hilux has turned out to be quite a status symbol, thanks in part to its reputation and enhanced daily useability with niceties like LED headlights and ADAS equipment.

It's been quite a winner too, with it being among the best-selling trucks in Australia, Europe and even Malaysia.

This generation also saw it returning to Japan in September 2017 to rave reception - orders exceeded over 2,000 units in its first month of sales.

What's next for the Hilux?

Over 19 million units have sold since 1968, making it one of the best-selling cars of all time. Toyota struck jackpot with the Hilux, and it'd be interesting to see how things shape up for this nameplate when it reaches one hundred years - a flying Hilux would certainly be very interesting, don't you think?