HomeNews2020 Honda Civic vs 2020 Toyota Corolla Altis - Which is better?

The age-old battle between two of the most popular C-segment sedans in Malaysia. For similar money, you can opt for the 2020 Honda Civic facelift or the 2020 Toyota Corolla Altis with the updated infotainment system. Without delay, let’s dive into the comparison.

However, the Corolla’s powertrain responds quicker when you put your foot down whereas the turbocharged Honda Civic has a noticeable delay.

Both feature full LED headlights and automatic high beam. But the Corolla has keyless entry on the driver side only while the Civic has it equipped on both front doors. 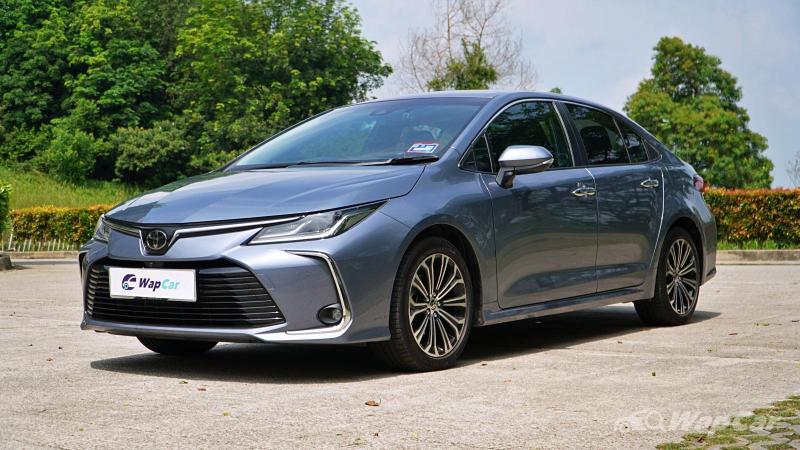 As for infotainment systems, the Corolla received an update earlier this year with a 9-inch touchscreen display, which supports Android Auto/Apple CarPlay connectivity. 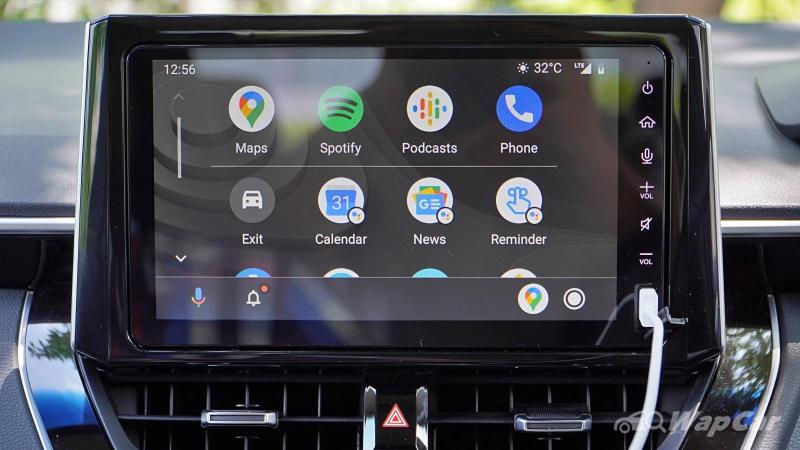 Audio quality of the 6-speaker system in the Corolla trumps the 8-speaker set up in the Civic. The Corolla’s sound system has a smooth sound signature with a soft-textured bass, and retains decent clarity in the mids and treble region.

In the Civic, sound is underwhelming. Treble is a little harsh, especially with the adjustment in the settings cranked up. Bass gets boomy if dialled up, so it's best to leave things closer to neutral. But no matter the adjustment, it just lacks refinement and definition. 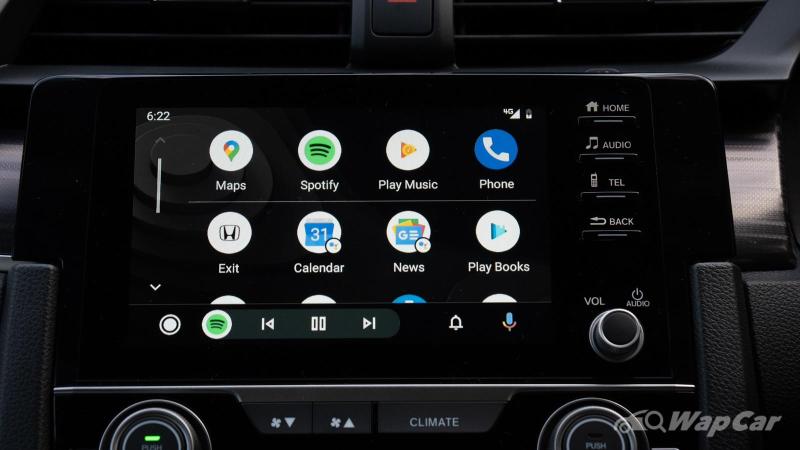 Moving on to safety features, advanced driver-assistance systems (ADAS) to be precise, the range-topping variants for both the Honda Civic and Toyota Corolla are featured with Honda Sensing and Toyota Safety Sense respectively.

Honda Sensing in the Civic bundles:

Both are similarly equipped, save for the LaneWatch in the Civic and BSM in the Corolla. In execution, the Toyota Safety Sense is just a little smoother in operation in terms of braking, accelerating and steering. But we’re splitting hairs here. 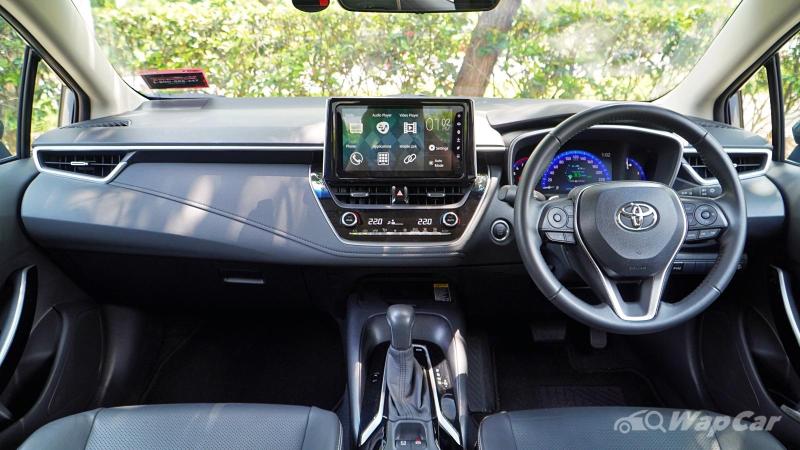 One of the criticisms we have for the Toyota Corolla is the lack of storage spaces in the cabin. The door bins are average-sized at best and there’s no additional storage space in the centre console. 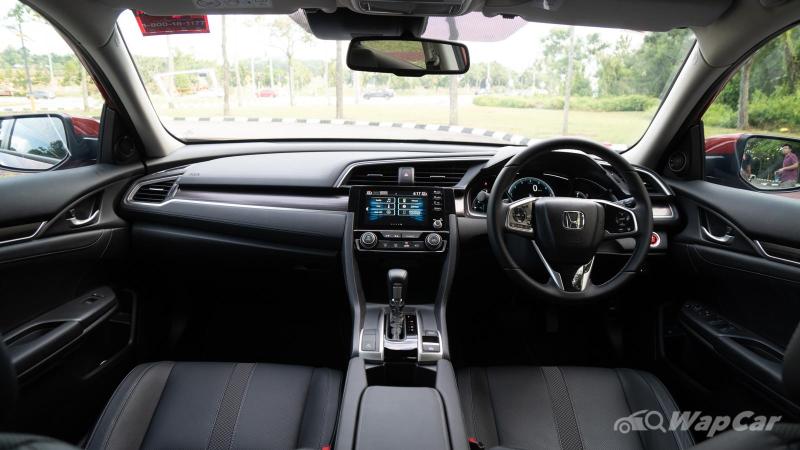 Hop into the Civic and immediately the cabin feels much wider with plenty of space to move around. Door bins are fairly large, and there’s an ingenious double-decked compartment in the centre console. Plus, the centre storage space is massive. 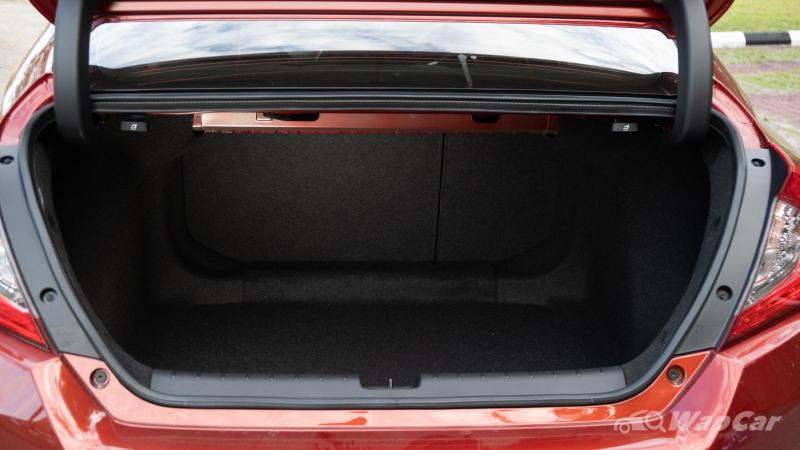 Boot space is also smaller in the Toyota Corolla at 470 litres compared to the Honda Civic’s 519 litres. This is attributed to the double-wishbone suspension in the Corolla, which takes up more precious space. 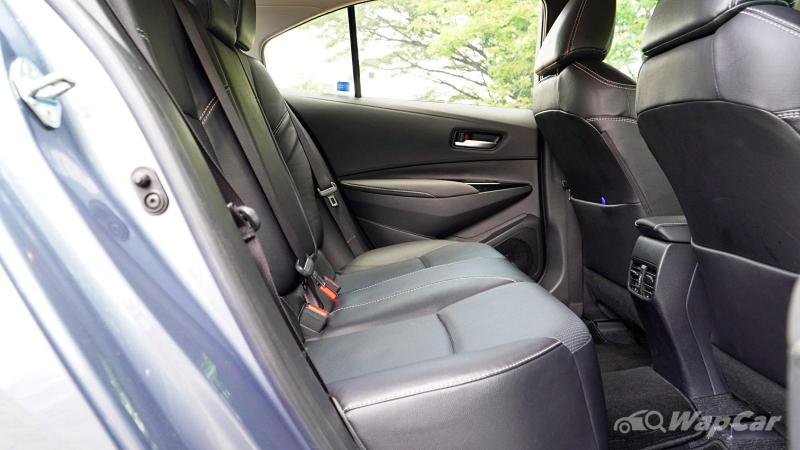 One saving grace for the Corolla is the seats are mounted higher, which allows easier ingress and egress especially for the elderly. Visibility in the Corolla is also better due to the relatively low window line, thin A-pillar and door mounted side mirrors. 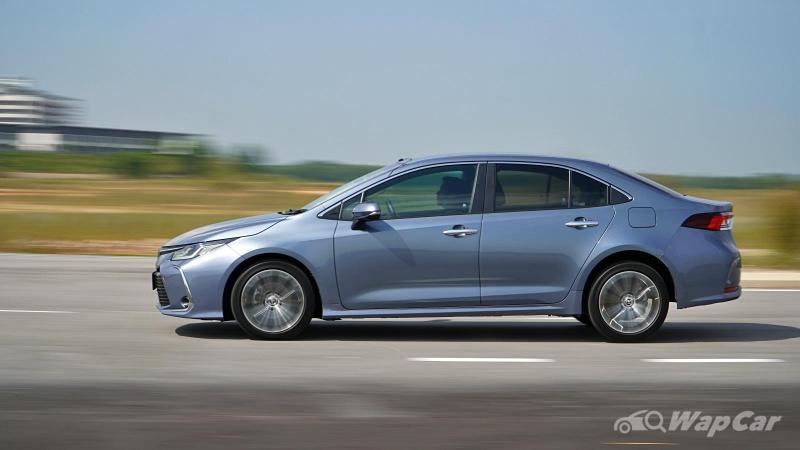 The Toyota Corolla is by far the most comfortable C-segment sedan in the market right now. The suspension is supple and the seats are supremely comfortable. Combine those with the silky-smooth powertrain, the Corolla is incredibly relaxing to drive. 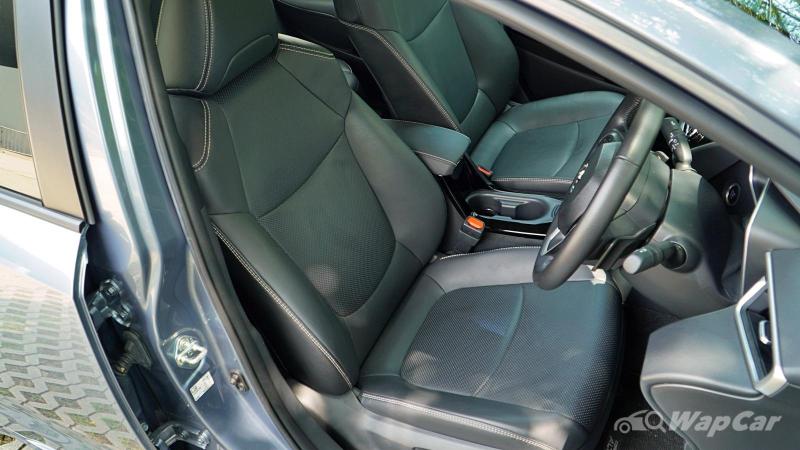 In the Honda Civic, the suspension is tuned for a more balanced setup. It doesn’t iron out bumps quite as impressively as the Corolla, but upside is the Civic exhibits less of the floatiness on highway undulations. 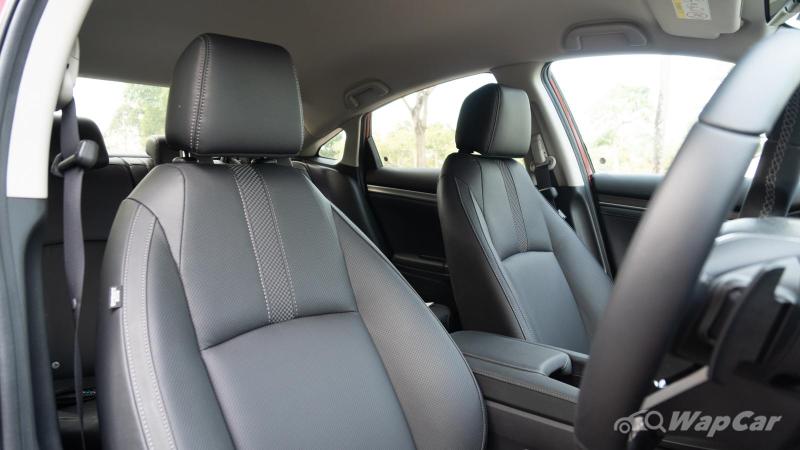 Seat comfort goes to the Corolla. Front seats are more supportive and hugs around the body. Plus, there’s lumbar adjustment on the driver side, which the Civic omits. Rear seat bench in the Corolla is mounted higher, giving a more comfortable seating posture.

In terms of sound insulation, we recorded an average of 69 dB for both cars at 110 km/h. Subjectively however, the Civic feels quieter due to the frequency of tyre noise. It’s a lower pitch in the Civic which is less tiring over longer distances. 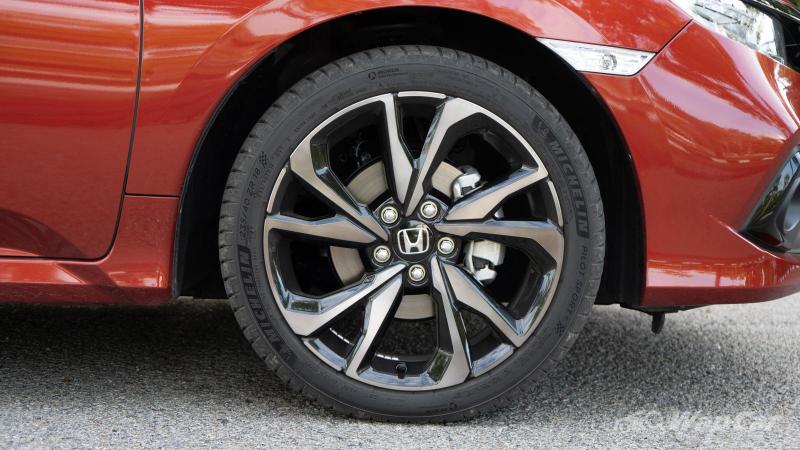 Handling is where it gets a little tricky. For one, the steering ratio in the Civic is noticeably quicker. This translates to a more responsive and sharper steering. In the Corolla, the steering is rather vague, particularly off-centre, and makes the car feel rather docile.

Steering aside however, the Corolla’s chassis is far more talented than the Civic. There’s a sense of fluidity in the way the Corolla handles and it feels utterly composed in the corners. 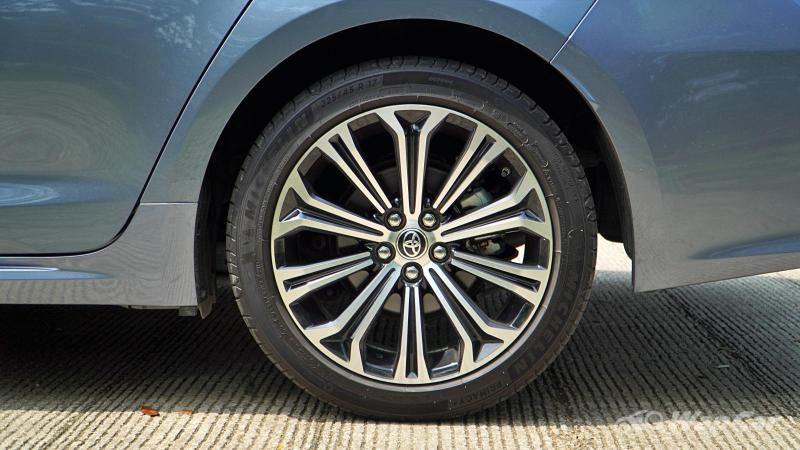 Grip levels aren’t as high as in the Civic, especially when it wears wider and stickier Michelin PS4 rubbers. Despite more grip in the Civic, it doesn’t translate to a more enjoyable drive.

To give an analogy to how both cars feel in corners, the Civic clings on for dear life while the Corolla just flows through the corners.

Which handles better? Well, this writer personally prefers the Corolla for the way it sits in corners. The fluidity and composure marks a well-sorted chassis. 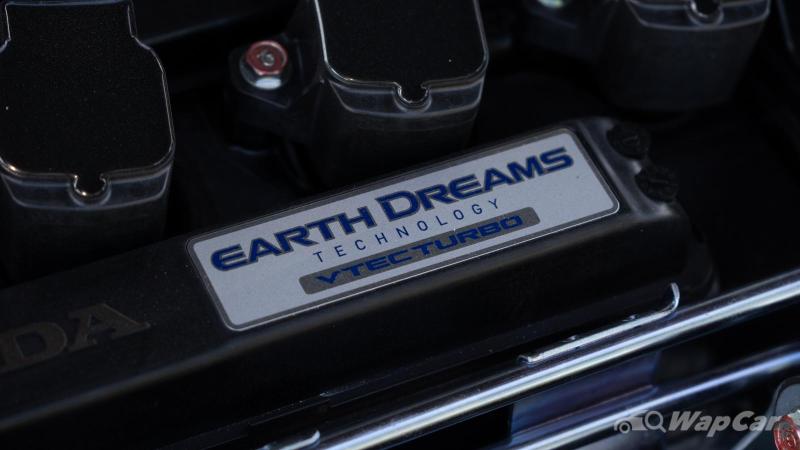 After a 100 km distance with a mix of 70 percent highway cruising and 30 percent stop-go traffic, the Civic’s fuel reading returned 7.9-litre/100 km. In similar conditions, the Corolla returned 7.7-litre/100 km. 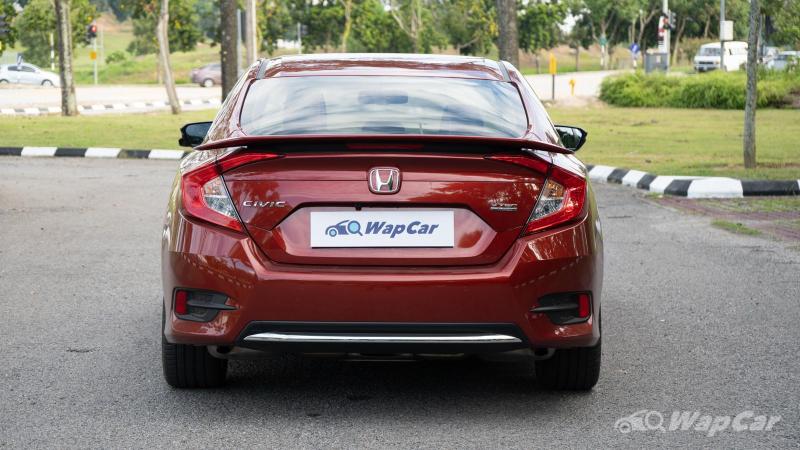 Civic has more power, more space, and more practical interior. However, the seats are rather low, which could pose an issue for the elderly. And they aren’t as supportive as in the Corolla nor is the ride quality as accomplished.

The Corolla is the most comfortable car in its segment. The suspension is incredibly pliant and seats are supportive. However, cabin is narrow and lacks storage spaces.

Advanced safety systems are a tie between the two. But overall, the Honda Civic is the more compelling package as a whole when you consider powertrain, interior space and practicality.

So, which do you prefer - the Honda Civic or the Toyota Corolla Altis?